Kalinda and Claudia by Akuva by Von Krieger 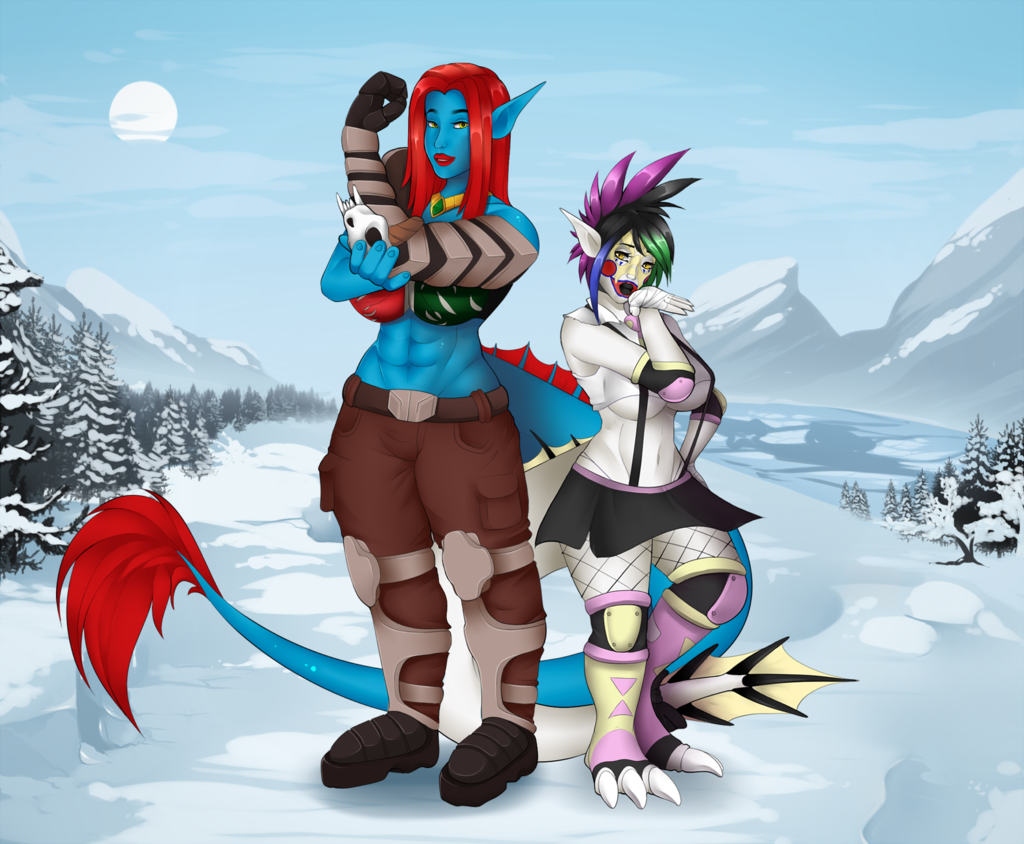 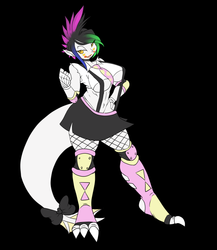 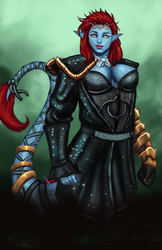 Kalinda and Claudia by Akuva

So after months upon months upon months of trying to get someone to draw Claudia properly I finally achieved success with Akuva, who I believe was wanting to draw a winter themed type background and was offering a discounted commission for it. I think. The journal I'd replied to was deleted, so I just have my somewhat faulty VK brain to reply on.

Kalinda managed to get herself yanked from her fantasy world into a modern, pro wrestling based setting, where she's been competing for the past two years.

Last year her boss in the now defunct United Livewire Wrestling had a grudge against her, and ordered her to undergo a psychological evaluation because she believed that she was a big, blue fire-breathing dragoness.

Corrupt psychologist Claudia O'Rourke, scion of a famous wrestling family, was sent to evaluate the Big Blue Beast, fully expecting a delusional human being. Not an actual fucking dragoness.

Surprise, Kalinda is an actual dragon-creature from a fantasy world and has a whole lot of weapons from said world stored in her Coat of Holding.

Memory Ripper is a scythe and actually makes for a completely useless weapon in combat. The massive blade of magical energy disperses after a single use, requiring a year and a day to recharge. It doesn't even hurt the target it strikes.

What it does, however, is unspeakably vile. Aside from the holder of the weapon, whomever is struck by Memory Ripper is erased entirely from living memory.

As far as the world is concerned, Claudia O'Rourke never existed.

A few weeks later a distraught Doctor manages to track down the Big Blue Beast, approaching her in a park, pointing a loaded gun at her.

Moderately annoyed, more over the fact that it STILL hasn't sunk in that she can't actually be damaged by non-magical weapons, Kalinda attempts to talk the doc down so she no one is hurt with a stray bullet.

Of course that's when a bunch of demons decide to attack Kalinda on behalf of a faction of infernally corrupted wrestlers.

Claudia ends up caught in the crossfire, and rather than having her live as a demonic fungus-induced rotting corpse, Kalinda uses the Hand of Arimus, the necromantic gauntlet grafted to her left arm, to pull Claudia's soul out of her body until she manages to find a way to fix things.

Unfortunately the only acceptable options are burning out the demonic infestation with a high dose of elemental energy. Claudia's given the choice of becoming a dragon or becoming undead. She chooses dragon, and the Hand of Arimus and the Manifold Matriarch (the many-head cannibalistic dragon goddess that has adopted Kalinda as her sole devotee) muck around a bit with the type.

Claudia is transformed into a mish-mash of undead, dragon, demon, and fey, the Dragonspawn ritual linking her soul to Kalinda's, and through Kalinda to all the critters Kalinda has a bond with. A familiar, a muse, a bestial companion, a dire mount, a bonded weapon, an unspeakable artifact of necromantic power, and a hydra goddess who has one head for every member of her species that she consumed.

Suffice to say the human mind is not made to handle such a sudden influx of other people's memories. And memories from things that are decidedly not people.

Claudia's mind tears itself apart and stitches itself back together. Kalinda up front states that she's no hero, but Claudia is without a doubt complete and utter pure evil.

And Kalinda's got her eternal devotion and loyalty. Oh joy.