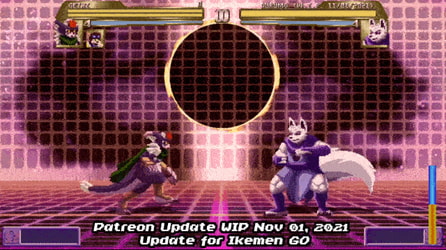 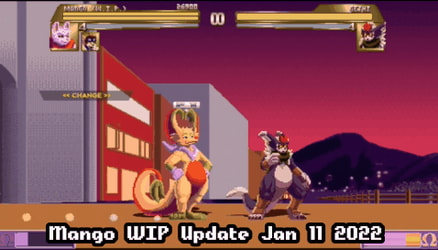 Finished Aurumo's standing 2 attack animation, with an added 2nd slash variant done by tapping 2 again, or holding it during 2.

This new 2nd slash builds damage and guard breaking ability as it is charged. So this can be used as a tool to pressure defensive play. As a weakness though, this is only a single-hit attack, so it only takes 1 parry to beat. It's also note safe on block when upclose (if it doesn't break guard) so spacing is also important.

This recording was done in the IKEMEN GO engine, using it's guard break feature, so it doesn't work this way in MUGEN1.1, but I will be making an alternative function to it force a special state when charged and do more chip damage.

I also still need to sync up my own guard mechanic to work in line with IkemenGo's built-in guard meter.

GET IKEMEN GO, IT'S BETTER THAN MUGEN. And it's actually still be developed and worked on, it has lots of new features and works with ((most)) Mugen content. Some things act differently or unexpected for one reason or another, but they are working on fixing it to make it as close to mugen funtionality as possible, but anything an also be edited to work consistently in both, as I did for my content.