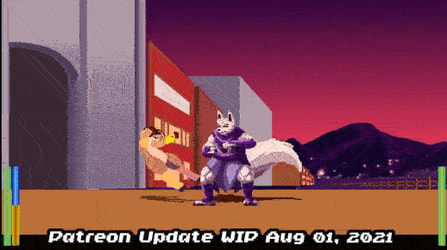 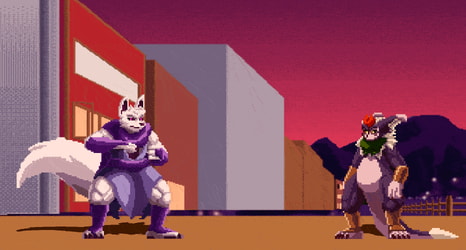 I meant to post this sooner to here, but got sidetracked with other stuff. The following section is copied over from the Pateon post. Mention of a freebe download applied to people who were current patreon supporters. I do not charge for new months when I feel that I don't deliver a significant update, or an update that I set as a goal.

This one I gave out to patrons becuase I got side tracked needing to recode my characters to work nicely with the IkemenGo engine, which is an alternative to MUGEN that is still actively being developed. It has many more features than MUGEN, is open source, and the core features can actually be rewritten. It's also not comercially locked, so it's more open ended and I want to spread awareness of this engine's existence, because even in it's unfinished state (v0.98 at the time of posting) is superior to Mugen.

So the goal of this patch was mainly to make the characters handle consistently between the two engines, but later on, Ikemen-exclusive versions of my character will be made to take advantage of the newer Ikemen features that will break Mugen if I add them in universally.

[Quick patch 11/13/21] Just posting this up at the top of this post. I noticed that Aurumo and Feliro's Omega supers didn't activate when the meter said so. I forgot to change one number in the two of them to match the changes I made to Omega meter. Feliro's move still have a sync issue when in tag team mode which I'm going to figure out for next update.

Download of all 3 characters included in this update are attached to the bottom of this post!
It's not the work I promised to have progress on, so I'm not charging my current patrons again for this month on the 1st. The discovery of IKEMEN GO and it's improvements on the MUGEN engine compelled me to make this update.
All 3 characters should now play and handle the same in both engines.
Soooo, here's an update that took a good chunk of my time on this work this month. I worked heavily on debugging and and gettin my character to work nicely in Ikemen Go. Due to some differences in the engines. I ended up reworking my code for the movement/control features of them. There were BIG issues with compatibility that made my characters not function well in Ikemen Go.
I recoded testing update of Gejhi is also included in this update. He will get a public update once I am certain the recodes are working as intended, and I give him a few more updates, but he's gotten a long list of bug fixes to his system that the WIP's have gotten, and someother adjustments I've been working on. I also just need to work out a few small issues with his AI.
The reason for this sudden change for Ikemen Go compatibility is because it is a supririor engine to mugen, having many more features and actively being worked on, as the base Mugen had suddenly stopped development years ago, and it is a dead-end. Ikemen is greatly expanding on MUGEN while trying to be compatible with the stuff made for Mugen, but there are some issues they are still working out on that side of things. The biggest reason is for tag-team modes, which I've made the default play mode in my build. It's the main play style I want (2v2 tagteams in particular).
My recode is actually overall beneficial to my play design because now I am using an invisible helper entity attached to the characters that read the player's inputs and convert them to absolute left and right inputs, rather than forward and back, so this makes certain aspects of my control system much better, as well as opens the door to more input commands for specials, like half-circles or fow, back, fow type commands.
For the most part, I think all is working well with them all, but I seem to run into a small issue with Aurumo that I haven't found yet. It's rare, but he seems not to turn correctly for certain actions, seemingly at random, but I think it's conditional and is something I missed in his code. I dont wanna delay giving you folks an update any further, so here's the re-coded builds as they are.
Aurumo does indeed have some updated animations but not a a whole lot yet.
Aurumo's Forward-2 works differently now. It has a 2x damage sweet spot at the very tip of the poke. It reaches a bit further but does not slide as much. The attack can be dash canceled forward when it hits a target.
I did noticed a rare glitch, when playing in Ikemen where Aurumo can get stuck in the delayed CryoSphere animation sometimes. I think it's due to a very specific frame timing causing it with input and a variable not changing correctly on that frame, but I'll get that worked out.
In Ikemen's tag system, I did add in some custom stuff to make them move a certain way, but it's not perfect. The vanila tag system for ikemen changed in the 0.98 update, so I will be coding further to add in combo tagging to my system.
One change for tag-team (also effects mugen's simul mode) is that my characters will share the Omega meter. So when it's active, only one of them can use it, then it will reset to empty for both when used.
That's all for now. Thanks all for stickin around, Happy Halloween. Current patrons, enjoy the free update.