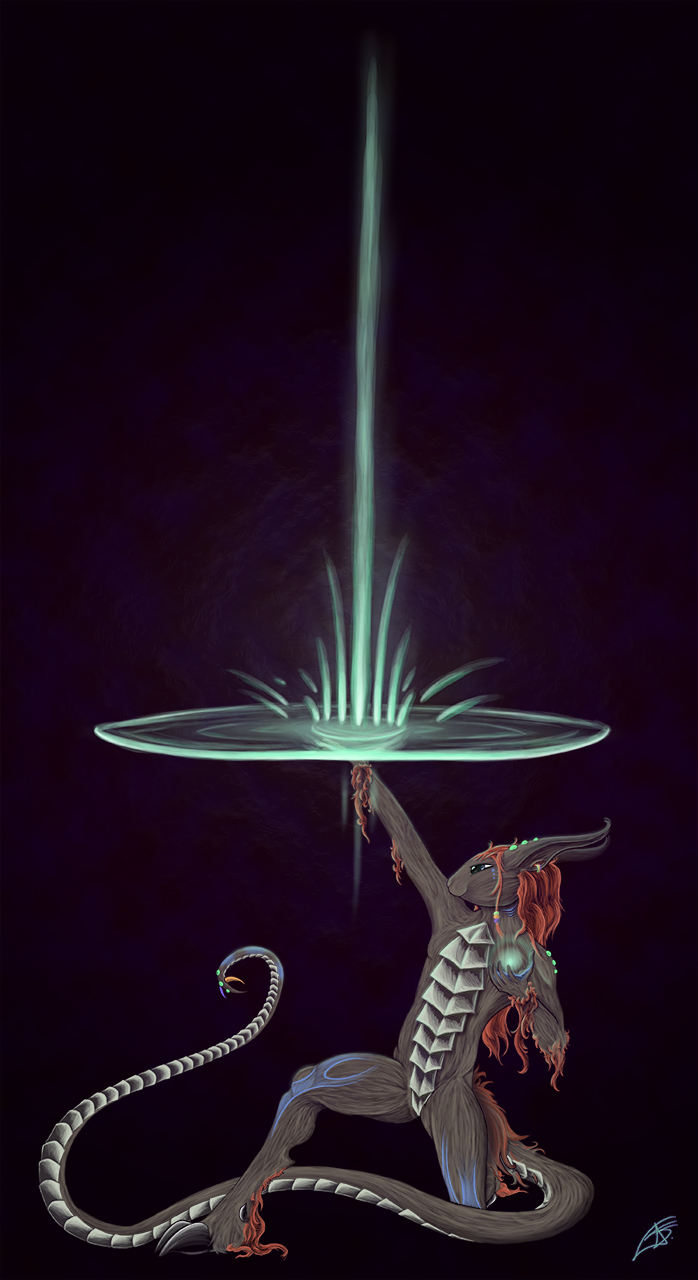 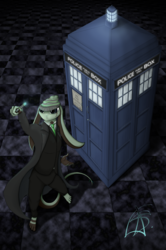 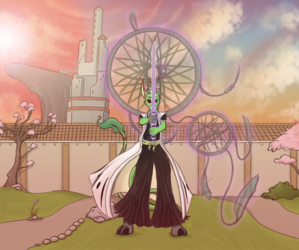 Descendants of the Ancestors, predecessors to the Space Bunny species: * The Ancestrals. *

Aptly nicknamed Sea Bunnies, there are only nine Ancestrals.
Each is well equipped to various climates and the water. They have membranes between all fingers and thumbs (both hands) for manoeuvrability in the water, as well as speed. The knees have special water membranes as well. This also helps with movement in water.
Their mane/hair seems to be very thick and heavy, yet the opposite is true; The reasonably thin hair is covered in a special substance making it seem thick, full and vivid. This also prevents the hair to absorb water and create a heavy weight on the Ancestral's heads. (The substance is also plainly known as grease in our language.) Yet when one would touch the hair, it would not feel greasy. Rather, it would feel extremely soft. This is due to the special substance of the grease, giving it a velvety feel.
Scales run from their chest until the tip of their tail, offering protection to some very vital organs.
The long tail is often used for balance, on land and in water. Besides balance, it also provides another way to steer and move properly and quickly in water.
Digitigrade legs provide a lot of strength and stability as well and are very good for long runs and short fast sprints. They can reach up to speeds of approx. 88 mph (~ 141 km/h).
The hooves are used for grip during running, climbing, and underwater to hold onto thick and sturdy water plants in order to stay in place.
The hands have retractable claws. These claws are used for fighting, but mostly for burrowing/digging, and for more activities which claws are needed for in order to work refined and detailed.

Every Ancestral has two differently coloured spikes on the tip of their tails. Each spike has a vibrant colour, portraying what type of poison or toxic it produces. The more vibrant the colour, the stronger the effect it has on the one stung by it. Ancestrals are immune to their own spikes, as well as of any other.
Red: Gives the victim the feeling they are burning. In severe cases the skin actually starts to burn and the victim -when touched- will feel red-hot.

Each Ancestral represents a certain aspect of the universe. From elements to space and time itself.
This Ancestral, shown here, is named Solus Zelt and represents: Wisdom, art, originality, the mind.
Solus Zelt forms a symbolic triplet with two other Ancestrals. The triplets together represent birth, life, and death. The progress of creation.

Ancestral/Sea Bunny created and owned by©:

All rights reserved.
No form of reproduction of this character or image, including copying, alternating, manipulating or printing is authorised unless you have written permission issued by Ventus Fall granting specific usage rights.