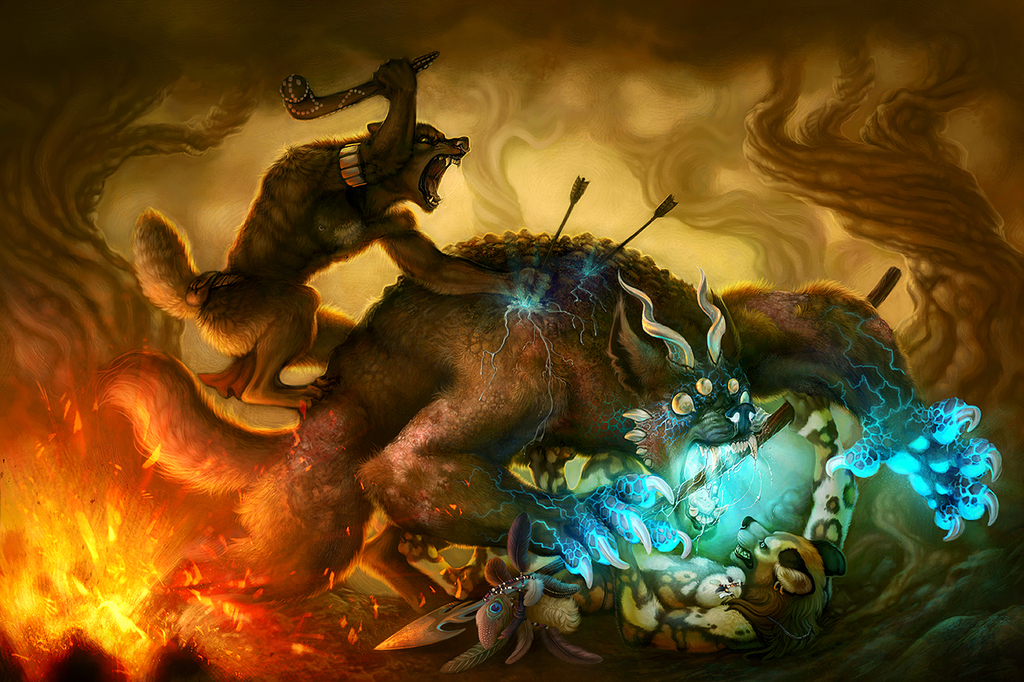 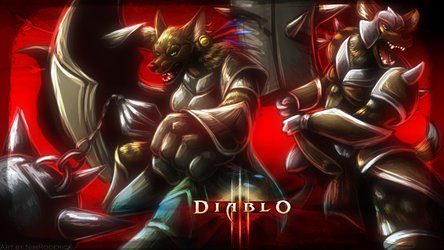 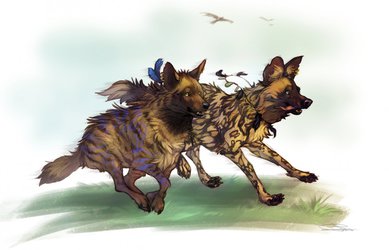 The tribe’s shaman had made mention of a black wolf near their lands, the earth having told him of his passing, and this had been confirmed by a scouting party just a few short days ago.

“An all-black wolf with white on his chest,” Kimya had said upon his return, and Utunu’s ears perked at this. Excitement at seeing his friend again warred with concern as to why he had traveled all this way. Hastily the painted dog made sure his spear was sharp and his beltpouch packed with all he might need, should danger strike, and set off in search of the wolf.

“I hunt alànkòk,” explained Smokepaw haltingly in Utunu’s language, later that evening when the other canid had found him. Confused by the unfamiliar word, Utunu asked further, and Smokepaw did his best to explain with the few words of Utunu’s tongue that he had learned.

“You know metal, metal on Smokepaw?” The wolf pointed to his various rings and piercings, and Utunu nodded. It was some special metal, found only near the wolf’s lands – it had something to do with the strange light patterns in the sky that occurred far to the north, but beyond that Utunu really knew nothing about it.

Utunu nodded again, seeing where this was going. “And you were sent to hunt it down?”

They made camp not long after, and there Smokepaw did his best to explain the dangers of creatures corrupted by the metal – a bite and claw made from the mercuric silvery-white metal itself, their fury and insanity, and their immense strength and quickness. The light of their brightly burning fire kept the shadows of the dense forest around them at bay, but couldn’t quite disperse the fears from either of them, realizing the foe they might face.

But they were given little time to reflect, for the Alànkòk was upon them!

Another awesome piece of artwork by HanMonster!

Smokepaw and I had been thinking about a possible battle scene for a while, and some of the lore regarding Smokepaw's tribe led us to the story above. And of course, we HAD to ask Han to art it up, because corrupted monsters are kind of her thing. :) Thank you so much, Han! I'm thrilled with the result, and I'm pretty sure Smoke is too!