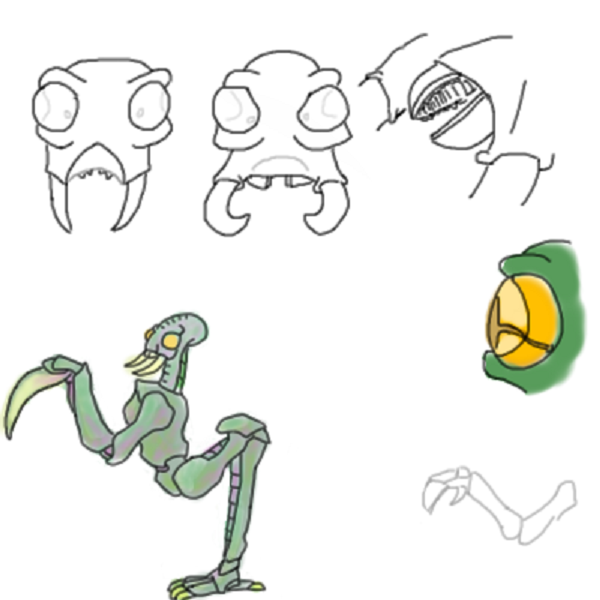 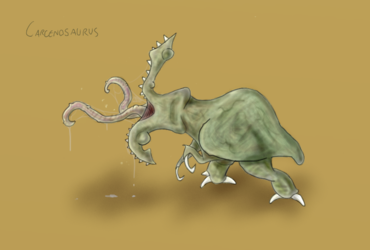 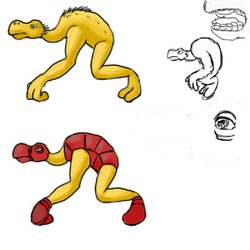 The example one on the bottom left is a too bulky. A civilian Ensu would have a thinner carapace and more exposed segments like the head, which has a texture more akin to a stiff reptilian skin. The pictured one is more military, with it's shellish structure allowed to grow out "un-braced". The Ensu design was always meant to be somewhat bulky and unsuited to typical civilised space-preserving architecture, but seeing them in "full shell" always makes me want to re-do them. They're far too robotic looking. I need to find a way to add a few extra natural curves, despite the decision to keep the unwieldy striding legs. Babbling ahoy~

Physiologically, they are pretty hard to describe. The exoskeleton fuses and anchors to the bodily structure in varying points across the entire body. Beneath this is a dermal layer covered in scutes that vary between leatherish scalework and overlapping boney plates. The exact construction of the skeletal frame still needs to be worked out, and would also vary between individual lines. It would sometimes result in movement problems that require surgical correction and braces to ensure proper regrowth. The 'scythes' can grow to great lengths, but are naturally trimmed through use, and like some of the other plates and non-vital structure, can be shed in cases of bad fractures and then regrown. The external skeleton shifts in hue over long periods, unconsciously following the most dominant colours observed by its owner, with any markings or patterning generally being low-key and somewhat randomly organised, favouring variations of a single colour. Each wrist has two opposed thumb-claws that remain tucked back flat against the arm, but provide some rudimentary grasping ability. This needs to be re-thought once I determine more of the Citizens of Wait's history.

The eyes are membranes filled with a protective humour, housing a photosensitive tendril of sorts that acts as the core sensory organ. In most conditions, it is retracted into a notch at the back of the socket, but for sharp focus or determining things at longer distances, it will press the receptive tip against the wall of the eye, which to onlookers gives an appearance of a typical pupil. The eye itself can be totally reformed within a few days if perforated, but the 'nerve' tendril takes far longer to heal if damaged, though is rarely permanently impaired. The two main fangs are simple grasping assists for eating, and may be partially retracted or extended. Like the 'toes', they have great grasping power, and depending on heritage, they may be ribbed and tusk-like, or may feature limited-motion joints, or may be more akin to full-motion talons.

Their sapiency was discovered by the Shigyan shortly after employing them as work-animals upon colonising their planet, the delay owing entirely to the Ensu collectively wanting to observe their new surroundings and relationship as a priority over initiating full contact. The Ensu were quickly able to learn a base dialect of the Shigyan, and were then elevated to citizenship after some confusion. Few individuals stray from their companion races within the Wait Communes as they are often subject to discrimination and are typically treated as second-class citizens elsewhere. This may be due to their heavily muted expressions and unwieldly physical state making them appear borderline feral or sub-sapient. The only reliable external success has been in criminal pursuits or as bodyguards, due to their physical affinity and co-dependant nature.

Their role in the Wait communes is heavily physical, often found in law enforcement, military, construction and manual work. Whilst in actuality they are intellectually capable, they simply find it harder to flourish in competition against species of greater natural mental flexibility. They are great logical thinkers and logistical processors, but have difficulty with creative or lateral thinking, yet are almost entirely at peace with these shortcomings. Their species common sentiment is that they "simply don't belong" when away from the painfully over-accepting Wait communes. They prefer to be coupled with understanding individuals or organisations that can assist them with their communication issues and treat them as equal citizens. Even for a lack of fine dexterity, they are quite strong and have almost impossibly fast reflexes owing to their insectoid nature.

Their name is something of an odd point, as they originally referred to themselves with a short 'word' composed of a buzzing-hiss followed by a soft verbal click, which is closer to "Nz-tok". Through a number of iterations and foreshortening, they were satisfied to accept "Ensu" or "Ensu-tk", which sounds similar to a word meaning "Keeper" or "Watcher" in their older language.