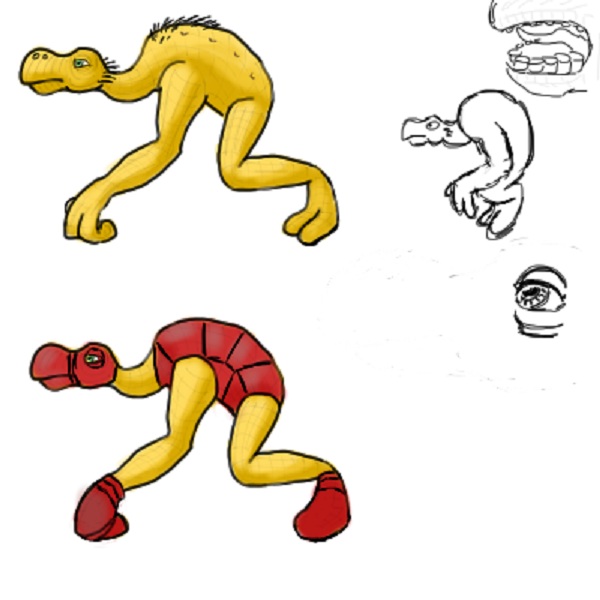 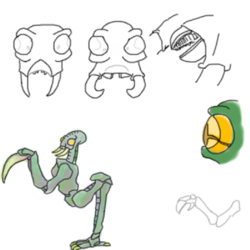 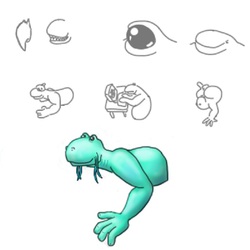 More old oekaki self-reference stuff. As per usual, the rear limbs aren't present, due to laziness.

The Mugg secrete a red, waxy substance that upon exposure to air begins to set into a hard, flexible state. Their ancestors habitually 'groomed' themselves, spreading and sculpting the shell into even, flat amounts and ensuring fissures and worn patches were repaired. Their limbs and neck only received token attention as the constant flexing and movement disturbed and shed the hardening resin. In modern times, young adults have the glands that produce it surgically removed and transferred to enclosures to artificially farmed the fluid. Though it comes with a cultural pressure away from their homeworlds, deciding to have them removed alleviates them of a extra hygiene burdens. The contrasting colour of the shell made for an amusing species that appeared to wear shoes, gloves, jackets or helmets. I imagined them to have a naked appearance of vaguely camel or turtle-like qualities, but I still need to work in a slight insectoid feel to go with the gorilla-shaped frame. SO EASY.

Anybody unlucky enough to be struck by the acrobatic strikes of a primal Mugg would quickly find the density and hardness is comparable to ceramic, but with a certain plastic flexibility. Another early surgical procedure is to separate the digits on their hands and feet, which are normally fused together from birth.

The Mugg have a tendency to approach life with a slower pace than most, daydreaming, observing, pondering... preferring a sedentary trundling lope on all-fours than any amount of upright pacing, like some kind of strange, lighter-toned lumbering camel-turtle. Similarly, with their extremities freed from their natural fusing, they often resemble primates due to their nonchalant brachiating, making full use of all limbs to swing between footholds without a second thought. To them, the ability to hang upside down or swing with perfect balance between anchors is just a natural, boring method of getting around. They are perfectly capable of faster paced living, and have the full array of emotional and social capabilities, but are given to constant bouts of dormancy and contemplance when left unstimulated.

Within the Wait communal cities, they often dominate the diplomatic and official positions, able to maintain an even keel in the face of most difficult customers. Where the Shigyan are the heart and soul of Wait, and the Ensu'tk are the unphasable backbone, the Muggerat are considered the intellectuals and the voice of reason. Many outgrow their simple Waitian life and cast their lot out to the stars with relatively assured success. Plus, they make great straight-men in comedy duos.

For a terran reference point, disregarding the obvious disparities, they are like an odd mix of ape and camel, with a similar natural vocal overtone. The similarities to turtles is only really in beaky maw-shape and preference for slow lifestyle. Trying to visualise variations from bloodlines will need more work.