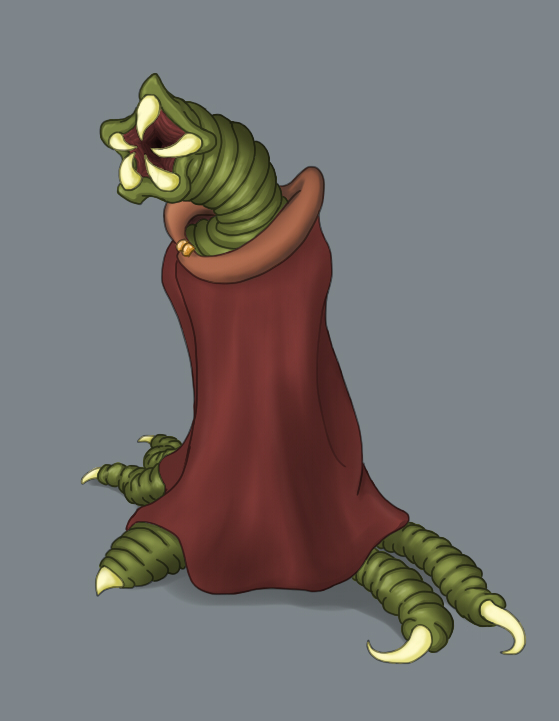 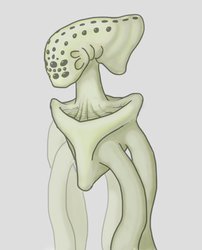 They probably evolved from anemone things that used those prehensile legs to anchor themselves on rocky formations within fast moving currents. Now they just use the frontal 'foot' to support their weight in a hunched shuffle, while the longer ones at the side deal with most of the ambulatory motion. Though I guess I could see them skittering around in a sort of uncoordinated mess of tentacle-like flopping, swaying their head around in an effort to keep balance.

I imagine them to talk in belch-ish, overly squelchy Donald Duck noises punctuated by the clacking of their unwieldy teeth. Those big gnashers are more for gripping and 'jousting' in self-defence, chewing would take part all the way down the central column with each of those muscular rungs sporting barbed grinding palates of sorts. No, those aren't shoulders, they just have amazing muscular control, and would expand those rungs to support a cloak and present a less intimidatingly alienesque profile. I'm sure if food gets stuck then all that muscular control would come in useful for ejecting the blockage, naturally covered in nasty stringy gunk and then probably eaten again by a different Sithej, complete with obnoxiously loud crunching and slurping. Their entire body looks like it would have the same ability to flex, compress, stretch and expand as the 'neck', so they probably don't have a conventional skeletal structure beyond a bit of supporting cartilage.

Trying to imagine a spaceship interior designed to be operated mostly by their mouths is hard, but amusing. I mean, once you get past the slobber on everything, watching these dudes blindly groping about with their mouths to find the gear-stick could be adorable. It also kinda sucks that I zoomed in way too far and spent time on the mouth interior, only for it to be pretty invisible when zoomed out again, haha. Hmm, maybe I should have given them a long, prehensile tongue. Actually, yes. That's canon now. Brain says so. It's just not shown here because... reasons. Hell these guys could even have evolved from the Clingworm when you consider the structural similarities.