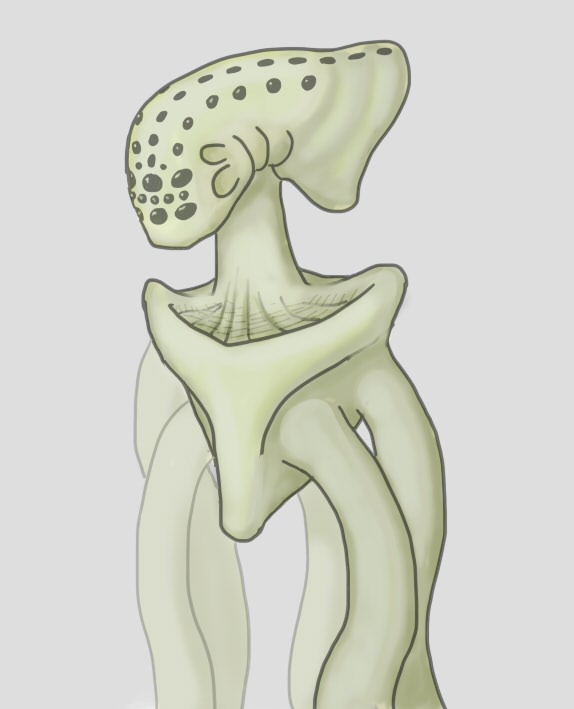 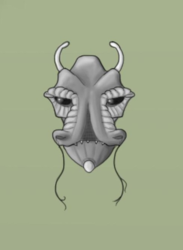 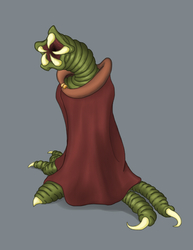 I did this when I finally got around to trying SAI, and man was it ever good to be able to use a selector tool again. ArtRage2 was fun and all, but it wasn't so hot for stumbling beginners like me. Making aliens is hard. You get stuck between trying to make them unique and trying not to over-humanise them. Too alien and they become hard to connect with or describe properly in a story. Too human and they feel, well, like humans, which ruins the aesthetic and kills some of the suspension of disbelief.

The fine-print of the design hasn't been settled yet, but this is one of the dominant spacefaring species in Luros-B. While individuals have a fair variety in eye positioning, the default is giving me some problems. It naturally looks better for them to be speckled at the front of the head, but they're also supposed to be spread along the top of the head too. Just making the ones on the front look correct is hard. The original MS-Paint doodle I made before Spore's release was better, heh.

The folds at the neck and the dimpled gaps in the side of the jaw are a sort of filter/gill system, with a sectioned lung inside the neck and slightly inside the collarbone area. Most of the vital organs are comparatively small in size, but supposed to be really efficient. The mouth positioning is also giving me some troubles. Is can either be located under the chin or inside the rear hood, as it is two muscular pockets ringed with tooth-like structures that provides a simple yet powerful crushing contraction. Kinda like a lamprey mouth but with two independent palates and for squeezing/crushing. In polite society I imagine their food to be typically served into spherical containers which they pull into the mouth and then drink from.

The cresty flap thing at the back of the head is useless now, but was originally used to disturb the ocean floor to discover food items. In relation to their current upright status, prior to sapiency they would have laid on their 'back', using the hood to comb for food (and quickly restrain it once discovered), then the tentacles they used for anchoring and locomotion would be used to transport it to the mouth (if located under the current 'chin'). The neck would have been mostly invisible at that time, as the chin would be broader and slot almost perfectly to the form of the collarbone. The lung it now contains would have been something like a muscular bladder to stimulate motion through the gill area, at least wherever they were in places with particularly slow or still waters.

Oh yeah, and the tentacles end in singular flexible bowl-shaped cups a little bigger than the thickness of the limbs. Shalthar are technically very strong, but because of their low bodyweight they find close combat and manual tasks to be difficult. It's hard to kick someone's ass when no matter how hard you punch, the force pushes you away and leaves them stationary. The exact proportions of the limbs aren't certain yet, but they have five tentacles arranged in an arch along the back of the torso section. Designing clothes and common technology for them still remains to be awkward yet kinda fun...