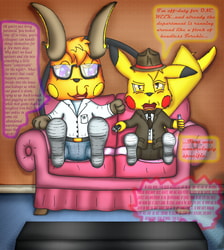 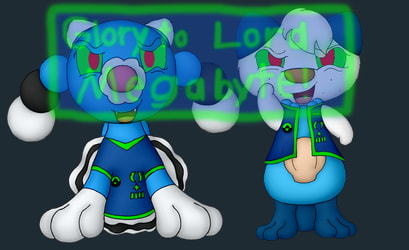 A mini-comic commission for

featuring his Pikachu/Espeon hydrid OC, Queen Luminia Aramis, having found herself mistaken for a goddess (due to her unique appearance and psychic abilities) by a tribe of bear-Pokémon Subsume that are totally not just Ewoks but in Pokémon-form. ;3

Things started out fine enough with the tribe fanning her with fig leaves, crafting a throne out of sticks, etc. Embarrassing but innocent enough. Buuuuuut then there was the little revelation about this tribe's "customs."

See...the Teddiursa and the Pancham here, as it turns out, are "male virgins in their prime" (20-something in age) who have offered themselves as "sacrifices" to their new "goddess." The ritual demands Luminia may only select one of the pair to become her "personal trophy-mate"...and the other must be served to the new "couple" as a ceremonial banquet. Being the pacifist that she is, Luminia does not find either concept appealing in the slightest...but if she doesn't make a choice by morning...the tribe could break out into full civil-war, taking her rejection as a sign of great dishonor upon the entire clan. And if she informs them that she's not actually a goddess...then it could be her own hide on the roasting spit. So there's that.

(Side-note: This took my four whole days to complete, partially because of lack of energy/motivation, but also because the Photoshop file got so big it took several minute to select any tool from the side-bar menu, or even scroll the page. XD)