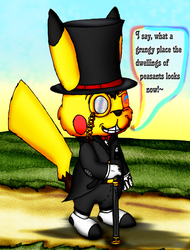 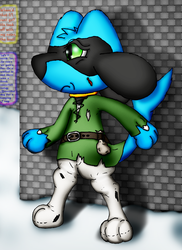 "On the Dance floor, Kari Savvy, sometimes called 'Plusie' by fans, is one of the most graceful and elegant light-footed ballerinas you will ever see.

In the dress room...her fellow dancers see a very staunch contrast to that facade..."

So, out of inspiration from a short RP I had recently, I decided to give my kinda forgotten Plusle OC, Kari "Plusie" Savvy (Adam Savvy the Engineer Minun's cousin) a complete character overhaul. Or...more accurately, more "maturity," as when I first designed her years ago she was barely a teenager and had a personality similar to that of Dee Dee from Dexter's Laboratory.

As you can see here...she's a fully grown adult and age and experience has made her..."saucy." XD

I also decided on giving her a thick Scottish accent, since canonically the Savvy family has roots in North Galar, but where Adam's accent faded over the years living in other regions, Kari spent most of her youth in Galar, and thus her accent is much more ingrained. The attitude...well that's just a combination of pushing her body and mind to the limit in her dancing career (her instructor is borderline tyrannical in demanding perfection from her performers), and spending too much time in pubs watching wrestling matches and raunchy slapstick comedy in her free time. XD

The format is loosely inspired by those "Expectation vs. reality" and "What you see vs. what they see" memes. Maybe I'll do more if I feel included or is someone wants to commission another drawing in this style.