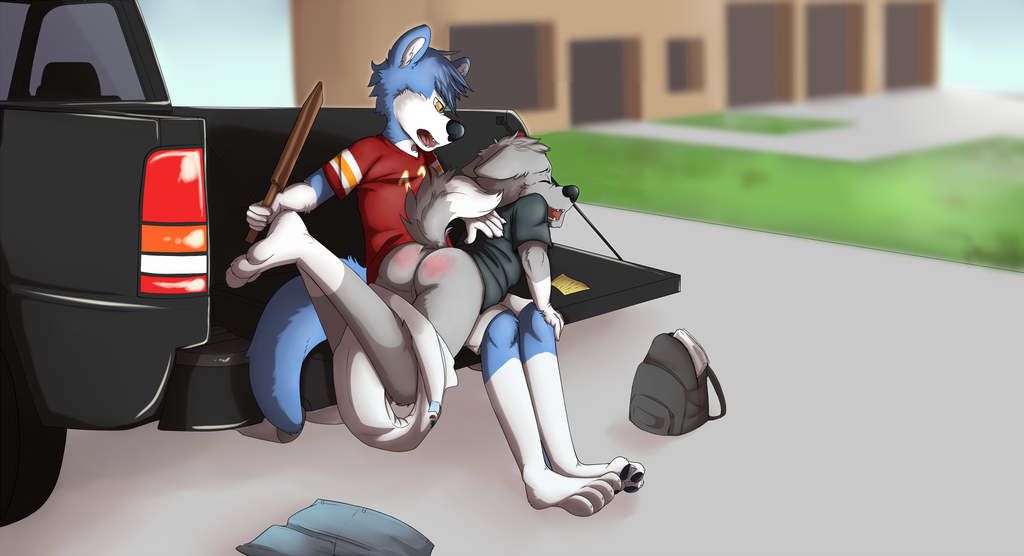 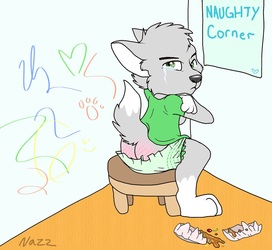 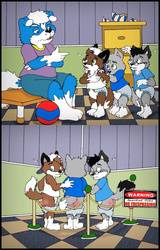 This picture was drawn by Toybadger and features Caiden and Island. The story is by me.

Caiden floored his truck down the highway. Today was the day that Caiden was going to visit his friend Island for the weekend. Caiden was already padded and excited for a cubbed out weekend. They had a trip to the zoo, park, and movies planned. All of that was just on Saturday! Caiden was so excited that Saturday morning that he got in his truck and zoomed off to Island’s as fast as he could.

The speedometer hit 75 mph. Caiden was usually a safe driver and rarely speeds, but today he was more excited about the visit than the rules of the road.

…85 mph. ‘Wow, this truck has some pickup.’ Thought Caiden as he pushed his truck further.

…95 mph ‘This is awesome!- Wewoo! Wewoo!’ thought Caiden until he saw the police car hop on his tail and pursued after him.

“Shit.” Cursed Caiden to himself as he glanced down at his speedometer and it was at 98 mph.

Caiden pulled over to the side of the road and the police car soon after. He was really nervous now as he had never been pulled over or gone that fast and got caught for it. Caiden glanced in his rear view mirror and saw the tall giraffe police officer get out and start to walk to Caiden’s truck. Out of fear and anxiousness, Caiden flooded his diaper. Lucky for him, the diaper did its job and didn’t leak.

“License and registration please.” Said the officer sternly as he did not look pleased.

“Y-yes sir.” Stuttered Caiden as he reached for his backpack in the passenger seat to grab his wallet.

Caiden carefully tried to pull his wallet out without showing the diapers and changing supplies that were also in there. Caiden had a black backpack that doubled as a diaper bag to be more inconspicuous in public.
Caiden handed the giraffe his credentials and the officer swiftly took them.

“Mr. Smith, do you know why I pulled you over?” asked the giraffe as he took off his glasses and stared at Caiden.

“Yes, but not just for a couple miles over the speed limit. You were going 98 mph in a 65 mph zone. Are you aware how dangerous that is in this type of vehicle, not to mention that it’s also illegal.” Lectured the officer.

“I hope that it doesn’t. You know with you going that fast over the limit I can throw your ass in jail.” Threatened the officer as Caiden was visibly shaking now, “but since this is your first offense, I’ll just write you a big ticket and require you to take a week long drivers safety course.”

“Oh thank you officer, thank you. I’ll drive safe and sound from now on.” Thanked Caiden as he was relieved that he wasn’t going to jail…especially with the wet diaper on.

“See that it doesn’t happen again Mr. Smith. Have a nice day.” Replied the officer as he ripped a copy of the ticket for Caiden and went back to his vehicle.

‘Phew, that was a close one.’ Thought Caiden to himself as he put the ticket in his diaper bag and glanced at the clock, ‘Oh man! 10:00 AM! I’m already late.’

Caiden carefully got back on the highway and drove to Island’s house carefully.

Caiden arrived about half an hour later and pulled his truck into the driveway. Island saw Caiden pull in and went out to greet him.

“It’s 10:30. You said you were going to be here an hour ago. What took you so long?” asked Island as Caiden got out of the truck with his diaper bag.

“Oh, yeah. Sorry about that. I had a little trouble on the road.” Replied Caiden vaguely.

“Well you should have called me. I could have come and helped you out. Your truck seems to be fine.” Said Island as he did a quick inspection of the truck thinking that Caiden’s truck broke down.

“Oh, the truck’s fine. I uh, kinda got pulled over.” Admitted Caiden as Island glared at him.

“What do you mean ‘Kinda’ got pulled over?” Asked Island sternly

“I was a little excited to get here and I didn’t really notice how fast I was going.” Replied Caiden softly.

“Ah, you don’t need to see that. It’s just a paper saying that I went too fast.” Replied Caiden nervously.

Caiden had been going through a spell of lying recently and Island wanted to make sure he was getting the whole story. Caiden fuddled through his diaper bag and pulled out the ticket and handed it to Island.

“98 in a 65! Caiden! You weren’t just going a little over, you had to be trying to go that fast on purpose.” Lectured Island, “You got a fine AND driving school!”

“Yes, but it’s no big deal. I can afford the ticket and I’ll find time for the school.” Said Caiden

“That’s not the point Caiden and you know it. You could have gone to jail for going this fast don’t you know! That wouldn’t have fared well for you would it? Especially with what I suspect is at least a wet diaper.” Said Island as he did a quick check of the front and back of Caiden’s diaper.

“It wouldn’t have and I’m sorry Island… It won’t happen again.” apologized Caiden.

“It sure won’t. Especially after we have a LONG conversation about it.” Threatened Island as he grabbed Caiden by the wrist and brought him to the back of the truck.

Island pulled down the tailgate and turned to Caiden. He pulled down Caiden’s pants swiftly and Caiden naturally pulled them back up.

“Caiden. You take off your pants right now or so help me I will go inside and get the strap.” Threated Island as Caiden let go and Island took off Caiden’s pants leaving him in a wet diaper.

Island reached into Caiden’s diaper bag and pulled out his paddle. Most of the time that Caiden got spankings it was for fun or light punishments when he was cubbing out. Rarely did he get spanked for things he did outside of that.

“Bend over my lap Caiden.” Demanded Island as he pulled Caiden over his lap.

“AAwww….please Island….Can’t we do this inside…” whimpered Caiden as his diaper was pulled down to his thighs exposing his bare bottom.

“No sir, if you want to act out in public then we’re going to correct in in public.” Replied Island as he raised the paddle and brought it down swiftly on Caiden’s unprotected rear.

“You know better than to speed Caiden! What were you thinking?!” asked Island as the spanking continued.

“That’s right it won’t happen again. You know it’s against the law and you did it anyway. I don’t care if you’re going to be late somewhere. You. Don’t. Speed.” Continued Island as he spanked during his lecture.

“OW! OWIE!....ermmm,…Ook! OK! I won’t speed! Wwhaaa….” Squirmed Caiden as he started to tear up from the pain, “Please Island Hic people are watchin….”

A few of the neighbors heard the commotion outside and decided to take a look. Luckily, most of the families were away and the ones that were watching were already aware of the cubbing out and ageplaying.

“I don’t care who’s watching. Maybe you’ll learn to obey the rules of the road next time. Also, the next time I ask you a question I expect the truth. The WHOLE truth. No more lying.” Spanked Island a little harder.

“WWHAAa….OWOWOWOW!....I’ll never do it again….owieowieowieowie…..!” cried Caiden as his bottom was turning fire engine red.

“The worst part of all of this is that you could have hurt someone else or yourself by being so reckless. Going that fast in a vehicle like this is very irresponsible. You could have hit a family or bystander if you lost control.” Reminded Island as the next few swats were the hardest as to drive the point home.

“WHWHWHWwHHaaaa……! OWOWOwHAHAha….!” Bawled Caiden as he could do nothing but cry and squirm.

“We had a whole lot of fun activities planned today, but after this little stunt I’ve decided to cancel them. In fact, you’re going to spend the rest of the day in your room and you’ll get no dessert until after your driving classes. Do you understand?!” asked Island as he finshed up with five more first swats with the paddle.

Caiden nodded as he couldn’t verbally respond with anything other than him wailing.

“OK stand up.” Instructed Island as he let Caiden up and put the paddle in his diaper bag, “Now march inside so we can get you in a clean diaper then it’s straight to time out with you.”

Caiden grabbed his shorts off of the ground and pulled his wet diaper up enough so he could waddle inside with his glowing red butt.