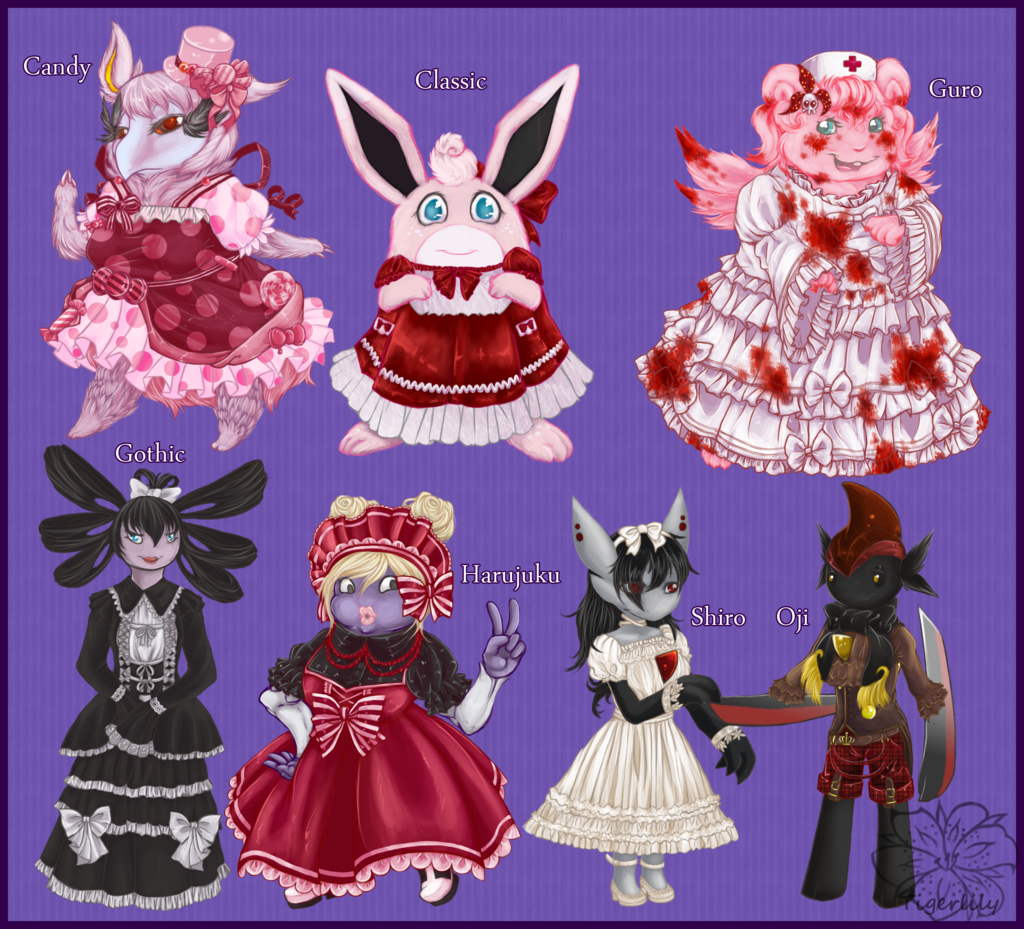 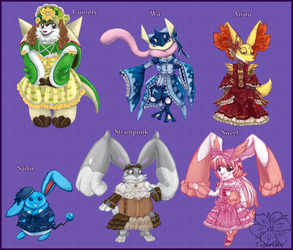 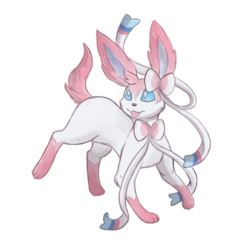 Kirby is in the horror type lolita called Guro, the outfit is an inspiration from this picture. This is probably the hardest
one out of all the dresses with so much ruffles and details of the dress. But I'm very satisfied with the blood and the
color I put into kirby! :3

Classic lolita I felt fits this pokemon. Simple clothing(there's complicated ones but I thought a simple classic lolita
would fit wigglytuff very well) I added 'spotted' freckles on wigglytuff and this wigglytuff is about as big as the ones
shown in the kalos anime, not very small like the ones seen in Kanto. Big types of wigglytuffs are nurses in kalos
rather than chansey/blissey/audinos(Yes I know a anime episode of audino is coming soon but I'm talking about
wigglytuffs that are most 'owned' in kalos). It's wigglytuff and part of the classic games and classic lolita fits just
well with this Pokemon(among with other pink outfits too).

For a while I have a problem placing where I should put this Pokemon in the category of lolitas. I know sweet would
be fitting too but then I finally found a solution. 'Candy' lolitas. And it is really perfect for this pokemon with candy.
'Aromatisse' and candies are usually have the sweet 'aroma' just like the name. While I know it's actually based off
of 'perfume' and another myth of this Pokemon is considered to be as. But I really had fun with the details and colors
with this Pokemon, truly I wanted to show the beauty too!

For the human-likeness Pokemon I wanted to thank my friends for letting me use their Pokemon as a example of
the types of Lolitas!

Oji Gallade, and the...only male of the of the group of lolitas(and one of types of lolitas that doesn't focus on dresses.
but rather more boyish part of the looks but still retaining the classic designs)But he got his girlfriend a Gardevoir wearing
a nice Shiro lolita. Shiro lolita is the white types of lolitas. These are the two same Pokemon that my friend commission
me! :D

Jynx, oh gosh. You may recognize the jynx who chased Apollo(mega blaziken) around! X3 Wearing a harajuku inspired
dress! I really had fun with the outfit and drawing Jynx too.

Finally Genevieve the Gothitelle wearing a gothic dress combined with the two gothic clothes that my friend chose for her
Pokemon.

I have no names for Wigglytuff, Aromatisse, and Jynx yet...so I'll have to think about with the names soon. ^ ^;