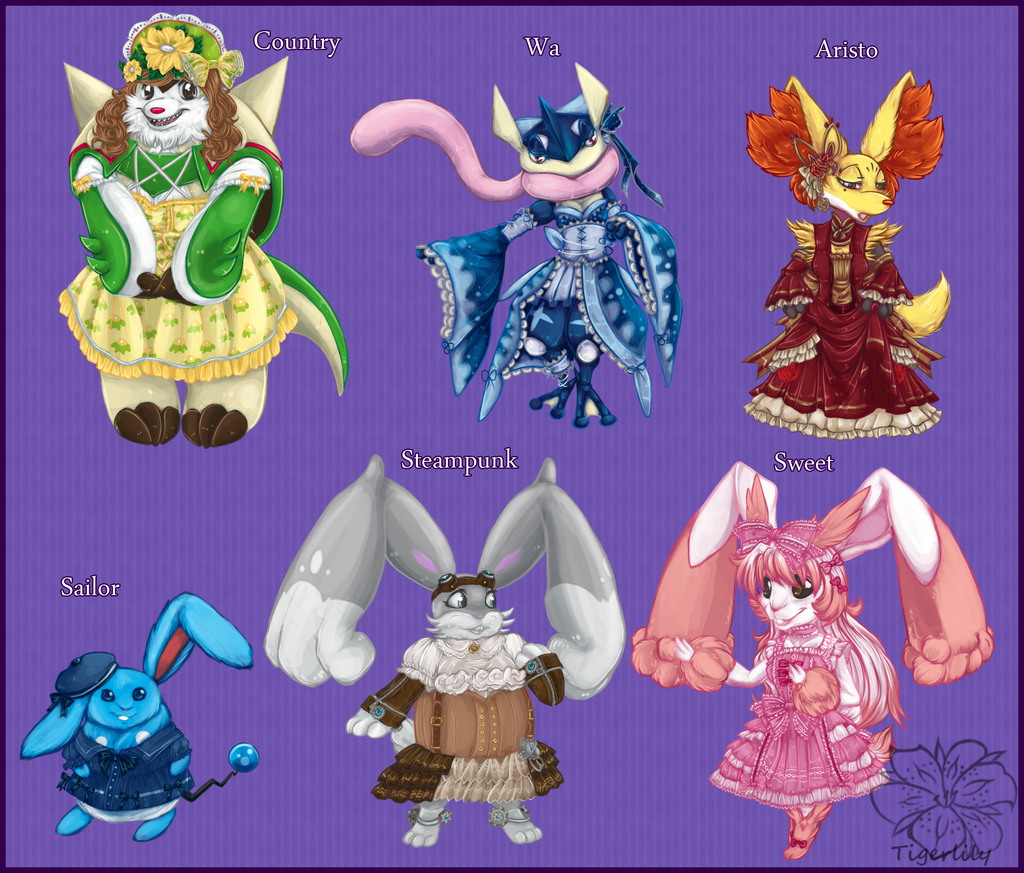 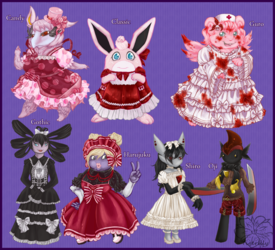 Set 1 of Pokemon theme, first the kalos starters Racheal the delphox is wearing Aristo,
Grenouillie the greninja is wearing wa, Green Tea is wearing Country. I'm pretty
sure your familiar with Racheal's bustle dress from my previous submittion. The bustle
dress is victorian and fits the Aristo style of lolitas too.

Grenouille is back once again with her usual bride kimono lolita style outfit. I really love
this outfit that I did back when I did for my best friend's birthday present. This time
a much more clearer of what her outfit looks like.

Green Tea, yes another chesnaught OC, she was originally named Anna but then I changed
her character(and name) and started to think she would be something out of the stereotype of other
chesnaughts. She loves wearing lolita outfits. :3 And she is more focused on contests rather
than battles. And the hair is actually a wig. xD She is the most difficult character out of the
6. Always do i have trouble drawing chestnaughts....and chesnaughts in general. Her outfit
may not be the most complicated like Linvar's sweet outfit. But the design of Chesnaught
is pretty hard, but I did get to managed to make the dress actually fit on Green Tea.

Yes here we have the bunny lolitas. Linvar is wearing sweet, I thought I would have end
up having two sweet type Pokemon wearing lolitas but eventually got around finding out
there's more lolitas that I haven't discovered other than sweet. Okay it's sweet or pinku
lolita here since she is wearing a pink lolita but the outfit is called sweet too. So either these
two fit Linvar very well. Of course, Linvar has the most complicated and detailed dresses of
the bunch.

Then we have the shiny diggersby Darcy wearing Steampunk, a style that I didn't know
that is considered 'lolita', but yes steampunk lolitas DO exists! :D I also thought the steampunk
style would fit diggersby very well! Especially with the color combination.

We also have Bubbles, one of my friend's Azumarill. Wearing a cute sailor lolita outfit~<3