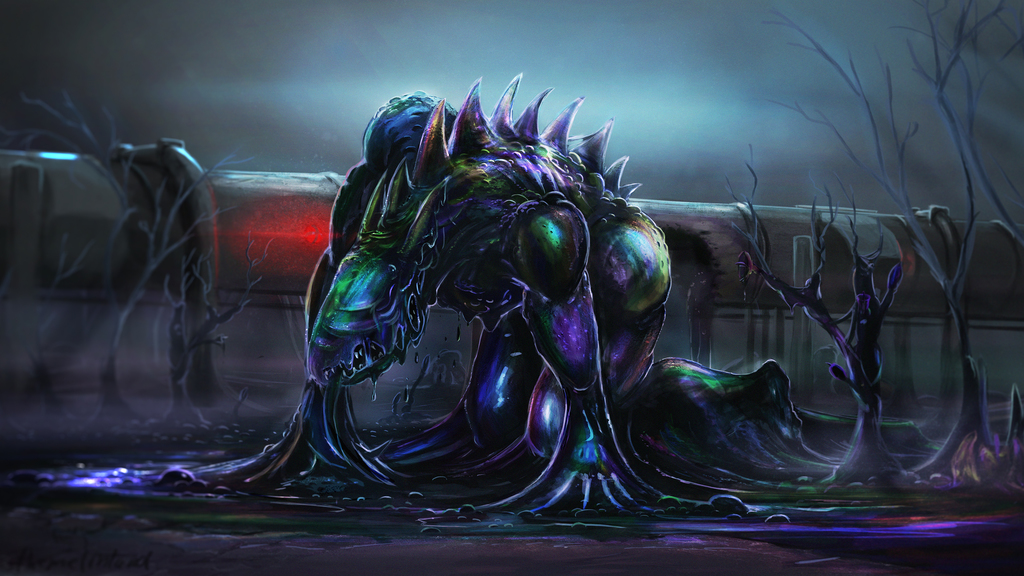 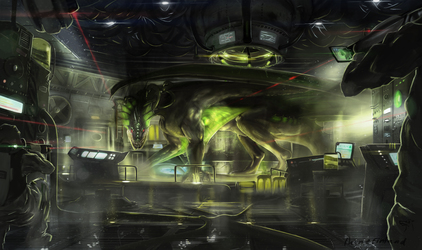 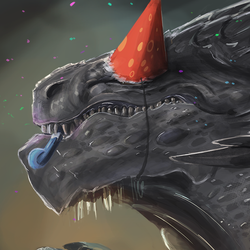 This was another thing I kinda felt like drawing during the wee hours of the night. somewhat inspired by the reflections that oil casts when mixed with water.

Alright, since some people were wondering, I sketched up a some sort of a background story to this:

Late during the night somewhere in the northern wilderness of Alaska an oil pipeline cuts the landscape in half. An engineer working for the oil company arrives on a jeep to the point where he had earlier today been noted that there was something wrong with a part of the pipe. The moon lights up the clearing around the pipeline as the engineer jumps out of his jeep, disgruntled that his nights sleep had been cut short. Sure enough after he inspects the part of the pipeline closer he notices a brown rusty spot on the side of it. He phones in on his co-worker at the control room thousands of miles away to cut off the oil flow in the pipe and to call a few repairmen to come and fix the rusted part of the pipe. Shutting his phone off after the conversation he opens up one of the panels with a screwdriver on the side of the pipeline to reveal a computer screen. He connects his PDA to the computer and enters his credentials after which he turns on the safety doors inside the pipe to prevent the remaining oil from splashing all over the place when the repairmen get on the scene.

Shortly after doing this he hears a silent but audible acid hissing sound coming from the pipe segment with the rusty spot. Shortly after which he sees some of the oil inside the pipe seeping out a small hole at the bottom which had just formed there. He takes out his phone as he walks towards the leakage to inspect it further while typing in the number of his coworker. As he comes near he notices that the rusty stain on the side had now become already much bigger, with a small crack at the bottom. Just as he is about to bring the phone to his ear the pipe segment bursts open, spraying him and the surrounding area with oil, knocking him on his back in the process. Very quickly he notices though that the oil is far more viscous from the norm as he tries to get up and away from the spraying hole in the pipe, but cannot as the oil is much more tar like with its viscous and sticky properties. As the pressure in the pipe begins to die down so does the spraying of the oily substance. He finds himself now lying on the ground covered in oil hardly being able to breathe. For a moment it felt like the substance was moving by its own accord but surely it was only due to his own movements. Not after long he feels a very strong burning sensation come over his entire body as he quickly loses consciousness from the shock.

As he lay there motionless and unconscious his body begins to dissipate into the oil, after awhile making it impossible to even know anyone was ever there. Everything was still for awhile until something stirred in the puddle of oil. What rose from there was far from human though. First you could see a large bubble rise from the oil, which would later become the torso of the newborn creature. smaller spheres began to form along its back which later would turn into spikes. Then the tar like oil would stop rising from the center and you could see the torso rise up as it was still gaining it's features. Then you could see the head of it whip out of the puddle of oil whilst letting out a deep gargled growl. Moving its head back and forth as if to look at itself as its features were still unclear. Then you could see the arms and legs, still stuck in the oil and slowly being formed as it steadfast continued to rise from the oil. Last came the tail of it, long and sleek. Finally it snapped its other arm out of the oil and shortly after followed with its other arm as well, throwing the oily substance all over the place in the process. After it's upper body was free its details had already began to shape up. Long and eyeless face with an oversized mouth, interior of which was filled with rows of sharp teeth. Short horns sprouting from the back of its head and followed with large spikes along its back. Hands which seemed to almost be missing fingers as the oily substance continued to flow downwards and off of its hands. The oily sheen still remained as its whole body seemed to be in an endless state of motion as the oily substance kept flowing on its body. Finally it managed to rip its legs out of the oil and shortly after the tail followed as well, trailing behind it.

The substance had also changed the nearby scenery to look more alien like, the trees and plants near the pipe had started sprouting foreign flowers and taking different forms. Dripping out of the flowers seemed to be the same oily substance that was inside the pipe. On the other side of the pipe a deer apparently had also been caught in the blast of the oil and was currently struggling in it. However after awhile a similar creature that had just risen from the oil had began to take shape at the spot where the deer was just a moment ago. You could see bubbles rising from the oil as the back of the creature came into view. However this time the creature had different features, making use of the bone structure of the consumed deer. The bipedal creature took a few steps after it had finally formed, its feet barely there as they would disappear each time it would take a step and leaving behind a small puddle of the oil.

Suddenly a beam of light came into view from around the corner on the road. The creatures then in a few short moments seemed to melt back into the large puddle of oil before the just arrived repairmen got to the scene. Amazed by the damage at the scene they got close to investigate the pipe, while completely not noticing the alien flora around the puddle of oil. However as both of the repairmen stepped into the oil they found their feet stuck to it, shortly after the confusion turned to terror as they both became to sink into the seemingly shallow puddle of oil. Shortly after nothing remained of them either. As one would expect, the oil began to bubble again, however this time four different creatures began to rise from the viscous oily substance. 3 of them had a more humanoid appearance, with 2 pseudo legs and arms and the remaining one seemed to have 4 legs. Three of them would travel out into the woods as a pack, leaving behind trails of the same oily substance that they are formed of, as one of them seemed to stay around the ruptured pipe. The one staid back went over to the PDA and smashed its hand into the control panel, causing it to short circuit and open the safety doors inside the pipe. This caused an excess of oil to come out of the hole in the pipe and cover the entirety of the field in oil. However it wasn't long until its intentions became more clear as all of the plantation that the oil touched became to transform into foreign flora. Oil kept on seeping out of the newly formed plants causing the oil to continuously spread further and further, catching more animals into it and transmuting them. It wasn't until days later when more people would show up to the scene and find out what had happened, but by then the area was already crowded with alien creatures and plants.