Born With Wings (Take 2) by tapewolf 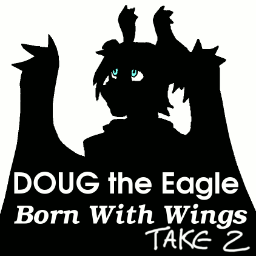 This is a new cut of my song, 'Born with Wings'. The original version had a synth bassline which I wasn't too happy with, so I muted that track and recorded a new line on electric bass. I also redid the organ so that it sits better in the mix, and did a new take of Cale, though I would still like to have a proper VA for that voice for the album version which I'm hoping to mix in January.

The other major change is the fadeout at the end, it was inspired by some feedback on the original take of the song.

The bass was an Epiphone Thunderbird Gothic, recorded direct through a TLAudio 5050 preamp. I still need more practice.

The mix seems to be a little hot in places, I'll have to be careful about that in the final version.

The earlier recording is here: http://www.furaffinity.net/view/8416255/

This is a song I put together from nothing over the course of the week. The first verse suddenly came to me while I was leaving work and brooding over the rather dark storyline currently running in DMFA, wherein a group of adventurers is running around decapitating apparently innocent incubi and succubi for no obvious reason.

So, what would it be like to have to run and hide for your whole life to avoid summary execution just because you happened to be born with wings? This song attempts to tackle that question.

The song gradually built up during the week, and was basically finalised last night, after I had this little melody come into my head when I was lying in bed at 3am last night.

Today has been spent polishing it up, recording it, performing the vocals, and finally mixing it. I think it turned out rather well, but there are some things which could be improved. I am rather pleased with the lyrics, this time... usually they're almost an afterthought :-/

Tracking was done to a TASCAM MSR-24 and a TSR-8 for the vocals. Mixing was done on a Soundcraft MFX20 to a Studer A807. The string synth was a Cheetah MS6 fed through an Electroharmonix Small Clone chorus pedal.

Things which I'm not sure about:

The piano intro. I was trying hard to make it sound less mechanical... now I'm concerned it sounds too amateur.

I thought the metronome sounded good, other people might not.

I need someone to play Cale for the final album version.

Yes, you were born with wings

And no-one's on your side

And now you have to hide

From all the spears and slings

'Cause you were born with wings

Yes, you are on the run

And if you stop you're dead

'cause they'll cut off your head

No matter what you've done

And so you're on the run

Just pretending that they're just some normal guy

We cannot let our neighbours see the incubus inside

Yes, for safety's sake we're forced to live a lie

Yes, they're afraid of you

Because the power you hold

Could let you steal their soul

Something you'd never do

They're still afraid of you

Yes, you can change your form

You have the power to hide

Protect the you inside

and shelter from the storm

'Cause you can change your form

So many eons past our kind were cruel, they were cruel

But wars have come, we paid our price and know that we were fools

"Don't get me wrong. I have no love for the lil' shifterthings. But this guy was harmless. Had a wife, two kids, no crime record. Bad Times." (*)

A school where you can go

They'll keep you safe from harm

They'll teach you what you are

And all you need to know

You only need to go