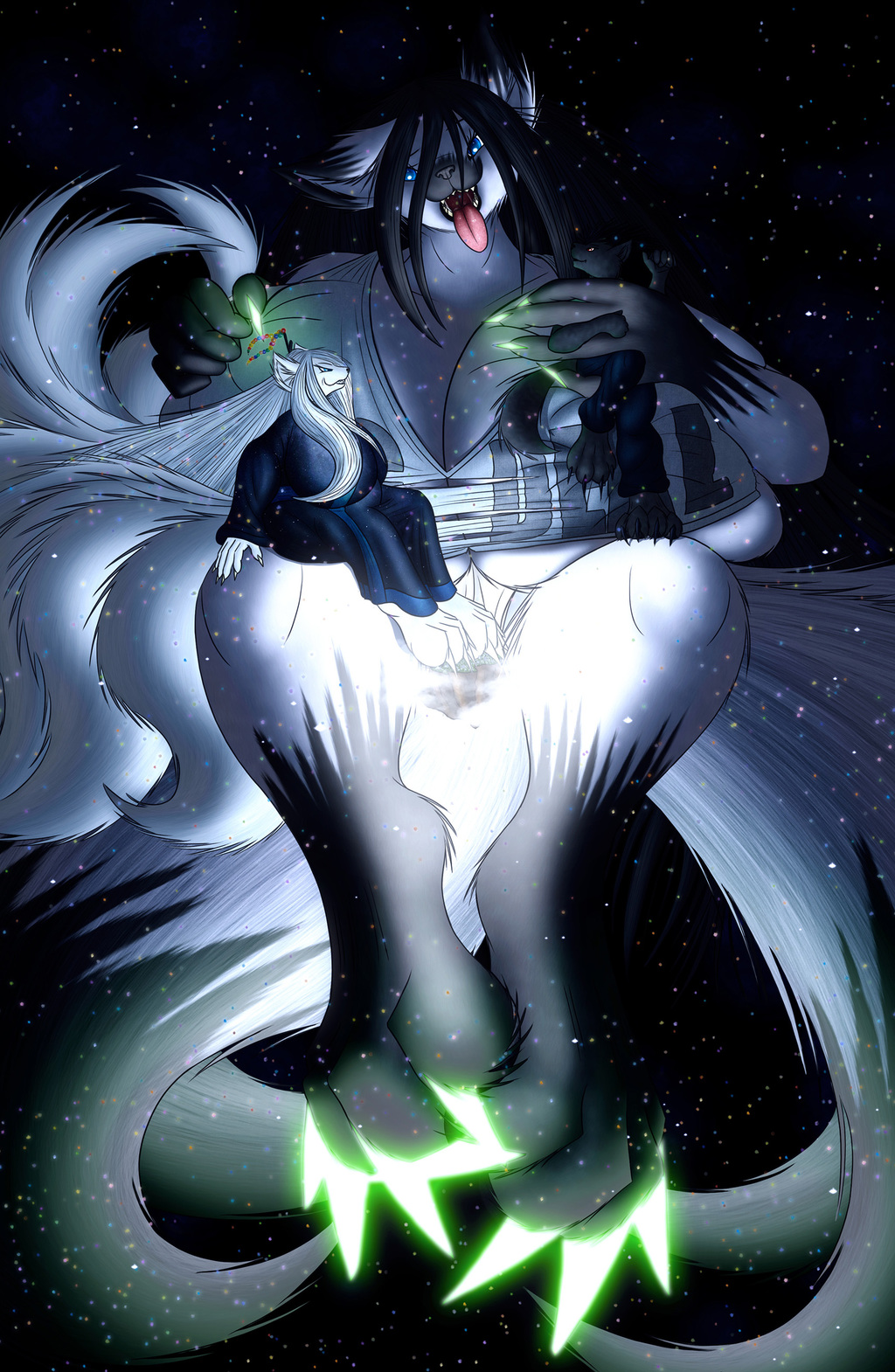 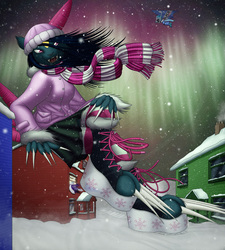 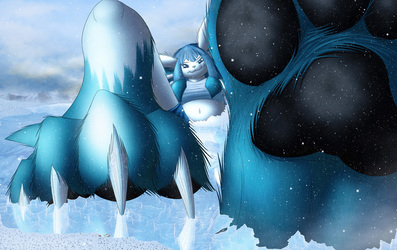 (Reposted from the FA rollback)

It had been a combination of arrogance and ignorance that had led to the decision to request that the Æsir bring their daughter Okamitsune along with them. To a significant extent, the request was well-justified; the Pharosa Pantheon was known as one of the single mightiest Pantheons across all existence, ranked very near to the Æsir, separated by only a dozen or so other Divine families in size and power. They had hosted many supreme deities before, and accommodated their mythical scale and strength with ease. Okamitsune Æsir was a name known far and wide among the highest echelons, but Pharosa had previously entertained both her parents quite comfortably, only needing to marginally expand a few doorways and chairs here and there. Those same parents did warn them that it would be entirely sufficient to simply not invite their hybrid child, but Pharosa felt confident and saw no reason to exclude such an impressive guest.

The reasons came to them, one by one, as they watched the young wolfox deity lower herself onto her hands and knees, begin to crawl through the central hall's largest entryway, pause, instantly enlarge the doorway thrice over, resume crawling inside, pause again, enlarge the entire building to three times its original size, squeeze her chest through the entrance with a groaning series of creaks and cracks and fwumpfs, squeeze her hips and rear and thighs through just as snugly, plant her thick paws down upon space that had been reserved for over a hundred separate guests, and finally rise up to a kneeling crouch that left her pert ears flattened against the distant ceiling.

Naturally, the hosts quickly pulled aside Okamitsune's far more modestly sized parents (both only standing a mere four heads and shoulders higher than any other deity present aside from their progeny). In hushed tones, they nervously inquired if she might not restrain her divine presence to some degree, given that her overflowing body filled a good quarter of the venue and her overflowing power was causing sweeping waves of growth spurts among the other guests. They were understandably concerned when they were informed that not only was Okamitsune already in a restrained avatar, but that it had taken hours of combined effort among the trio just to compress her down to this scale.

All together, it was understandable why several of the Pantheon's members found themselves unable to refrain from any overt reactions of awe or overwhelmed amazement, despite the Æsir's strident and firm warnings against such displays. An admirable number resisted, to be even more fair, but in the end one deity let out a gasp and another uttered an exclamation of nervous admiration, either of which alone would have been enough praise to break down Okamitsune's resistance. Combined, the Pharosa Pantheon didn't even have time to realize the gravity of their error before their most massive guest exploded out of the grand hall with a pleased growl.

... Mmmmph, o-okay, oof. Hoo jeez, that was intense. Obviously felt really really [u]good[/u], but also intense. Breath coming in ragged gasps, toes curling and uncurling in rhythmic squeezes, Sunny let her shoulders slump and her eyes open and her fists unclench. Still, I think I managed to hold it all in! With how nonsensically pressurized I've gotten, I bet I didn't even double in size- oh. Uh... Oops?

Sunny grit her teeth as she felt the entire Pharosan divine realm settle underneath her rear and thighs. Struggling to balance atop the plate-sized landmass was an ongoing effort, complicated by non-stop tremors and afterripples of lingering growth expanding her frame larger still.

Umm... Heh heh, S-Sorry about that! Did my parents warn you about not complimenting or admiring me? Because, uh, yeah, I've sorta been at my breaking point here. I know it's hard not to enjoy the view, but at this point if someone so much as tosses me a "thank you" I'm pretty sure I'm gonna have a growth spurt!

Indeed. And, I assure you all, the increase my daughter just experienced is nothing remotely close to a growth spurt for her. Without fanfare or show, Fenris and Inari appeared upon Okamitsune's thighs, both larger than Pharosa's extents. We did warn you, multiple times.

Mom! Dad! Oh, hey! Sunny weakly chuckled, grinning down uncertainly at her parents as a poorly-timed burst of bigness shoved her breasts out to fill more of her lap and bump into both elder canines. I uh... I... I know you're both reeeeeeally upset with me right now, but-

Actually, dear daughter, we are not upset at all. Inari casually made herself comfortable, sitting down on her meager stretch of wolfox thigh like a couch and letting her own excessive bust smish against Okamitsune's. Her massive white paws loomed directly above the great hall, eclipsing it and its surroundings. Our hosts were well-warned of the dangers of requesting your attendance, and of admiring you. In fact, in light of all considerations... Inari's eyes flickered momentarily as she shifted power flows and enacted divine seals. We are both very proud of your literally unprecedented display of self control, and honored by your magnificent show of restraint!

Okamitsune shivered with raw pleasure, feeling the praise flow through her body in an unfathomable explosion of wondrous excess. Inari and Fenris' mighty assistance alone kept Sunny's body from enlarging, and even with the White Kitsune Mother and Black Wolf Father's unparalleled power holding her stable, she still glowed with an aura of divinity visible from the Æsir's home cosmi. MmmMMM! G-Geez! [3 G-Glad you approve!

Yes, but, remember- we approve of your restraint, rather than your excess. We are proud of you because you held such power and growth back, instead of indulging in it as is your norm.

MMPH! The wolfox's body tensed rigid, needing several seconds to settle down from the pleasure high of praise. I-I... You... R-Right! Oh [u]man,[/u] that felt so good... I m-mean, right! I appreciate it! It's not easy staying this cramped. It just feels so much more natural to grow, and expand, and fill, and-

Right! Sorry! Okamitsune smiled as she wrapped a set of slender fingers around her father's broad torso and (one of) her mother's thick tails, hugging them gently against herself. Both sank into her plush chest, embraced by the warmth and weight of her fullness. So, uh, what now? I can probably stay this small with your help, but even the three of us combined probably aren't gonna get this avatar body any less huge! What about the party?

What ABOUT the party, hm? Inari chuckled, tilting her legs down so that her tremendous toes hovered inches above the highest towers of the Pantheon. They were warned that inviting you would inevitably result in growth and silliness. I imagine the party shall surely continue. It shall simply have a new center of attention.

Ooh, works for me! Although this does mean I'm gonna have to ask for an extra-big serving of ambrosi-

A commission for VDO of Okamitsune and her parents doing what they do best: Being really, really, really really big. The Æsir family are always an absolute delight to draw, Okamitsune is extremely silly, and her parents, while significantly more "down to earth" than their daughter, are a huge pile of fun too. That poor Pantheon is in for some interesting views though!