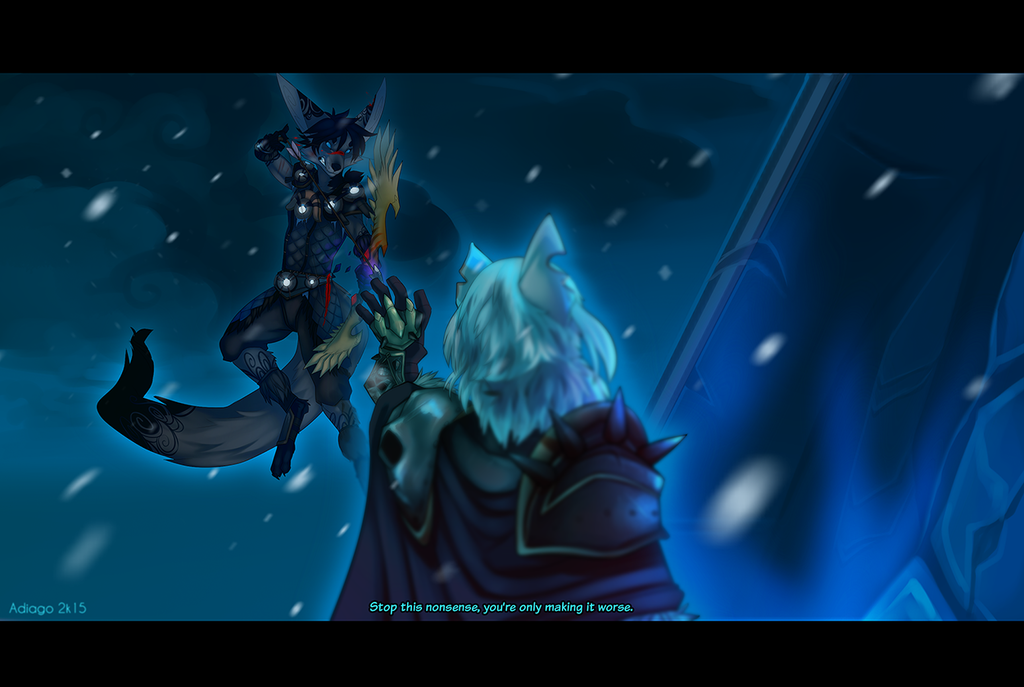 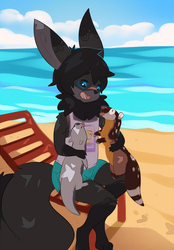 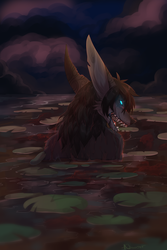 The group of warriors had tried to do the impossible. Fly directly to the frozen throne? Unheard of! Yet, here they were, a small group of adventurers, hardened from their training set out on wings and wind to the end of the world. The theory was, if a small group could take out Arthas before he built up his army of deathknights, they could stop this war before it started.

And there they met little resistance as they strode up to the Lich King himself and demanded his surrender. And how deep his laugh, sending shivers down their spines.

"This makes finding new bodies for my army much easier," he exclaimed with open arms raised to the group. What Halcyon and Elysia didn't know, was that would be the last day they'd be together.

For a force darker than jealousy and more powerful than the strongest magic was at play here. Betrayal. A deal signed in blood, for the other two in the party had sold their team mates souls for riches. The husky and doe that had spent so many months traveling with Halcyon and Elysia had seen those fliers. The blood soaked papers that promised wealth in exchange for selling bodies to the Lich King. Most who saw them found them unbearable, disgusted, horrified, yet there was always someone willing to sell out their fellow man.

The deal in this case, for a healthy able bodied demon fox, and a strong paladin tigress. Unknowingly, Halcyon and Elysia had stepped into a trap months in the making, and they weren't aware of the depth of the betrayal until their tank and healer mounted up, with a smile to the remaining two before flying off. By that time Elysia was swarming with death knights and Halcyon had engaged in one on one combat with the Lich King himself.

Injured, weak, feeling the icy grip of death nipping at the back of her neck, Halcyon bid for one last attack against the King whom had so easily cut through her scale armor. As she drew her final black arrow and leapt at Arthas, she heard Elysia's screams, far away, muffled.

Everything slowed down then, snowflakes even hovered mid-air as Arthas raised a massive gloved hand. "Stop this nonsense, you're only making it worse, I need the bodies whole" he said in his deep, growly voice, and their eyes connected in that moment; Halcyon's fierce determined dark blues met his icy, overpowering gaze. In an instant he'd grabbed her throat as time sped back up accordingly and struggling to breathe Hal's eyes frantically searched for her bolt. There it was, buried in his chest between the plates. She'd done it.

Thrown like a rag-doll to her knees Hal could only lift her head to watch as the blow from Frostmourne took the last of her life; slicing through her shoulder armor and mail tunic like butter, and as she fell on the icy grounds, she thought she could hear the muffled screams and sobs of Ely as she was dragged off by paladins from Dalaran.

Through the pain, she heard a voice in her mind, and as Halcyon faded from the world of the living it said "Your soul is now mine." And unfortunately for Halcyon, the heart she should have hit, no longer existed within that chest.

Arthas pulled the arrow from his chest and knelt down at the corpse of the vixen, unaware yet of its gender, only thinking that he was a good warrior and would serve well as a mindless slave. He'd motion for someone to bring a board, carry the body to his chambers. This one he'd turn into a knight himself.

And there we have it, how Hal became a death knight~
mature for gross bloody gashes!