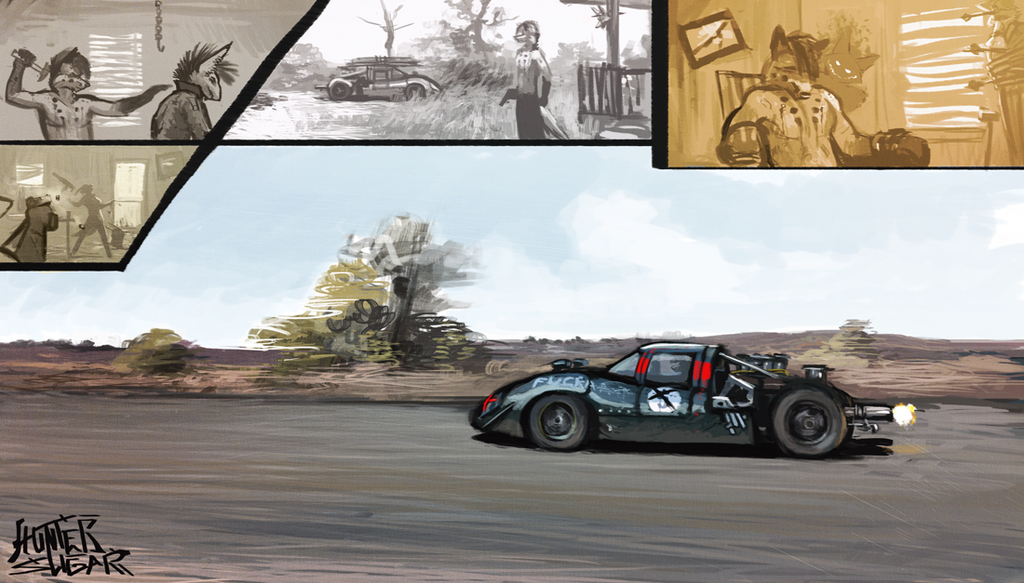 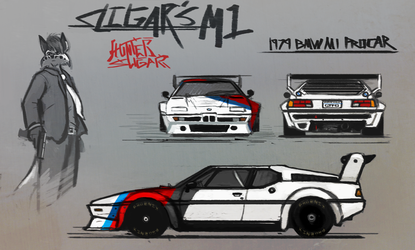 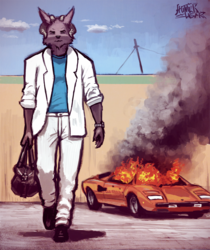 Ehru: "How does that story go again, with that whole thing about you being captured."

Sligar: "being over the border, out there?"

Sligar: "well, The person I was after before that ordeal was just a whole shit load of surprises, then again he wasn't even a typical anthro and used his magical voodoo shit on me and I was out cold. Turns out the dude was fucking daemon."

Ehur: "Man, Roos should have done her research before shuttling you off on that bounty."

Sligar: "yeah, it was lots of fun. Anyways, I find myself waking up with the taste of blood in my mouth, muggy ass heat all around me. These motherfuckers that had me used at least two damn rolls of black duct tape to stick me to a chair. It was all around my arms and ankles. I hadn't notice yet until I shuffled a bit that one of these fuckers thought it was a fun idea to drive a couple of nails in my chest! I mean what the fuck! right?"

"Now, I'm looking around the room noticing pretty much where I'm at, savage country my friend, being a damn milk carton kid. First thing I spot is this dead chick in an old wheelchair across from me with her eyes missing and all sorts of not pretty, and then this dude hanging out on the wall next me with arrows in him. At this point whats popping up in my head is getting the fuck outta here. I'm sitting there struggling with the tape and its no good, I have no idea where these guys got all this damn tape but I'm glad they didn't just use nails to hold me in that chair, and, Alright so we all know fucking Dubmare is a devious little bitch-

Sligar:"…well, she, decides to show her face scoot'n up next me goin "…hey there, like some help?" No bitch i'm just chilling here with tape wrapped all around, of course I want some help! jesus! she had this jack-o-lantern smug-ass face going on at the time, I don't know, but she cut me loose. and when I got up the first thing I did was pry those damn nails out of pecs, shit burned like a motherfucker."

"so, whoever was living in the shit hole had some tunes blasting in the next room, I eye'd this table full of goodies, like axes and what not, at least goodies for me, no so much for the people they were used on. I grabbed a hammer from this table and made my way over to the door way where I can spot this ratchet-ass dude playing with a power drill making sure it works or something at a table, im sure the same one he used on that chick that was across from me, still had blood on it anyways, and ok, this was good, crept up right behind him right behind him right? and BAM! busted the motherfuckers skull wide open! then gave him some more little love taps to make sure he wasn't twitch'n anymore. I find a G20 on this guy with an extra magazine, very useful. I jack him of his shoes also because I'm not going to keep walking around barefoot in this damn house, dude had nine-and-a-halfs too, perfect fit."

"So ease'n up to the front of the house, I don't notice any other captives still alive, just rotten wood and shit you'd find in my grandmas house, the busted old lamps, But I do spot, I guess the dude I just murdered's love interest, this lizard hoe sitting at the dinning table by the front door reading some shit magazine and packing a Mac 10. Well she happen to turn her head at the same fucking time I start to draw that dudes Glock, she moved so fast for that machine pistol and flung that chair she was sitt'n in like across the room, but I already had that Glock ready and capped her ass with at least 6 rounds before she hit the floor.

"after that I just made way out the door into the blazing humid heat and was greeted with the sound of buzzing insects and the sun raining its early noon light on me. Looked over to my right and spotted, a pretty trashed, Lola T70, it was missing its engine cover and shit, but it was my ticket out. Homie had some boards bungie corded to the roof for some reason, guess he was gonna make a club house or some shit, but I ripped that crap off and flipped up that door and hopped into that extremely hot ass interior, steering wheel was on fire, flipped the necessary switches, held that ignition button and it fired up, thing was so loud couldn't hear anything but a rumbling V8.

"Now I didn't know how far I needed to go, or how long that Lola would hold out, even with a basically full tank, but I think it was a lot better then hanging out and conversing with the decapitated heads on the porch, and just to have some more bros show up want'n to start up a tea party with guns. so, I booked it with the lola and cranked it up to 150 and just bulleted my way up the nearest Furryvile checkpoint, and, well that was a WHOLE other story trying to get shit straighten out that I wasn't a bandit or savage of any kind. whole thing was just a mess, man.

Ehru:"…..and now we have to sit around and watch over a Furryvile checkpoint all day today, just because something big is suppose to be happening, so Roos said."

Ehru "….yep, I wish she would stop being so damn cryptic."

TLTR: Sligar kills some mofo savages and steals their car in an escape.

BTW I wish I wasn't so lazy so I could make comics of my world.