The Wager by SlateFang (critique requested) 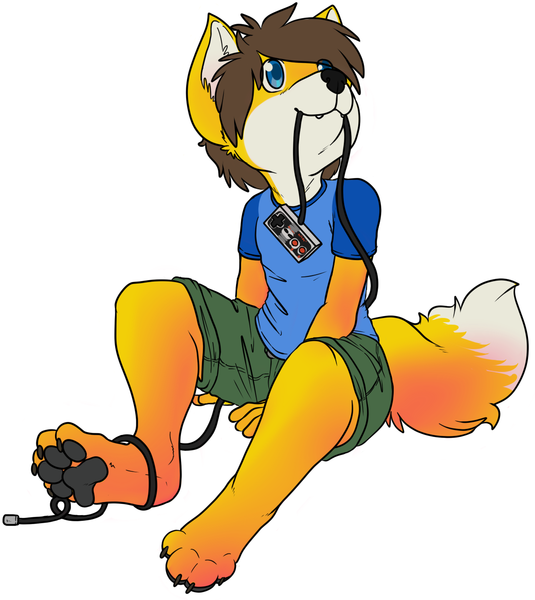 Vortex the bear-fox hybrid was lounging in his room on a sunny May day, when he heard a knock at the door, interrupting his nap.

"Gah-whu-?!" He stuttered, falling off his bed and scrambling to turn off his stereo, which was playing some Japanese game soundtrack. The knocking persisted, and the bear-fox grumbled as he pulled on his DC shoes. "I'm coming, I'm coming! Please!" He dashed down the stairs and opened his front door to find his little brother, Goldie, a yellow-furred fox with blue eyes, with a large duffle bag on his back.

"HI BIG BRO!" He yipped as he jumped onto Vortex, trapping him in a bear hug.

"S-sorry!" The fox pup looked down with a slight blush on his face. "It's just...I'm so excited!"

Goldie's response was to unzip the large blue duffle bag and pull out an old SNES with several game cartridges. "My games came in the mail!" Goldie beamed adorably. Vortex titled his head and flicked his pierced ear in perplexion.

"No, silly! These ARE the games! MegaMan, Mario, Street Fighter..." Goldie listed off his impressive repetoire of games as Vortex sighed slightly. "Hmm? What's wrong?"

"Your enthusiasm for antiques is quite unnerving." Vortex replied matter-of-factly, causing his cute fox bro to feign a pout and fold his arms.

"You're no fun! Your games aren't as awesome as these!"

"-And Tekken copied from Street Fighter!"

"So yeah, wanna play some Mario?"

"It actually has two player?" Goldie nodded and produced a second controller from the bag, which Vortex took in one white-furred handpaw and examined thoroughly.

"Uhm...were ergonomics actually invented back then?" He pondered with a chuckle.

"Yeah, I guess so? No, seriously bro, it's been weeks, LET'S-A GO!" Goldie yipped before hopping past Vortex and setting up the console in his living room, kicking off his sneakers, exposing red-and-white socks. "You mind, bro?" Vortex shook his head. He loved Goldie's paws, but the problem was, he couldn't tell him outright, he was too shy. The bear-fox took Goldie's sneakers and put them in the hall closet, alog with the bear-fox's mildly impressive footwear collection. He walked back into the living room, where the game had already booted up, and a controller was thrust into his hand. "Mew!" Goldie chimed adorably, leaving Vortex with nothing to respond with except,

"Awwwww...So cute!" Goldie beamed his cutesy smile and clicked some buttons. Soon, Mario and Luigi were on the screen, waiting to collect coins in an underground complex in what was the original Mario Bros. game.

"Can we make this interesting bro?" Before Vortex could respond, Goldie added, "Loser gets tickled!" The bear-fox knew about his younger sibling's love...no, adoration, for tickling, so simply nodded. He somehow knew he was going to win.

Both brothers took their controllers and started pounding away at the buttons, making the red and green figures hop around, killing Goombas and collecting coins. Mario, played by Goldie, had a clear lead, but Vortex was a quick learner, causing Luigi to soon catch up.

'Oh my...looks like Goldie's playing to win! Well, this bear-fox's sneaks are staying put today!' Vortex thought as he looked at the immense concentration on Goldie's muzzle, his socked toes wiggling as he played. The older brother was briefly distracted, but he continued on with a ten coin loss from Goldie. '20 seconds...'Vortex started to panic now, he pounded furiously on the unfortunate A button, and managed to recover part of the lead Goldie had gained on him.

FInally, with ten seconds to go, Goldie yawned loudly and let Mario stay still, causing Luigi to win with a three coin lead. Vortex frowned, then paraphrased one of his favourite videogame characters to exact his revenge on Goldie for laughing at his modern games earlier;

"That didn't satisfy me at all. I refuse to tickle you." He quipped with a huge grin on his face. Goldie simply pouted.

'Awwww, heck, the puppy eyes. Since when have I been able to resist that...?' "Alriiiiiiiight." Vortex relented. "But for being such a spoilsport, I'm gonna have to tie you up first.

'YAAAAAAAY! It worked! Heheh!' Goldie thought as he felt his arms and legs being tied together in a loose hogtie.

"Can you believe deviantArt taught me how to do this?" Vortex chuckled as he admired his (albeit rusty) handywork. Goldie was on the sofa, on his furry belly, with his paws up, soles pointed towards the ceiling. He peeled off Goldie's socks and gently wrapped one around his muzzle, leaving the younger sibling unable to speak. "I know you don't like it too much, Goldie, but it wasn't much of a wager if it benefits you more than me to lose." Goldie nodded, resigned to that fact, and silently thanked the bear-fox for the tickling he was about to endure. Vortex simply sat on the arm of the green sofa, leaving Goldie to wonder what was going to happen.

Vortex grinned happily as his short-ish tail swept across the captive paws, causing Goldie to burst out in muffled laughter. "Like that, my sweet, lil' bro?" Vortex teased. Goldie nodded and squealed with laughter, his toes wiggling and curling, the black pawpads enduring the worst of the torture.

Eventually, it got so much, that the younger bro's improvised gag fell loose, allowing Vortex the pleasure of listening to his wild, screaming laughter.

"Hmm? You hear something, Golds?" Vortex briefly distracted his attention from the book he was reading, to look at Goldie, who had tears of laughter in his sweet blue eyes from 20 minutes of unbearable torture. "Yeah, that's what you get when you aske for tickles from a bear-fox." Vortex grinned and shut the laptop, untying Goldie and hugging him tight. "Love you, lil' bro." He cooed in a sing-song voice before giving his brother a small kiss on the cheek, which Goldie reciprocated.

"Don't start that! Else you'll get more tickles!"

"Okies, I DO love you more!" Goldie grinned, and the bear-fox chuckled heartily.

"So cute!" They hugged and gathered Goldie's things, ready to go back home.

"Bye bye, big bro! Thanks for letting me stay!"

"Thank you for interrupting my nap!" Vortex chuckled with a wink, leaving Goldie to giggle cutely as well.

After Goldie went home, Vortex kicked off his DCs, and laid back on his bed to listen to some music, and soon drifted off into a cheerful sleep.

This is :iconGoldiemegafan1987:'s long-awaited request, "The Wager". I wanted to publish it at the same time as my other requests, but he really wanted to see it. Hope you like it bro <3

COVER ARTWORK BELONGS TO :iconpanda-chan:, WHO MADE IT, AND GOLDIE, WHO REQUESTED IT. HE HAS GIVEN ME FULL PERMISSION TO USE IT AS COVER ARTWORK.