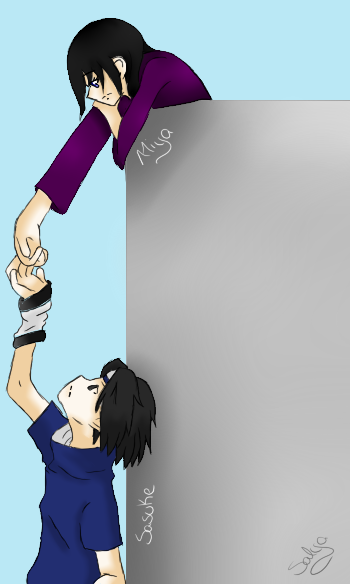 First thing.... I used a base for lines... I redraw Sasuke in my style... But whatever. I don't own the base that I used.

Story time:
Miya looked down with a frown on her face. Her hand hanged down as she didn't know why her mood was down. She closed her eyes for a for minutes, until she felt someone touched her hand. She opened her eyes only to see her crush under her, reaching up and just slightly touching her hand. "Sasuke..."
"Miya.. what is wrong?" He asked her.
"I..don't know... Maybe...I miss Angel..." She replied. Angel was her twin sister was moved away into the sand village to be near her love aka Gaara, leaving her twin alone in the leaf village.

...Why can't I do Naruto fanfics? I don't know... My ideas for Naru fanfics are AUs... But whatever. I don't even know if I can even write any naru fanfics.

And yes, I don't like saying Naruto, so I say Naru a lot. XD I can't say Sasu but I can spell it. lol