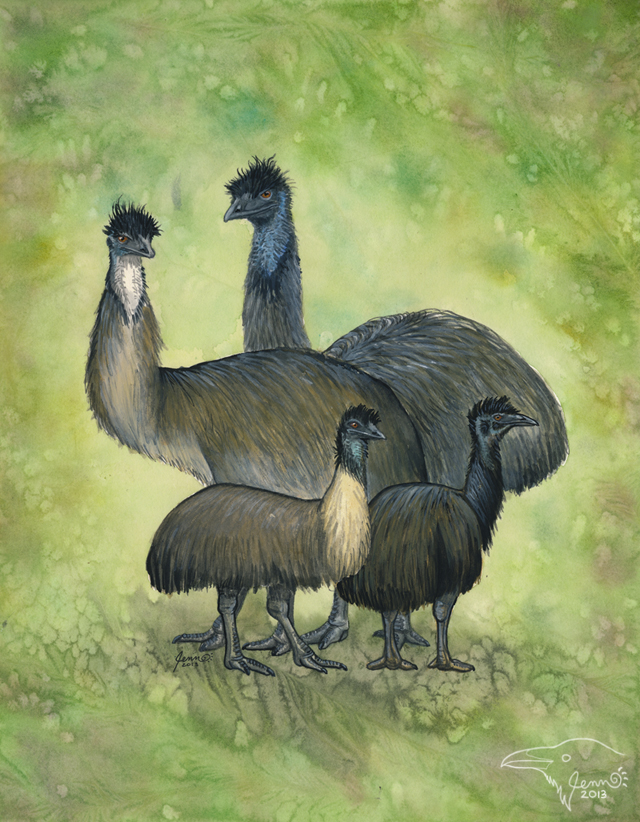 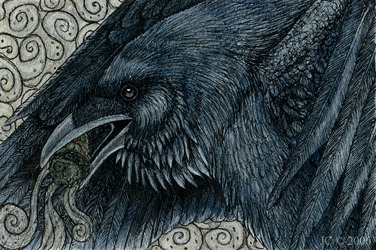 Illustration of four emus, clockwise starting with the upper left head: extinct Tasmanian Emu (Dromaius novaehollandiae diemenensis), the extant Common Emu (D. n. novaehollandiae), extinct Kangaroo Island Emu (D. baudinanus), and extinct King Island Emu (D. n. ater). The extinct emus all have speculative colors and features based on sparing writings and illustrations of preserved skins and of the animals before they went extinct in the early to mid 19th century. However illustrations of the King and Kangaroo Island emus do not have confirmed identities and to which species they each belong is unclear. This illustration portrays the animals to the best of the artist's ability, given the information found. Illustration by Jennifer Campbell-Smith, all rights reserved.

I was commissioned to do a painting for my good friend Todd Green's article in Emus Today & Tomorrow (a magazine for the emu farming industry). Todd's article is on extinct emus. (Here is a photo of Todd featured on the cover of a previous issue of the magazine for an incredible skeleton he articulated...Todd loves ratites!)

The trickiest thing about this illustration is figuring out what these emus looked like. The standard extant emu (Dromaius novaehollandiae novaehollandiae) was easy as I have a ton of my own reference photos from assisting Todd with his research. The Tasmanian emu subspecies (Dromaius novaehollandiae diemenensis) was also not too bad as there are pretty good written descriptions of them and a reasonably reliable illustration of one done by a 19th century illustrator. However, the King Island emu subspecies (Dromaius novaehollandiae ater), and the separate emu species (determined separate only very recently using genetic data), the Kangaroo Island emu (Dromaius baudinanus) were a lot more difficult and quite a bit more speculative. You can do a Wikipedia or Google search and come up with images right away, but it's not that easy in reality. The illustrations of the two, both dwarfs only standing about 3ft (~1m) tall as adults are not exactly labelled accurately, especially with the emus undergoing taxonomic renaming since the illustrations were created. To complicate things further, the two emus, despite being difference species, are so similar that the specimens collected by 19th century explorers were mixed up on the way back to Europe. So, the illustrations, one done from live animals and one done from a skin (post-extinction) may not even be properly labelled by the illustrators. Additionally, Victorian/turn-of-the-century taxidermy was not exactly something amazing and could skew the physical features of the animals. Not to mention taking the illustrators' style in to account.

So, what I did for this painting was take in to account the three illustrations of the extinct emus and written descriptions of the animals to recreate them. Accounts of the live animals place the Tasmanian emu about the same size, maybe slightly smaller, than the modern emu, and lighter in color with a white throat. The King Island and Kangaroo Island emus were both island dwarfs and I can assume, since their remains were confused and mixed up, that they stood about the same height. The King Island is hailed as the smallest emu though, so I made it slightly smaller. One article discussing the genetics of the King Island emu confidently used this illustration for the article, so I chose the King Island's colors based on that illustration and made the darker coloration the Kangaroo Island emu. It makes more sense to me that the separate species, versus subspecies, would have the most different coloration and slightly different head and neck feather densities.

I took a bunch of progress shots while working on this, so I wrote a blog entry on the process of this painting, if you are interested: http://ravendroppings.tumblr.com/post/44848352563/extinct-emus