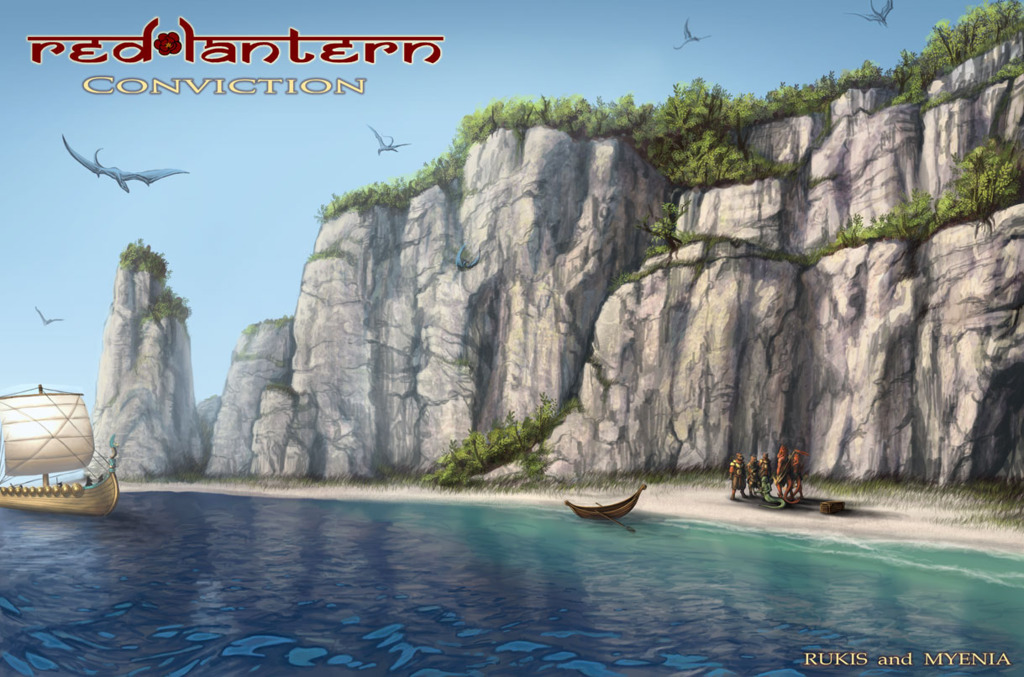 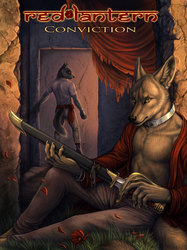 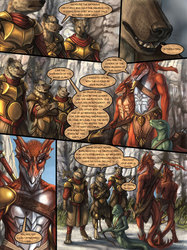 Red Lantern - Conviction is a comic by rukis and myenia, which will be posted over the course of 2012-2013. Pages will update on Mondays, from this point on.

This page was quite the challenge! Breaking down the workflow completely would be a little complicated, but basically, Myenia did everything from the shoreline down, and I did everything from the shoreline up. Oh, and she totally did that badass boat. I did the little weeny one :P Those mountains were a lotta time, but I think we got the imposing look we were going for!

On the island of Shanivaar, one thing is paramount above all other laws. Absolute political neutrality. The local Hyena clans do not like foreign wars spilling into their ports, or being fought on their land. But when a clandestine arrangement is made between the Matriarch of the Immar clan and the leader of the Cathazra force, a terrifying cold-blooded people who seem to have come to the island with the sole purpose of destroying the Amurescan fleet, the Hyenas' desire for lucrative trade might endanger the lives of the indentured servants they regard as 'property'.

At the Crimson Divine, Amon must come to terms with the prospect of being sold out of brothel life, and taken away from everything and everyone he knows to a future with mysterious new owners. Dhaval is attempting to stand on his own two feet and make his place in the brothel, but a new client has him terrified, and with Amon occupied with his own demons, the tiger will find help from the most unlikely and unlikeable of women.

As tension mounts amongst the Amurescan force, their stalemate with the Cathazra a dark cloud over every sailors' head, their Admiral fights an inner war against an agonized conscience. Even his usually pleasant visits to his jackal companion in the red lantern district have begun to take a dangerous turn, as both men fight two very different battles. Can they somehow be of aid to one another, or like the foreign fleets on the island, are they merely circling towards a clash?

War, like people's hearts, is never black and white. There are two sides to every story.

This comic is rated R, for graphic violence, adult language, and adult situations. We'll be releasing all plot-relevant pages online, absolutely free, but all graphic adult content will be withheld for the printed release.

The artwork in this comic is a combined effort of Rukis and Myenia, with both artists splitting background/character work. This comic is a labor of love. If you're going to post these images anywhere online, please have the courtesy to link them back to both artists. Thank you!