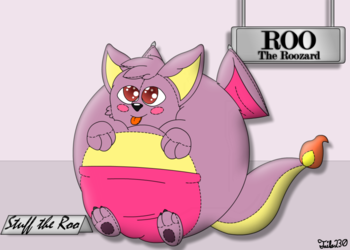 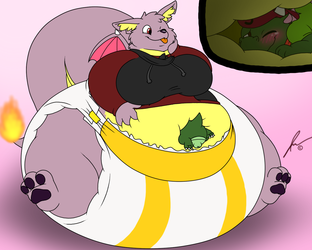 An amazing sequence drawn a*Looooooooooooooooooooong* time ago by my dear friend Geckomania that I commissioned a good year or so ago. More parts were planned but we decided that it would've been a bit much, so this's the wonderful outcome, I hope you all enjoy it as much as I do~

Some weeks earlier after a long, fun night together, Roo and Drake had found themselves to be somewhat more plump, and heavy than their usual chubby selves. As time passed the two had found they'd managed to make one another rather heavily pregnant, their bellies bloating, distending, and tightening with each passing day.

Part One; "Hey there fatty, you're lookin' good today ya rotund fluffbutt." Roo teasingly said, being more than comfortable with his size, having been pregnant several times prior. "Sh-Shut up, you round blimp, I'm not used to this y-yet." Drake shakily spoke, feeling over his tight, distended paunch, tugging down on his shirt in a futile attempt to cover over his humongous, hefty girth.

Part Two; "I-Is it usual to be this hot when you're so big? It feels like I'm standing in a fluffing furnace!" Drake asked, awkwardly attempting to remove his jacket, his absurdly distended stomach sticking out into the air, waving around as he wriggled and whined. His cheeks blushing furiously as he was helpless to even do something as simple as unclothe himself due to his extremely gravid middle. Roo reached down to his bloated middle and gave it a loving rub, being absolutely elated at his swelling size as he ran his plump digits over his drum-taut hide. "You bet your fluffy buns it is, you've got all kinds a 'lil joeys 'n kitties in your tum, ya cutie butt, of course they're gonna make ya a bit hot 'n junk. Especially when you've got 'lil roozard joeys in there."

Part Three; "R-Rooooo.. I can't even stand anymore.. How long has it been now?" Drake exhaustively inquired, panting as he tried to lean forwards, his still steadily swelling stomach denying him any forward movement. "Four months now, five to go!" Roo eagerly said, squeezing the sides of his colossal gut softly, moaning and nuzzling into his taut hoodie between his swelling breasts, panting and delighting in every second of the blissful, taut feelings of his tummy.

Part Four; "Roo.. I'm totally gonna pop. I'm.. gonna.. b-burst, aren't I..?" Drake worryingly asked, rubbing over his sore, stretched, and ballooned belly beneath his breast, lifting his plump bosom with his paws in disbelief before trying to peer over his tremendous middle, unable to see anything past the tan, creaking fluffs. "N-Nah, not just yet you're not hun, give it another three months." Roo cheerfully replied, drunk with the pleasurable stretching of his belly, which was now easily bigger than Drake in his entirety, as well as himself! Roo felt a kick in his middle, causing him to myew and blush heavily as he rubbed over his breast and belly.

Part Five; After several more weeks, Roo and Drake simply could do little other than eat, drink, and sleep due to their immensely swollen bodies, their bellies having overtaken the rest of them by several times each, while their breasts blocked their vision, too big to do anything but enjoy one another's company as well as their still rapidly swelling, and increasingly more active bellies. They asked their beloved friend Kylie to come over and spend the following weeks with them to help out with everything, unbeknownst to them however, their little fluffy friend was also rather preggers, herself! "K-Kylie, why didn't you tell us!?" Roo excitedly asked, looking over to Kylie who stood by his side, reaching over to tenderly rub her rounded beachball of a belly, purring loudly at the sight of her blush due to the sensitive, delightful feeling of the rubs. "Well, in comparison to you it's not much, but I'm glad to help out where I can for you two." Kylie waddled over between the hips of the two colossal, gravid blimps that used to be Roo and Drake, gently rubbing their tight, creaking, groaning, ballooned hide with her paws, feeling the unbelievable fullness of their bellies as kittens and joeys kicked and pushed playfully this way and that. Causing the two to moan, purr, and whine. "Sh-Shouldn't be t-too much longer now.." Roo said through his panting breaths, Drake absolutely speechless, knowing that he actually was in fact going to burst from his growth before long.

"We should probably get some rest, you two look exhausted, and getting over here like this has worn me out, too." Kylie said tiredly, rubbing the underside of Roo's distended paunch with both of her paws, scritching and rubbing those stretched fluffs. "F-Feel free to hop on up on my tummy, we broke our beds quite a while ago, but it should be warm and comfy up there for ya." Roo blushed brightly as he offered, promptly feeling a fennec gently scale the side of that mountainous belly, making Roo myew, and bite his lower lip at the pressure to his already heavy, ballooned belly. "Y-You sure down there? You're like a big balloon!" Kylie asked, peering over the cliff of Roo's belly, her paws squishing deeply into his plump, doughy breasts. Roo nodded and smiled, blushing bright the whole time before Kylie smiled back, getting comfortable on that taut dome before placing her head on those pillowy breasts, letting out a sigh as the three tried to get some sleep for the coming days.

Picture Drawn by Geckomania.
Kylie Fennec belongs to Geckomania.
Roo and Drake belong to me.
Story written by me.