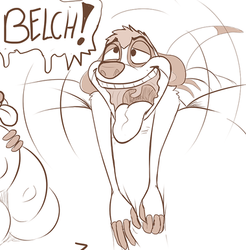 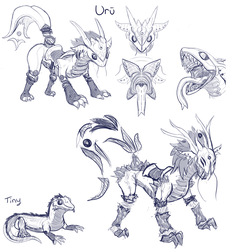 Haha, wow. Out of 200+ images my random roll lands on the OTHER Redpanda / Tanuki hybrid character of mine.
Well that's some fun luck right there.

So ya, This is Heiko, 3 or 4 foot nothin Wah, he was designed to be a character I'll play in an upcoming Pathfinder game. He shares his surname with the other Wah, but I'm not sure yet if either will be really related.
Needless to say this one was designed for an adventure narrative... the other was just me having weird fantasies X3

Heiko here is a Hunter (those are half druid/half ranger types in pathfinder) and he has a budy too! Maybe tomorrow the random roll will land on his buddy x3
Long story short, he's the son of a clan of Yoki (Japanese Fey essentially), the Asshoni, which came about from his parents (a Tanuki father and Redpanda mother) coming together and forming a family that would bridge the two worlds of mortal and Yokai.

Still working out his specific character traits but for now his personality is basically that of Ling Yao (from Full Metal Alchemist) so chipper most of the time and very prone to flights of fancy. He's also a younger heir/prince of his family (which there are many). He leaves his home unexpectadly due to his wonderlust and wanting to see more of the world.

It's pretty basic, I know x3 but I wanted to play a character that wasn't overtly complex in backstory and could be easily molded as the game progressed.

---
You can find my main gallery at:
Roco's Inkbunny Gallery
That is the most likely place I'll respond. That or my Weasyl account:
Roco's Weasyl Gallery
I also have a discord! Come join the server if ya wanna chat:
Roco's Art Discord Server
I also co-own a furry publishing company:
www.swallowtailproductions.com