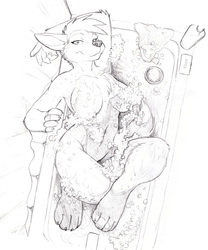 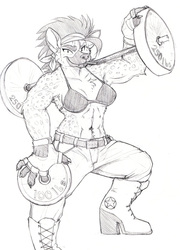 One of the tricky parts of developing the "look" for A&H is the weird restrictions I put on the setting, and being able to make it look "normal" and not like literally everyone is a pervert. (It will a comedic-dramatic PG-13 series, so while looking sexy or perverted is not out of the question, that doesn't mean that MUST be every character for every story)

While females seem to get away with the bottomless look fairly easily (we're more used to seeing women in skinny leggings) it's a different question altogether for males; the "cartoonified, no bottom" look can range anywhere between "wearing low-cut sweatpants" to "David Bowie in Labyrinth"--the latter of which sometimes misses the point entirely.

If I were okay with going entirely casual too that might also be fine, but the stories often focus on professional settings, and so the question THEN is how to make the bottomless characters appear professional when they're like they're literally out of an embarrassing dream at first glance. I think the answer there is "complex tops".

The world will be developed as though this is just "the thing"; no cartoon fur pockets for non-existent pants, all pockets exist in the top. So, "fully dressed, fully professional" tends toward including the most stuff you can fit on a top, even if it might be unnecessary. Men's tops then almost always include pockets, and if not they probably wear a vest or overcoat which does. (Women's tops may also include pockets, but since this is at least superficially based in certain "real world" expectations, they're expected to carry their things in purses)