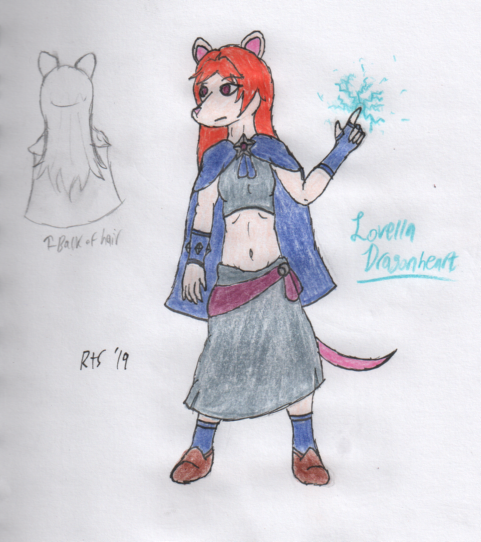 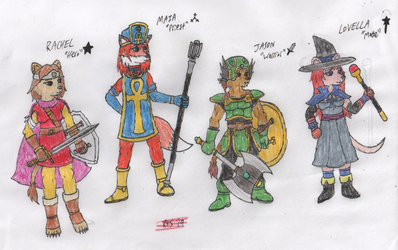 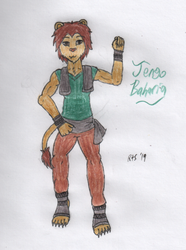 Wanting to bring more use to my lesser-used OCs, I bring to y'all my new reference of Lovella "Dragonheart" Everill, a storm-brewing sorceress who resembles what Sypha Belnades and Gadget Hackwrench would become if they did a Fusion Dance. :p

Her rodent-like folk are known as the "jalquin", named after a titan-cursed demi-god who became the progenitor of their race under a choir of angels known as The Ranaton. The spawn of Jalquin have been underdogs throughout their history, bullied by the pale-skinned humans who ruled the northern lands they shared. Nevertheless, the jalquin mice-folk have become allies of the dwarves and, in the war that exterminated the corrupted elves from the known world a century or so ago, have risen them to equal citizenship with humans.

Thus Lovella's story begins. A capable student of the north's College of Wizardry, arcane magic was second nature to the mouse lass. Hers was a power different from the internal focus of a Seeker, the wrathful invocations of a Pariah knight-shaman, or the borrowing of spiritual power from a chosen or learned Theurge. The art of a Stormcaller mage had to be learned, not felt, but the reward was a highly versatile form of magic that didn't require constant physical and psychological conditioning, nor fealty to otherworldly patrons.

Lovella had a future ahead of her as a sorceress, but drew the attention of an ex-knight of whom she (and much of the citizens in her hometown) hated. Now living in the so-called Age of Wisdom, akin to the early European Renaissance of the real world, knights' role in society was drifting further and further into just a title, and this warrior-noble was stripped of his honor from the lack of loyalty to his superiors and his people. At first, the meek magician was willing to humor the man's advances, but swiftly refused when he became more and more determined to make the mouse his wife.

Things escalated when the fell knight tried to physically force himself upon Lovella... which lead to his swift and horrible immolation by her sorcery. Having never slew so much as a monster with any of her martial magic before, let alone a person, she watched in horror as the gout of flame she cast upon him burned the man alive, his last moments screaming for her mercy before crumbling to the ground in a seared heap. Thanks to the circumstances of the manslaughter, Lovella wasn't imprisoned nor executed for the death of the blackened knight, but was instead exiled. With no place left to turn, she made the journey to the closest area in civilization that had any semblance of a magician's academy -- the Mage's Conclave of Arakhavia, in the southern region of the continent along the coast of the planet's Mediterranean.

From there, Lovella had two self-appointed vows. One, her surname would change from Everill to Dragonheart, reflecting the arcane nature and cruelty of the long-extinct monsters. Two, she would disavow herself from the use of fire magic, preferring to use mundane fire-making techniques and relying on less-inhumane attack spells. In time, Lovella would wind up taking on an adventure to help make ends meet as a member of the loosely-formed Conclave. There, she would meet with a leonine martial artist who made liberal use of chi-powered fireballs against the demons the two would battle in those haunted ruins.

And from that quest forward, Lovella became an arcane confidant and fast friend of Rachel Atiya Ash.