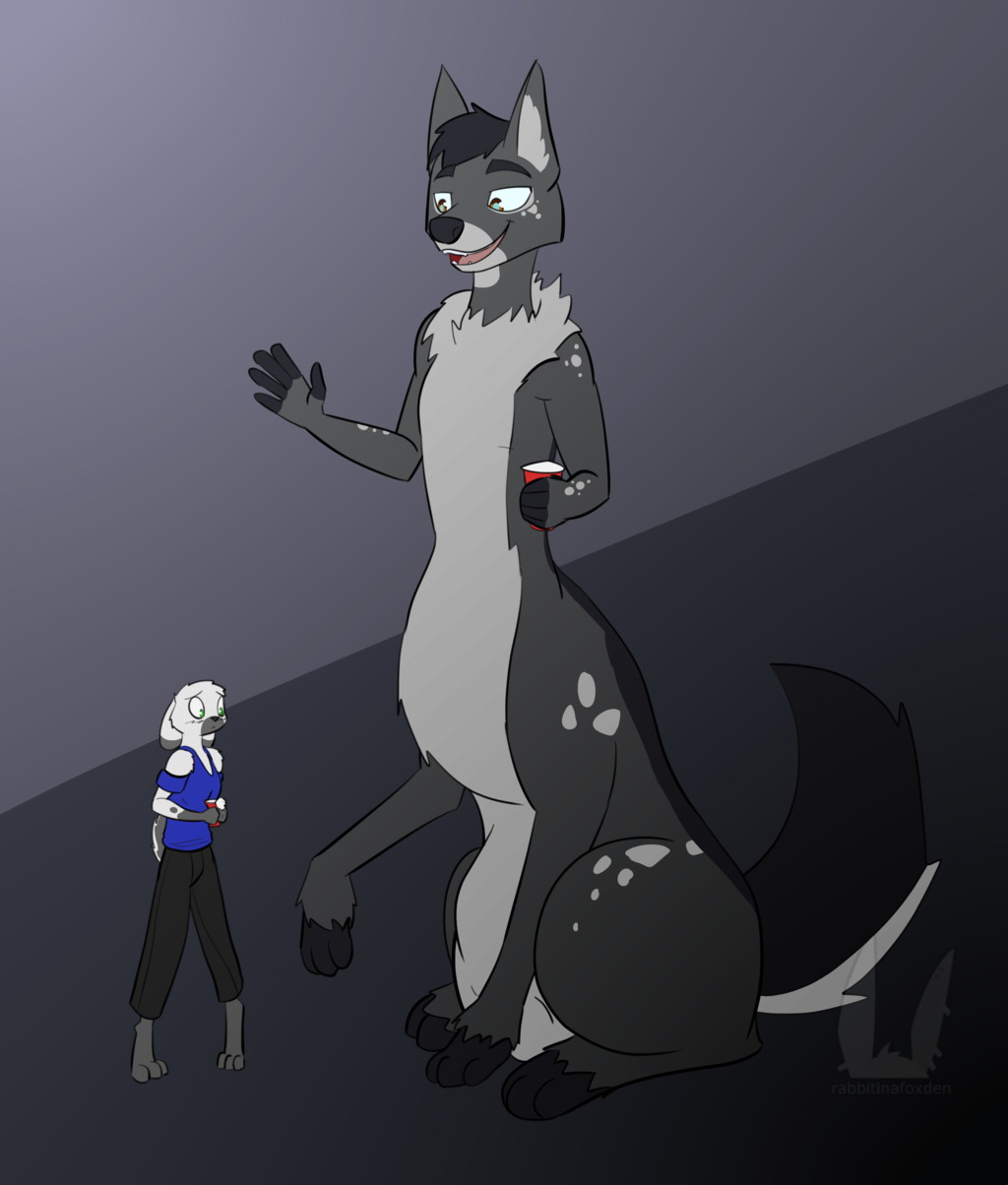 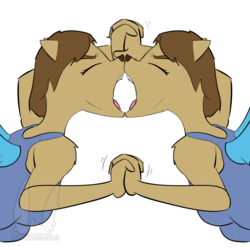 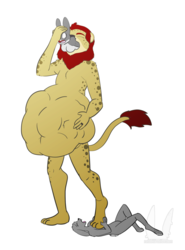 A commission for [url=http://www.furaffinity.net/user/autumnvector]Autumn Vector[/url]! His character Shiloh having a chance encounter with a cute couple.

Chloe swallowed hard. The rabbit's hands were shaking as she clutched the red plastic cup containing her drink. Her knees shook, too, threatening to knock together as she tried to straighten the chaotic swirl of her thoughts.

"Y-you mean me and A-A-Addison?" Chloe asked, trying to keep the stammer out of her voice.

"That's her name? Yeah. I definitely got the vibe that you two are a couple. Have you been together long?"

Chloe slowly looked up -- and up, and up -- at the massive jackal standing next to her. She felt her face flush as she looked at him. He was certainly handsome, even if, at over three times her height, he was a little big for her. He had a fit, lean build, which gave way below his waist to a large "taur" type body. Powerful muscles bunched and unbunched beneath his fur whenever he shifted his weight. His fur was a beautiful dark-grey, with light-grey spots, reminiscent of a deer's. She felt her heart pound against the inside of her ribcage -- Chloe had been dating another female for so long, it caught her by surprise to suddenly run into this handsome jackal who was reminding her just how bi she actually was.

Of course, her pounding heart could be due to other emotions right now. She felt something wet on her fingers, and looked down to realize that she had squeeze her plastic cup hard enough to make it collapse, causing the foamy beer to saturate her fingers.

"W-we met in college," Chloe said. "We were in an intro-to-drawing class together. Neither of us had ever been with a f-female before. We ended up hitting it off, one thing led to another, and we decided to try dating. I guess w-we were right for each other, because that was three years ago and we're... we w-were still together."

"Aww, that's so sweet!" The jackal looked down at her with an enormous grin. "It's always great when things work out like that!"

Chloe took a deep breath. He sounded so... honest. His tone was friendly, and his body language was casual. He seemed to really enjoy Chloe's company. Like he genuinely wanted to chat with her about her girlfriend and hear their story.

As though Addison wasn't stewing in his gut right now.

Chloe could still see her move. Addison didn't exactly make a large bulge in the massive jackal's gut, but a bulge was definitely there. Occasionally the bulge would squirm or move as the squirrel inside struggled for her life. Chloe's large ears could even pick up the occasional scream or sobbing plea for help.

Not that Chloe would be able to help. She wouldn't stand a chance against the massive beast. Hell, he hadn't had a second thought about eating Addison: the two had been talking and drinking, just enjoying the atmosphere of the outdoor club and each other's company. The jackal had just... snapped her up. He had trotted up, grabbed the squirrel without preamble, and stuffed her in his mouth. Chloe had only been treated to the view of Addison's kicking legs and squirming, bushy tail for a moment before they had slipped between his lips and disappeared.

Chloe felt her face flush at the memory. She had watched every detail as the squirming bulge slowly slid down his upper body before coming to rest in his belly. Even now, that powerful belly was working on her, reducing her to nothing but squirrel meat, soon to become a part of that fit body, those powerful haunches, that...

She shook her head, trying to clear it.

Maybe he was teasing her. He could be stringing her along until he got tired of his game. Then he would decide to gulp her down, too, and she would spend her last hours curled up with her girlfriend, being slowly digested by the handsome creature.

But it didn't seem that way. Something told Chloe that his friendliness was genuine. He just honestly, legitimately did not think that eating her girlfriend would hamper them becoming friends. He almost seemed to consider it an icebreaker.

The jackal glanced up at a clock set into the wall of the club. "Oh... I actually have to be going." the jackal said. He turned his eyes back to Chloe. "My name is Shiloh, by the way. It was very nice to meet you, Miss...?"

"It's been a pleasure, Chloe." The jackal brought his drink to his lips and downed the remainder of it, an act that caused the bulge in his belly to release a new round of squirms. "I hope I see you around."

The jackal stood up, lifting his haunches into the air, then turned and left. Chloe watched him go -- watched that barely-visible bulge in his belly sway slightly, carrying her girlfriend off with it. If Chloe were ever going to see her again, it would be as an extra little bit of jackal pudge.

And she couldn't quite convince herself that that didn't sound appealing.

If... if they did meet again... what would happen? Would he finish his meal and take her as well? Or... if Chloe had a new girlfriend by then... would they have a repeat of tonight? Would she get to watch another lover disappear as a bulge beneath the jackal's fur?

Chloe took a deep breath as she pictured it. It seemed she had a lot to think about.