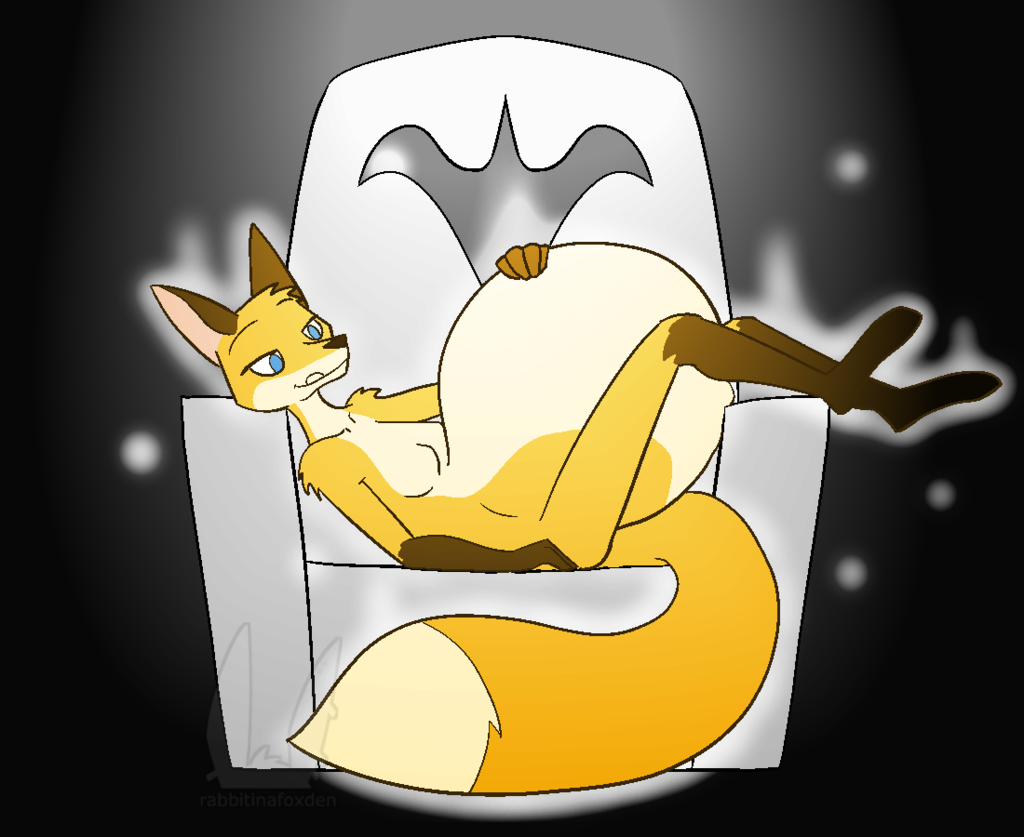 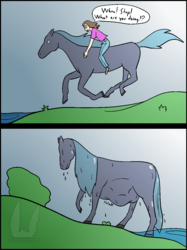 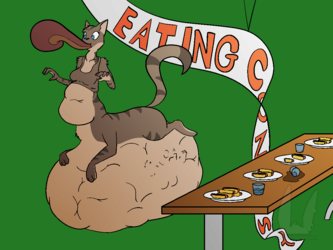 Another story with the fate-stealing fox goddess.

Claris watched as the last acolyte approached the throne. She was a young female mouse -- much like Claris herself -- wearing a voluminous robe over her slender frame. She opened the robe, sliding it off her shoulders and dropping it onto a large pile of similar robes nearby. Clad only in her fur, she watched the throne.

The goddess sitting on the throne beckoned with one fingers.

The female mouse swallowed, her expression twitching between nervous and excited. She climbed onto the throne, into the glowing, gold-furred fox's lap.

The goddess smiled, wrapping her arms around the young girl's shoulders and pulling her close, as if for a kiss.

It happened in an instant. One moment the mouse was there, straddling the goddess' legs, her own flat belly pressing against the goddess' large one. And then she was gone, slurped into the goddess' gullet, her feet and tail disappearing between her teeth. The goddess' belly bulged out slightly larger, and she turned to one side, laying back against one arm of the throne and propping her feet up over the other.

Claris stepped forward, approaching the throne. She reached out with one hand, stopping tentatively near the goddess' belly.

"Go on," the goddess said. "You may touch it if you want to. In fact, a belly rub might be nice."

Claris placed her hand against the goddess' belly, running her fingers through the soft fur. She had never attempted to turn down a request from the goddess, and she somewhat suspected that if she tried, she might find it literally impossible to do so.

The belly was perfectly round, as though the goddess were carrying a large litter, and large, though not nearly large enough to contain the number of people she had just seen disappear into it. In fact, Claris had seen the goddess' stomach much larger after smaller meals, so she must have used her power to make it appear smaller this time.

After a moment, Claris brought her other hand up to the goddess' stomach and began to apply more force, kneading the soft orb of flesh and fur.

The goddess closed her eyes and released a soft moan. "Thank you, Claris. That feels very nice."

Claris nodded. After a moment, in a conversational tone, she said, "I must admit, Mistress, I am a bit surprised at what happened here."

Without opening her eyes, the goddess smiled. "Truly? It was you who suggested we come here."

"Yes, but I just thought you might like to visit some of those who worship you. I was not expecting you to convince the entire population of the temple to climb down your throat." Or at least, as much as the word "convince" could be used here -- many of them had been in a trance induced by the goddess' powerful presence.

"They had done well in serving their goddess. I wanted to give them an opportunity to serve me in an even greater capacity."

The goddess opened one eye. "Claris, are you... happy, serving me?"

Claris tensed, but then regained her composure and continued kneading the goddess' belly. She thought for a moment before answering, as she wanted to be honest -- she was sure the goddess would be able to tell if she tried to lie. "Yes, Mistress," Claris said. "I admit, serving you has been... often surprising, and sometimes a little frightening, but you've given me a purpose that I never had before. I do not regret having been claimed by you."

"That is good," the goddess said, closing her eye again, apparently satisfied with the answer. "There is a village nearby, is there not? Take some money from the temple's coffers and go buy some supplies. Buy a nice meal for yourself, too. I will meet you in the village later. Perhaps there will be more living there who want to serve me."

"Yes, Mistress," Claris said. She ran her hands across the goddess' belly. "Um..."

The goddess let out a contented sigh. "Claris, you may continue doing that for as long as you please."

With the smile still on her lips, the goddess relaxed, and Claris continued to massage her, happy to serve.