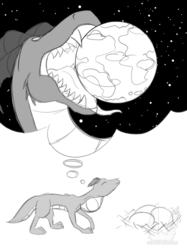 The ringing of Kaylee's alarm clock pierced through the silence of the bedroom. The rabbit groaned, reaching over to slam her hand on the snooze button before burying her face in her pillow.

Her whole body ached, begging her to stay in bed for another hour. It would take weeks to rebuild her circadian rhythm, and for what? To save on electricity? Everyone knew that Daylight Savings was a scam, anyway. They should just abolish the whole thing once and for all.

But until that happened, there was no helping it. She was going to have to get up, change out of the comfy extra-large t-shirt, and get ready for work. That was what she got for not being a layabout and actually getting a job: having to wake up early while her sisters got to sleep in.

Kaylee still had her eyes closed, but her large ears twitched. She heard something. Muffled voices? And they didn't sound happy. Was a fight going on somewhere else in the house? Why would anyone else even be awake at this hour?

Groaning again, Kaylee rolled over and opened her eyes -- only to find herself staring into an unexpected sight. She caught a glimpse of sharp fangs, a glistening tongue, and a pulsing tunnel. Hot breath washed over her face, causing her nose to wrinkle.

Then everything went dark again.

Tanya tilted her head back, slurping up the pair of kicking legs. Her fangs snapped shut behind the large feet with a click, and the bulge slid down her throat and into her belly.

The bed creaked and groaned under the weight of the vixen. Tanya's stomach was an enormous, squirming mass. The vixen's shirt had given up trying to cover it, bunching up at the top of the furry orb.

Tanya jumped at the sound of her cellphone ringing. She fished the device out of her pocket, swiped the screen to turn it on, then put it to her ear.

"Hey, Tanya!" The voice from the other end sounded cheerful and peppy. "How's your morning going?"

Tanya opened her mouth to answer, but no words came out. Instead, she felt a rumbling in her gut, and a loud, ringing belch filled the room. "BRAAAAP!"

"I guess that means it's going well," the voice said.

Tanya smiled. "Haha, Janet. Yes, it's going (urp) great. I may have actually overdone it a bit."

The vixen patted her squirming gut. "And her five sisters. And their mother, who looked like she was about ready to drop another litter."

Tanya rolled her eyes. Janet wouldn't have called to brag about just that. "And...?"

"Awesome!" Tanya said. She paused to release another small belch before continuing, "Of course, now neither of us are going to be able to so much as walk for at least a day."

"Small price to pay. Best hunting day of the year; so many tired, sluggish prey. Gotta take advantage of it while we can. Anyway, I'll let you go. I'm sure you've got a lot of digesting to do."

Tanya smiled as she ended the call and placed the phone on the bed beside her. Leaning back against the headboard of the bed, she ran one hand over the squirming mound of her belly. She released a contented sigh.