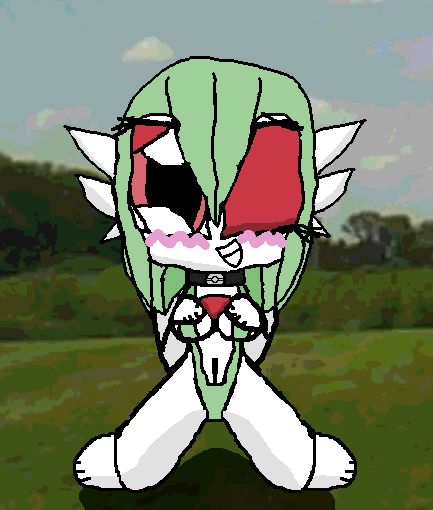 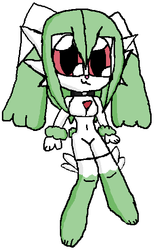 I had re-submitted this, from FurAffinity.

I decided to draw a new poke-folk gal; this time, a Gardevoir! Her name's "Gizella".

Her parents, even from before they had her, had been making a living, off of stocks.

Sometime in the future, when she was around 10 years old, (at least no younger than that, anyway) her parents gave her permission, to go out on adventures. Unfortunately, there was no Pokemon professor, in the small town, that she lived in. Luckily, she found a wild Machop; (non-anthro, of course) which she easily befriended, and then used a pokeball. (By nowadays, he's currently a Machamp; one that is the bodyguard, of his own trainer.)

Sometime in the future, (when she was 18 years old) while she's currently saving up money within stocks, (so not
only can she travel around the world, but help others in need) she got into a backup hobbyist job, as a freelance fashion model. (Since she soon became well-known, anyway.)

Personality-wise? Gizella is incredibly polite, but in terms of a lot of strangers, though she's a tsundere; mostly because, she doesn't want someone to simply MARRY her, or use her, for being rich. But never the less, she has a heart for pokemon. (If you want to win her heart, do it right, and, don't rush on the romance; take it nice and steady.) She's also very bossy, when workers slack off, and DO NOT LISTEN, but she's not a bully about it, so, don't worry! XD

In this pic, Gizella wanted to model a newly bought swimsuit, but at the small town she visited, she only bought the sling-kini, because at the shop, among the ones that fit her, it was the only one that she felt, looked at least, "decent" on her, and, as for the other swimsuits that fit her, they looked ridiculous, and were actually out of style; even to the point where, she didn't bother. (Also because, it was hot outside.)

But why is Gizella blushing? She's not embarassed; in the pic's backstory, a guy that was her childhood friend, actually visited this town, as well...and because, while she has a bit of a crush on him, (and wouldn't mind cuddling with him; especially due to trusting him, as a friend) she's also a bit nervous, yet flattered, about when was trying to flirt with her.

She would have gone to a pool, beach, or waterpark, (maybe even a decent lake, that's suitable for swimming) but there was none, that she could find. So, she simply decides to head over to a more beautiful part of the countryside, to relax. (Luckily, she also brought a cooler with beverages, too!)

For those that are interested in her; she AT LEAST wouldn't mind having friends, but, in order to win her heart, you have to prove yourself trustworthy; she doesn't care, whether someone is rich, or poor. In fact, she means well.

Which young man, around her age, would she fall in love with? That depends on which reality.

As for her hairstyle, it's kind of a slightly spiked bobcut, that is semi-long.

= Gizella, alongside the artwork, are (c) by me
= The "Pokemon" franchise is (c) by Nintendo