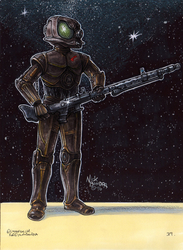 Heeeeeeeere's Zuckuss! Not 4-LOM. Zuckuss is one of the 6 bounty hunters from " Star Wars, The Empire Strikes Back " hired by Darth Vader to find Han Solo. Back in the '80s, Kenner had the action figure's name mixed up with his droid buddy, 4-LOM, so it took a good decade for the masses to know who was who. I sorta figured it out on my own cuz 4-LOM sounded more like a droid name and Zuckuss worked better for a bug dude's name... but I had a lot of time to think on such deep subjects. I remember back when you could send away for a free Zuckuss ( then called 4-LOM ) action figure with 4 ( or maybe 5 ), proofs of purchase. The first half of the 1980s were pretty cool... although once one's peers began hitting puberty, it kinda took a turn... But Zuckuss! Let's hear it for Zuckuss! HURRAH! He's not simply a bounty hunter, he's a " FINDSMAN "! ... or so doth decreed some nerd. ;-) As for Zuckuss' appearance, it's kinda hard to tell where his body ends & his ... apparatus begins. So, once again, let's hear it for Zuckuss! HURRAH!