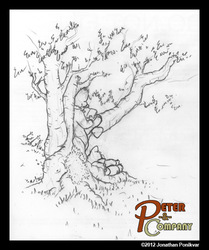 Here's the latest complete style test for Peter's mouth shapes, experimenting with his emotions and facial expressions. This is primarily a lip sync and emotion test; his hand shapes are just placeholders at the moment, as the rest of his model puppet has not yet been refined at this stage.

This test also features the first recorded dialogue of Seth (heard off-camera) by his voice actor, Christopher Wade. This specific scene will not appear in the pilot, and instead just uses a sample line of dialogue from one of the pages from the "Whitney's Birthday" storyline of the online comic.