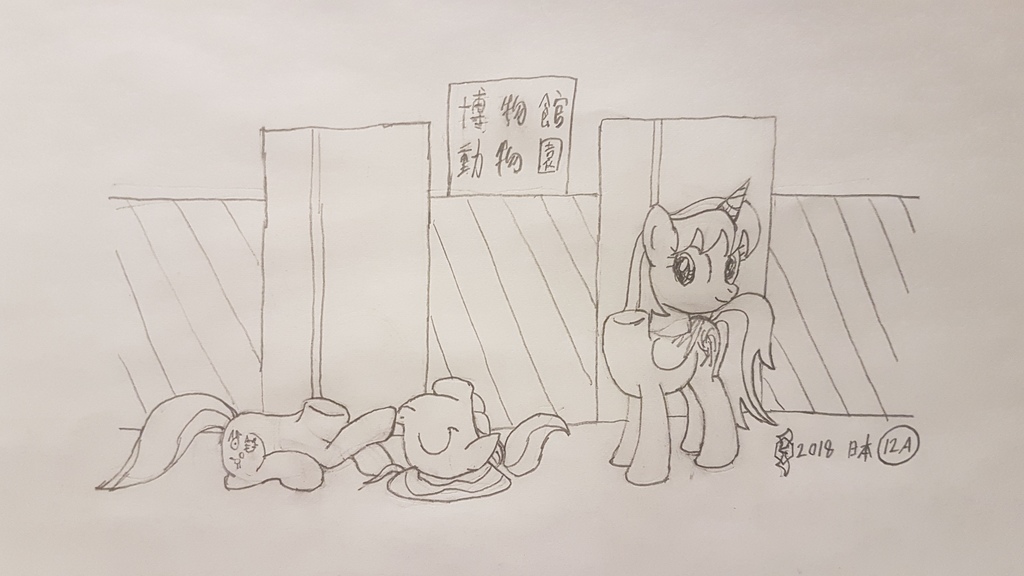 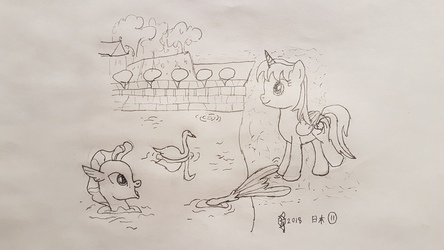 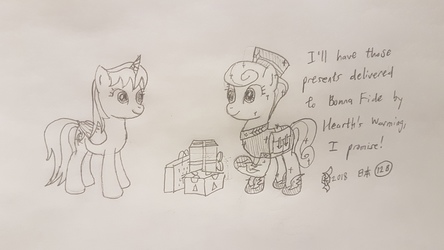 Parcly Taxel: I woke up at 8:15 on Spindle's rubbing, the feel of a cocktail on the rocks percolating inside the glass. The two doughnuts from the day before and a bowl of cereal were all I went on for breakfast before picking up my subway pass and leaving. Genies don't need to wash up; they always come out supple with perfect hair after a full sleep in their bottle.

Spindle: At the same time, however, a genie is most receptive to wishes just after being released, when the wish-granting magic is still settling down. I exploited this to great effect on the journey to Ueno Park, wishing her to run or at least walk briskly whenever not in a train. We still had around two hours left on the subway pass – it was rated for 72 hours – and my eyes were gleaming, as a windigo when they've spotted prey, when we successfully passed through the ticket gates.

Parcly: Through the trees and fallen leaves, over cobblestone and dirt, I kept my pace until finding a string of ponies in the distance. When I entered that queue I estimated about 120 ponies before me, less than the daily limit of 300, meaning I would get my reservation this time around… starting at 12:40 as stated on my ticket. "What to do in two and a half hours?" Returning to my accommodation and back would be a stretch, so I simply waited near the JR Ueno station.

Spindle: "Brutalist" would be a way to describe the exterior of some of the art galleries/museums in Ueno Park. The Tokyo Bunka Kaikan (東京文化会館), with its "inverted wedding cake" propped up by bare concrete columns, even looks like the archetypical example of brutalism, Boston City Hall. Inside these institutions, however, the presentations are at least decent.

Eventually Parcly grew tired of waiting in the open, not intending to visit the museums, and took a diversion somewhere near.

Parcly: Drizzling and huge walking crowds greeted me at the Harajuku exit, then tailed off in an equal time. I heard that the area is a favourite with cosplayers who take to the streets in their anime-accurate best, but none were to be seen; instead I simply admired the ponies passing by from a sheltered place, killing time before the abandoned station visit.

Spindle: That station, Hakubutsukan-dōbutsuen (博物館動物園), lay on the Keisei Main Line (京成本線) and closed around 20 years ago. It has obviously been brushed up a bit to look more appealing to visitors, but the rest is authentic: dilapidated stairs graced by graffiti, plaster on the walls peeling off. As part of the exhibition, a giant rabbit head-first in the floor dominated the entrance, and model torsos of animals with their respective skulls on top were scattered across the lower level.

Parcly: The platform level was walled off by a glass surface, but there were chalk pens to write on it, which I duly did. Because the line carrying this station is still fully operational (with service to Narita), passing trains rumbled loud and clear, reinforcing the sub-theme of death and rebirth. On the stairs leading down was a projector showing snapshots of the station when it was still open; animals used to grace the walls, referencing the Ueno Zoo.