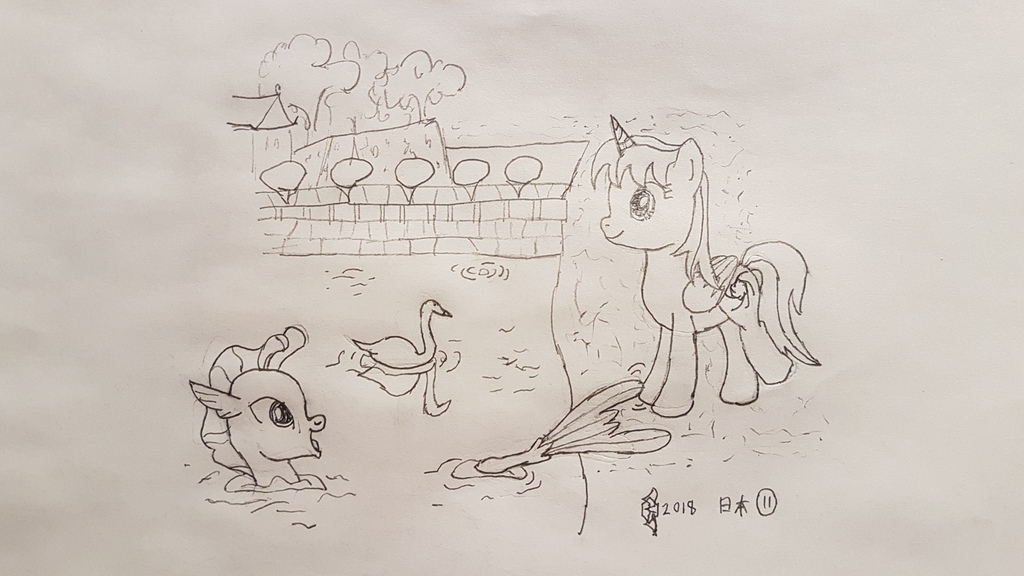 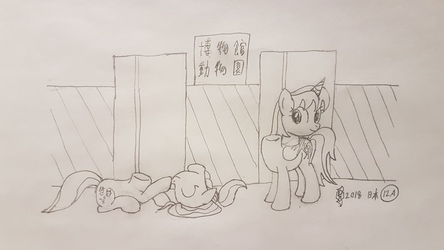 Parcly Taxel: Nishi-sakai lies in the east end of Tokyo, in analogy with directional regions used to describe other cities, while the major tourist attractions of Shinjuku and Shibuya lie in the west end. Tōzai happens to be an east-west line, saving some of the time spent navigating around interchange stations, some of which are old and complex enough to require passing ticket gates twice. Other points are not as lucky, like Zoshigaya (雑司が谷) on the Fukutoshin Line requiring a change at Ikebukuro to reach the "spaghetti core".

Spindle: The bed's blanket in our accommodation was thick and slightly rough, much like the inside walls of the Albumin Flask which acquired their feel from countless waves of Parcly's lapping genie mist.

Princess Luna: With these properties suitably emulated in the physical world, her path to sleep and dreamspace began by laying on top of the blanket with her flask below. Then she closed her eyes, and while still holding a sliver of consciousness opened the invisible magic stopper in a flick of her horn. Her flow into the glassy confines was extended by her sublime form brushing the blanket, a process comparable in comfort only to the Saddle Arabian method of slithering on sand.

Spindle: A test train stopped at Nihombashi when we came to the Ginza platforms. It was less illuminated than usual and left without opening its doors. "Strange," I whispered to myself, the voice manifesting as small ripples in my ghostly coat. "That's the first time I've seen a non-passenger train in Tokyo's subway system." (There were a few ponies inside the dim cars, though.)

At Ueno we set our sights on a former subway station that had been opened up. Before even entering the park, a guide staff told us that a reservation had to be made and all the day's tickets had been snapped up.

Parcly: It seemed that we would have to book online, but when we arrived at the former station itself its guard said that tickets were available less than 100 m away, which we noted down. Returning through the park, I admired the many ginkgo trees lining extra-wide squares and avenues; it is the metropolitan tree and the symbol of Tokyo was derived from its leaves.

Spindle: In contrast to Ueno, Ikebukuro appears on first glance to be a pure shopping district, without slower-paced attractions. Nevertheless we first had lunch at Mutekiya (無敵屋), a very popular ramen restaurant with locals and tourists alike. The seats form two L-shaped bars clasping the kitchen and pre-orders must be made (i.e. before sitting down), but those points didn't prevent the outlet from earning very high reviews. One of the menu's bowls was created in response to tourists' queries.

Parcly: I left with a warm and heavy belly, exerting a little inertia when twirled. While in another building, since I knew I would be coming back to Ueno, I charted a course towards something more permanent, more symbolic…

Parcly: Sakuradamon is the southern gate to the environs of the Tokyo Imperial Palace (皇居). In two days the inner grounds would open to a flood of visitors with tiny Japanese flags, all facing the Emperor of Japan. We would merely content ourselves with the public parks at north- and southeast.

Spindle: As Japanese history has passed through upheavals and relocations of the capital, so has the palace been burnt or otherwise destroyed in places and rebuilt. It used to be much larger, before bombing raids in the last great war fought here dealt extensive damage; those parts too pitted with craters were converted into the public parks.

The southeast gardens (皇居外苑) are really a huge plaza whose walkways are covered with gravel, sporting impressive fir trees. An entrance to the palace proper (宮殿) lies at the end of a slight incline, and when we came was blocked by two layers of barricades. To our pleasant surprise, after staying there for around five minuts a changing-of-the-guard ceremony took place, which the guards didn't mind being captured.

Parcly: A second, smaller gate led across the moat to a different walled structure. It was closed off, so we wall-followed to the right and found a larger gate saying…

East Gardens (皇居東御苑) are closed on Mondays and Fridays

It was a Friday, and I quivered at the runners coasting behind me (a loop around the entire complex is a popular running course) as I checked out the days when the gardens would open. "At least I can come tomorrow…"

Spindle: The Imperial Palace forms a clear "hole" in the middle of Tokyo's subway system, and the stations on its south, west and north sides (Sakuradamon, Hanzōmon and Takebashi 竹橋) are all named for structures leading into the grounds. We proceeded east along the wide road connecting it to Tokyo Main, then into the underground shopping passageways looking for a Starbucks.

Parcly: Eventually we did find a Starbucks in an adjacent building; I chilled out (or would that be warmed back up?) with pistachio-laced coffee.

Parcly: The Yodobashi branch at Akihabara is, in accordance with the surrounding area's mores, frequented by lovers of anime and gamers, especially its sixth floor. Above the main store are independent outlets, which we spent some time going through in a continuation of the unwinding from our exploration of the palace grounds.

Spindle: We ate dinner at nearby Gyukatsu Motomura (牛かつもと村), whose menu was limited to two pages: one for the main dishes of self-cooked beef sets and one for the drinks. Parcly wasn't fond of the cooking and for the most part just dipped the beef slices in the provided sauces.

Parcly: Back on the food street fronting Yodobashi I bought a few pastries. Time of day, day of year, proximity to major hangouts, all contributed to constant snaking queues at one shop. I could have asked Spindle to breeze through the waiting ponies, but that would be a rude surprise; she lined up as per normal. (Although ethereal and part of my heart, Spindle can be treated as a separate creature at events like the Grand Galloping Gala, for which she wears a sparkling icy blue dress that doesn't phase through walls.)

Parcly: When I returned to the accommodation I ate one of the pastries, a chocolate cake, and set aside the other two for breakfast. A good thing, since I was set for a lamia-length trip across Tokyo and back when I woke up after mere hours!