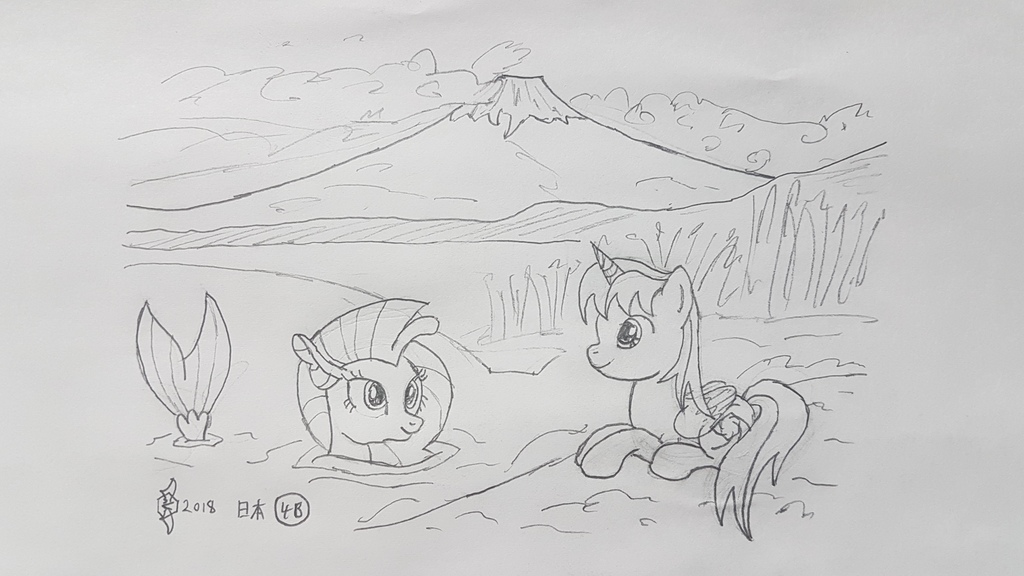 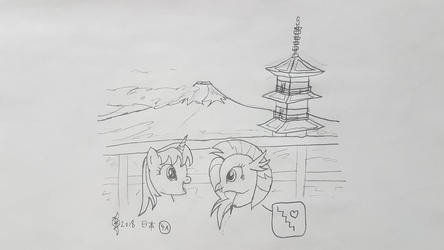 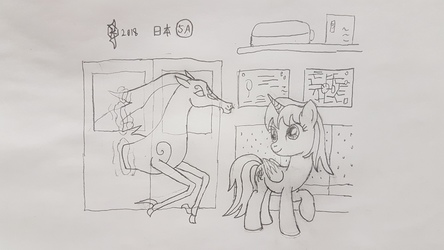 Parcly: With all corners explored on top, I went down to the lake, full of shoreline restaurants and hotels. Kawaguchi is the only one of the Fuji Five Lakes (formed when ancient eruptions stoppered rivers) with an island, and tourism posters for the Five Lakes usually show it.

Spindle: Where we first encountered the shore at the eastern end, we bought a cheesecake and ate it en route to the northern end clockwise, giving Parcly a little energy and me a fresh serving of emotions. The marker for the World Heritage Site status of Mount Fuji is there, as were yet more tourists and a souvenir shop-cum-café, since this is where the mountain's reflection can be most easily seen.

Silverstream: My shapeshifting necklace glowed upon reaching the water's edge, and I waded into the deeper blue as a seapony. I'd definitely recommend this to Terramar!

Having taken in so much beauty that their hearts could start a fire if ignited, Parcly and her windigo friend had lunch at a local restaurant called Yabu, not far from their accommodation. A big lunch indeed – tonkatsu and rice with the usual regular and seasonal condiments (the fruits being orange and pineapple).

Parcly: When we stepped out, Mount Fuji was already covered by clouds. That was OK, since it had moved us many times over, so we now travelled backwards into the rolling hills between the lake and the mountain. To our surprise we ended up in another part of the World Heritage Site complex, the springs of Oshino Hakkai (忍野八海) where pilgrims used to purify themselves before climbing up.

Another tourist magnet was before us. An eight-metre-deep koi pond glittering with coins at the bottom, despite written messages against throwing coins, carried potable water melted from the summit's ice. Single-purpose water bottles and yet more local specialities were on sale.

Spindle: Returning to the town of Kawaguchiko, we composed ourselves at the Bell shopping centre, taking out a Poké Ball Mister Donut and a limited-time beef bowl from Sukiya. We took them out because we needed the time-

Twiney: Oi! Are you trying to catch me with that Poké Ball?

Parcly: It's a doughnut, Sylveon me, we're eating it.

Twiney: Sorry… that doughnut's rather cute, actually. Chocolate and strawberry are the main flavours. They're available at Mister Donut branches until Hearth's Warming.

Spindle: Ah, let me continue. With takeaways in hoof, we returned to the accommodation to clean and pack up for the next leg of our journey in Niigata. The train we'd fixed our eyes on was leaving very early, so we needed as much time as possible.