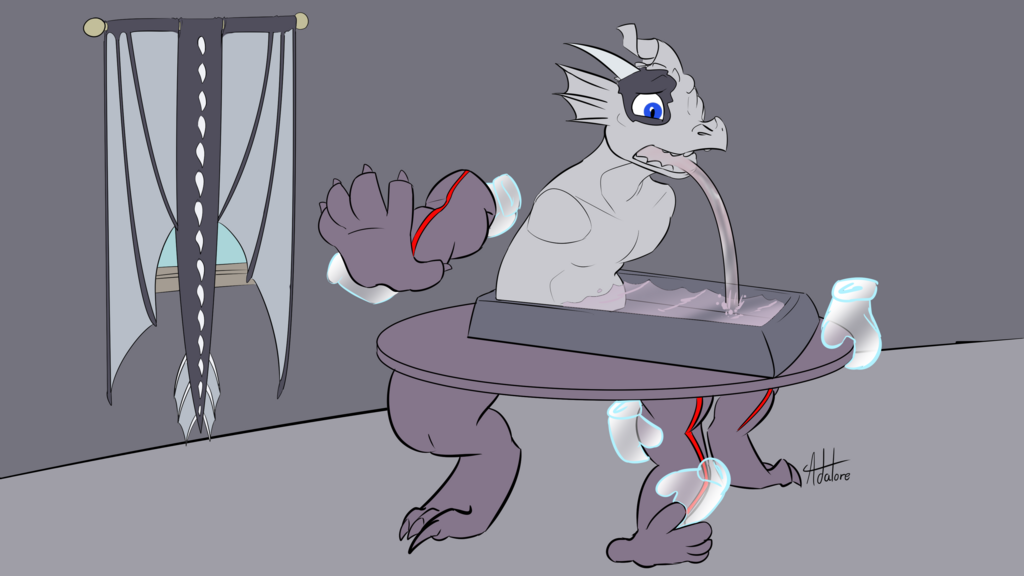 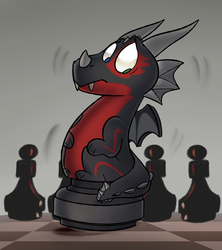 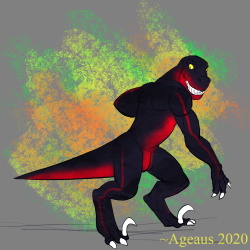 "When they said he'd be serving the fruit punch & be the center of the Halloween party, this probably wasn't what he had in mind!"

“You did agree to help decorate, especially after what happened last time!”

Keeper, as she was affectionately referred to, was the guild’s head Groundskeeper. While being a talented mage, she was actually speaking over the intercom.

“I’m sure everyone has done some things they regret while black out drunk you know!” Arysdron sighed.

“Well, this time, you’ll be serving the fruit punch, but you’ll still be the center of the party.”

Arysdron strode into the room as the doors slid close behind him. The room was pretty bare, but with boxes of party decorations stacked in the corner. Some furniture, such as folded chairs, were also leaned against the walls and scattered around the area.

“You want me to set all this up by myself?” Arysdron stared. “You’re not even on-site right now!”

“I’m watching the cams and I’m using these.”

Arysdron jumped as several ghostly hands flickered into existence. Likely multiple copies of the Mage Hand spell, which Keeper was probably channeling through some magic enhancing spell stones. It was a fancy use of combining tech and magic, and it certainly had required some preparation.

“If you had these already set up, what do you even need me for?”

A couple of the ghost hands suddenly grabbed Arysdron’s elbows and yanked. In a surge of magical energy, they pulled his arms off at the shoulders.

“What the?!” Arysdron gasped in shock. The feeling in his arms had abruptly vanished as he stood there, stunned.

Another pair of ghost hands grabbed his knees while one more grabbed his tail. He was abruptly shoved forward by another ghost hand pushing his back. The feeling in his legs & tail suddenly vanished. At the same time, his view spun as he hit the floor in a daze.

Arysdron was struggling to regain his senses when he felt his wings removed as well. Lying chest down on the floor, he realized that he was just a limbless torso now.

“So much for decorating!” Arysdron couldn’t feel or move his disconnected limbs. With just a head & torso, there wasn’t much he could do.

“I was serious about that part though!” The ghost hands picked up his separated wings & tail and shook them. In a flash of magical energy, the limbs flattened out and became cloth. The ghost hands then brought them towards the window & hung them up like curtains.

“Hey! Give those back!” The wall was fairly close by and Arysdron begun crawling on his chest and shoulders towards it.

It was however a slow process and he could only watch as the ghost hands now picked up his disconnected legs. The ghost hands weaved more magical energy over them, transforming his legs into a metallic texture. They then brought the legs over to a circular platform, connecting them to the bottom like they were table legs. The metal his legs have been transformed into flushed perfectly with the table’s texture, making it look like his legs had always been part of the table.

The ghost hands then begun doing the same thing with his disconnected arms. First transforming them into metal, then twisting and re-positioning them to make the remaining legs of the table.

Meanwhile, what was left of Arysdron had managed to wiggle himself over to the wall. With some struggling, he managed to brace himself against the wall and get into a position upright, balanced on his waist. Leaning against the wall, he got to wobble a few ‘steps’ before the ghost hands grabbed him by the back of his neck.

“I didn’t sign up for this prank….Gwarrghuugh!” Arysdron’s voice was cut short as the ghost hands shoved something into his mouth. It tasted like clay for a moment before it froze his jaws in their currently open position.

The substance rapidly flowed down remainder of his body, turning it into a gray plastic material. It frozen his neck and everything below, locking everything into place. The ghost hands put a large collection tray on top of the table and now placed him down into, clicking his waist area into place.

Arysdron couldn’t move the un-transformed parts of his face enough to see clearly. But then he heard some liquid being poured, felt an odd sensation and then saw pink liquid start spewing from his open jaws. It was fruit punch!

The rest of the petrification completed itself, locking his view into place and preventing him from moving any part of his remaining body.

“Ah perfect, let’s show you how you look!” The ghost hands pulled a tablet out of one of the nearby boxes and snapped a bunch of photos. They then showed the photos to Arysdron’s point of view.

He was now a punch fountain! Still in the rough shape of his head & torso, with the punch spewing out of his mouth and into the collection tray he was connected to. He’d been placed on top of the table, whose legs were made out of Arysdron’s own arms & legs. And with his wings & tail turned into the curtains hanging on the nearby window.

“Told you that you’d be serving the fruit punch and you’d be the center of the party.” Keeper chuckled. “You do make an excellent set piece for this Halloween party, if I do say so myself! Now, I have to get the rest of these decorations up too. Hey, if you’re well received, maybe we’ll loan you out to the other departments!”

Unable to move or speak, Arysdron could only mentally groan in frustration.