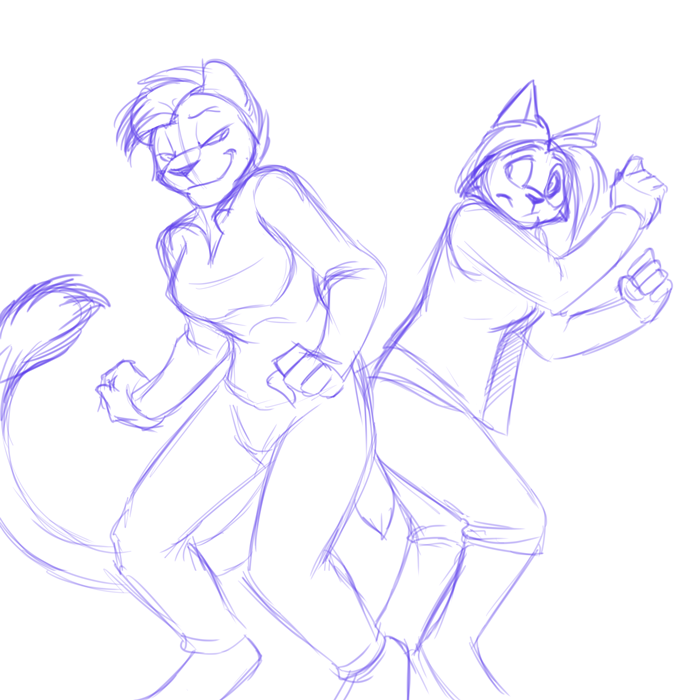 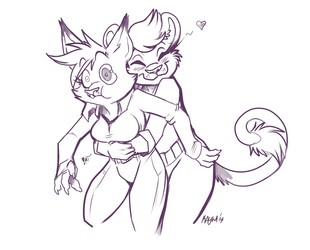 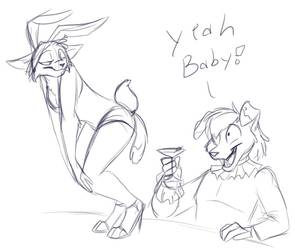 Well here is a small start to my latest story. The first chapter based on this picture. This chapter is more of an opening really, not very big but it gets the ball rolling. Enjoy.

On the dance floor of the downtown club, Electric Blue, Evay found she was having a wonderful time, a break if you will, from her training and other days spent toiling for cash in her pockets. The atmosphere was electrifying; young bodies raving before the DJ, bathed in pulsating azure lighting effects and Evay was in the middle of it all. As Evay swung her hips about, she kept an eye out to avoid anyone, right up until someone bumped against her.

The kind of bump Evay received was no bump of the accidental kind. This was a kind of bump that wanted attention and Evay meekly peeked over her shoulder to find a grinning lioness purposely backing into her.

Evay froze as the lioness, fur as sleek and dark as satin, slowly batted her eyelashes, making the electrical blue colour in her irises flash like sparkling diamonds. Hair as white as the lynx’s own partially hid her face. Her clothes were mostly a shade of purple with patterns of black. Next to the lynx, she was tall, dark and mysterious, and her alluring grin even more so.

Unable to match the lioness’s confident countenance, Evay returned a cautious smile. Not averse to making new friends, she decided to bump back. The lioness returned the gesture with another bump and Evay, starting to chuckle, bounced back with her backside slamming with the other feline.

Evay and the stranger danced back-to-back for a while until the lioness’s tail crept around, guiding Evay to meet her eye to eye, even though the lynx had to tip her head back. The lioness stepped in close, her hands on the opened lynx’s jean collar. Her breath was scented like strawberry bubble gum and her bodily odour sweet and inviting to the lynx.

The lioness whispered with a seductress tone, her tongue rolling the R’s. “Prrrrray tell me, Lil’ Lynx, what be your name?”
At the sound of the voice, Evay felt her heart beat faster and her loins throb with excitement. “E…Evay...”

The lynx reciprocated with her paws now resting on Tox’s hips. Evay’s heart matched the rhythm of the music but as her hips were swayed by Tox, Evay felt an increase on the rise and her thoughts swirling into an abyss, a romantic rush overtaking her mind. Looking at Tox, Evay felt an aura of familiarity surround her; as if her fractured memories were trying to piece together a jigsaw puzzle. What came of the feeling was a sense of admiration for the lioness, as if an intimate bond was forged from silent vowels of heavy breathing, racing hearts, connected minds and a strange mix of chemistry not yet understood.

Evay and Tox danced intimately for some time, never taking their eyes off one another or releasing each other from one another’s embrace. The louder the beat of the music became, the harder Evay’s heart pulsed. A warm ‘n’ fuzzy feeling washed over Evay, drowning her mind in a sea of ecstasy as her mind pieced together what memories it could pull out of the deep recess of her subconscious mind. Tox was familiar somehow, but a stranger all the same.

“Who…Who are you? I feel like I know you from somewhere?” Evay asked, having to shout over the club patrons and the music.

Tox bent down. “If you have to ask, you are not ready to know, and I won’t force the memories from you…you have to discover who you are only if you want to…not because you should feel like you have to.”

Evay lowered her brows and frowned with concern. “You know who I am…don’t you?”

The lioness licked her chops as she walked by, swaying her hips that accentuated her domineering demeanour. “The question I’m dying to know, Evay… do you remember who I am?”

As Evay pondered Tox’s question, the lioness was swallowed up by the crowd. Evay scurried about looking for her and as her search led her outside, Evay learned that the lioness was quick to invade. “Who…who the fark was that? She…she feels…like…someone…I know….”