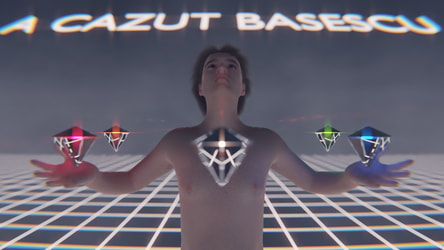 Today I'm happy to announce a new game as released, this submission is the title screen which also serves as an announcement. Escape from Nibbles is a pill tetris game intended to simultaneously be a bit of an ASMR experience to lose one's self in, based on the 16 color style and feel of the early MS-DOS era: The goal is to match pills of similar colors in a straight line of 3 connections, remove all targets that appear at spawn to proceed to the next level. It comes with a few unique twists, such as colors having different status effects which influence game; You can press the ` key at any time for more information on those and how to play, WASD and the arrow keys can both be used to move items. In addition you can set your player name by typing it after the # symbol in the URL and refreshing the page, note that it will be cropped to 8 characters due to textbox limitations. The game is written in pure HTML5 / CSS / JavaScript with less than 1000 lines of engine code.

The game is technically still in beta with some parts yet to be finished. It is however in a playable state with its core structure finished. As it runs directly off Github I don't plan to even bother with versioning: It may progress as it goes along for as long as I'm still developing it. This is a huge milestone for me not just because it's a finished project I managed to put together in a surprisingly short amount of time, but one where all graphics were made entirely from scratch by me without forking visual assets from public libraries.

The project is FOSS and licensed as CC0 / Public Domain meaning you can do whatever you want with it. Shout out to RubberDuck for the sounds and Centurion of War for the amazing music they provided to the public and are featured here. You're free to share the game obviously but I'll officially be publicizing it only a month from now, for the next 30 days this early beta is only made public to patrons. The game is thus playable as of this week for anyone pledging 1$ or more on Patreon or SubscribeStar. You can find and play it at the following posts:

Let me know what you think and suggest any improvements that come to mind! More on this project soon to come, it will probably be the focus for at least the first half of this summer.