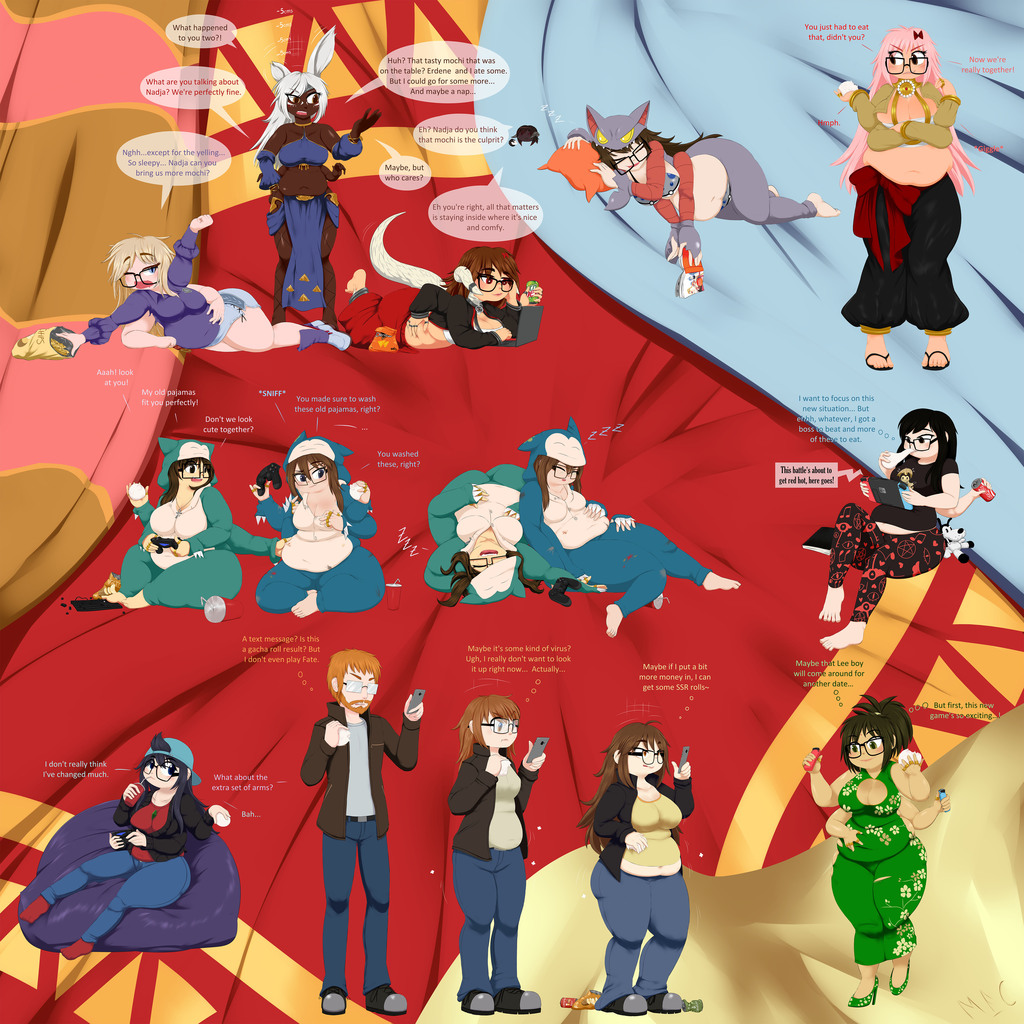 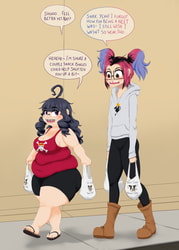 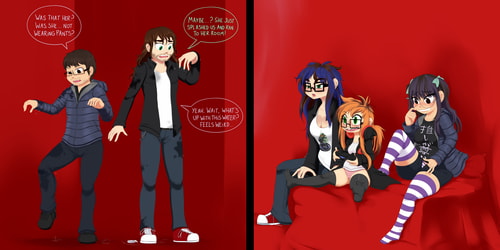 Funny, this Stream Batch event was actually quite a long time coming, I had pushed it further mainly because I didn't think there'd be enough interest, then I had settled on doing it on September 10th because that's Ganesha day, but the dates wouldn't match all that well I just went with it this week, and it actually attracted a nice bunch of people, I guess lots of my commissioners wouldn't mind being four armed fat lazy girls :v

So, for those unaware, the idea of this event is character transforming into the character Jinako Carigiri from the Fate series via mochi cakes, you bite on them, you'll end up just as soft as the mochi.

This is the 19th of the AGW Events, the previous ones being:

I guess you could say this one was "Tested" by TheUrbanLegend52 and I?
Mochi Mochi, Jinako Desu

1º - ALT - TheUrbanLegend52 started this batch, with starring theirs, Hypershadic123, AnonymousDevi and Kaiza-TG's Final Fantasy XIV characters, in different stages of having tried the mochi cakes, Dreah and Mitsu already fully transformed, slacking around snacking and playing videogames, while Nadja is half transformed, her rabbit ears shrinking, a muffin top forming, her overall towering height lowering and arms forming on her sides. While Erdene seems to have noticed the mochi cakes may be to blame, but just after she took a bit of it. Too late for you now :V
2º viperwing Simply asked to be Jinakofied taking a nap wearing a Gliscor onesie, which of course now in her Jinako form has some trouble covering her belly.

3º LyhokoLeaci asked for a fusion of both their characters Leaci and Yuuno, I guess this may or may not have been caused by the cakes? She is definitely wearing Jinako's Servant outfit though, but I wonder what caused the fusion.

4º infuscomus asked for both of us wearing matching Snorlax pajamas, already Jinakofied, just slacking and snacking, playing videogames then taking a nap, we don't even need to change clothes! ... Well... Maybe infuscomus should, those are my old pajamas after all, I they may not be very tidy.

5º Mad-Hatter-Ison simply asked for themselves Jinakofied, playing some cuphead while "multitasking", having an extra set of arms makes it really easy to have some food on two hands.while you play videogames with your other set of arms.

6º TheNexus29 asked for a pic of their character Norah, like Madison, Norah is just slacking around, apparently talking to me off screen, Norah did have quite a laid back look though, so I can get why things wouldn't change much for her.

7º IrateResearchers asked for a lil' sequence of their character Xavi, and now that I think about it, the only fully male character we get to see in this batch, quickly squishing down into lil' short fat Jinako, she looks a whole lot happier though. Or maybe it is simply that I never got the impression Xavi was a happy chappy.

8º SlayerEndX13 asked for Jin from Avatar The Last Airbender to get the Jinako treatment, wearing a Cheongsam dress, which tend to be quite tight, so it may not be the best idea for her type of figure, unless of course that was her plan all along :v