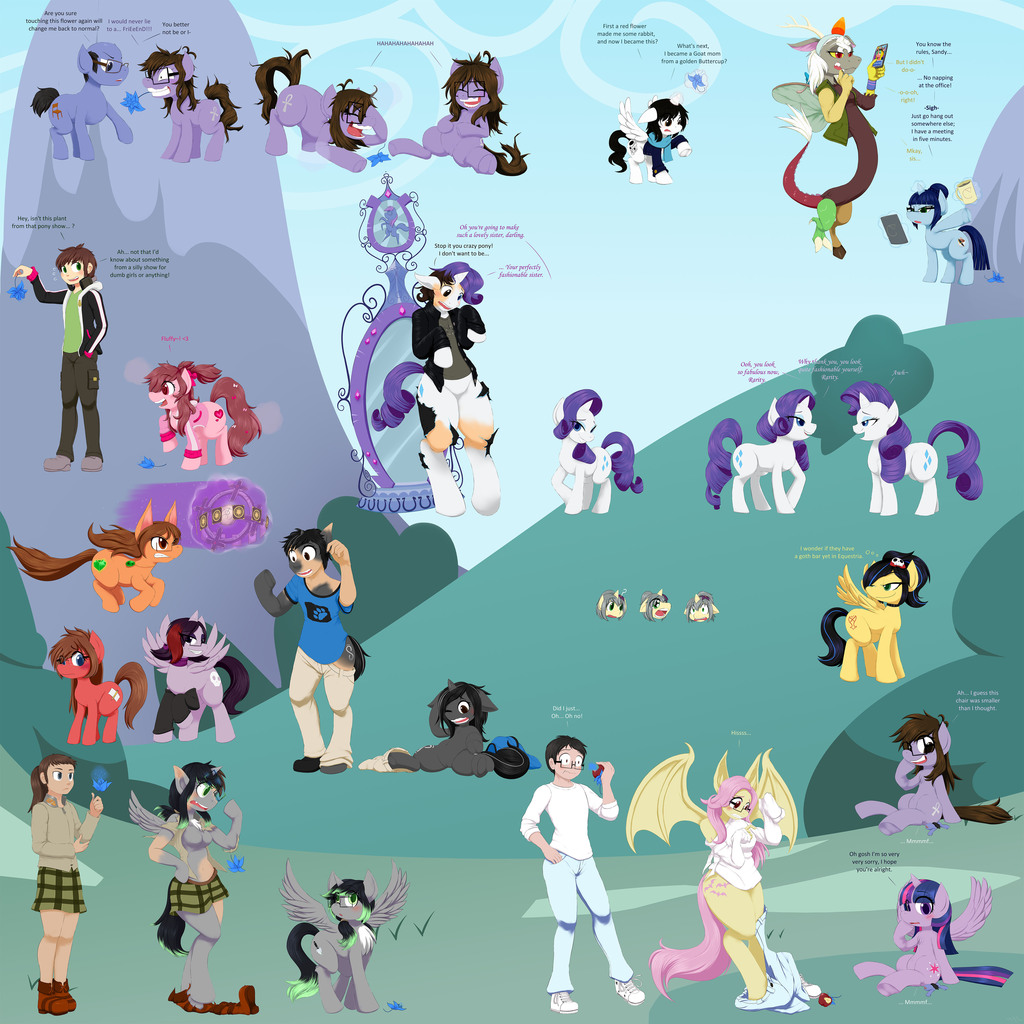 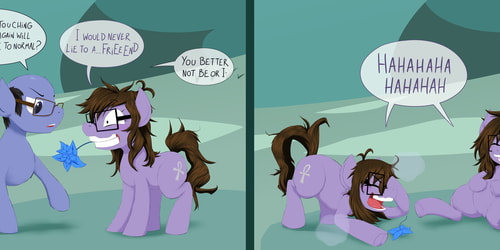 It's Pony time at last! I guess this particular event had been a long time coming. A lovely cutesy Stream Batch this time, and it went by quite smoothly.

And the 18th of the AGW Events, the previous ones being:

A nice variety of characters this time, mostly ponysonas, amongst which you can actually see mine.

1º infuscomus the first picture of this batch infuscomus getting handed... Mouthed? A Poison Joke by me, I'm looking kinda crazed what's up with that? Whatever the case, instead of turning him back into a human, he just turns into a clone of me :v
Wait, what is his cutie mark a chair?
2º Mad-Hatter-Ison turned into an alicorn! I guess a smol one? It wasn't really intended, but she ended up looking considerably young :3c Goat Mombod Madison does sound sweet tho, better than skeleton for sure >:3c
3º Redmond17 commissioned the Reswald sisters, with Sandy turned into a slightly modified Discord, with some Sburb bits you may recognise from a previous pic, and Brittany quite simply into an unicorn, it seems like Brittany may have not even realised she's now a pony, too focused on work, and I guess she hasn't even considered Sandy may have been behind it. What is Sandy looking at? It looks familiar.
4º DismalDetractor suuuuuuuuurely didn't know anything about My Little Pony, of course not, why would he ever be interested in such girly things? Which of course means he'd turn into the girliest mare you could imagine, with hearts cutie mark, a long and fluffy mane filled with ribbons and a whole palette of different shades of pink.
5º - SFW - theheroofdarkness got Rarity... Rarityfied? Became Rare? Medium Rare? Ah, whatever, stepped through a mirror Portal into Equestria and was greeted by Rarity, turning into a clone of her, doesn't she looks just delighted? What's better for a narcissist than an exact clone?
6º BunnehWyld got ponyfied, she's usually a rabbit, which I guess explains why she got to keep the pointy ears? And apparently the cause this time was a Star Globe, which she agressively chases after.
7º Agent-Eckswhy got ponyfied into an Earth Pony mare, while their character Vanessa gets to be an Alicorn! That darn Vanessa always gets the better part of the deal :V
8º Masterhand0000 Quite simply got turned into a unicorn mare, falling on her butt while having a bit of trouble getting out of all those clothes.
9º Jaker17 quite simply asked for a few Chibis of their ponysona Mercury Shine, to go with the ones they got in the previous stream batch.
10º CorruptiveJade quite simply asked for a pegasus version of their character Jade. She's certainly quite happy with being a poneh.
11º Tharkis got their scotsman adventurer Tharkis TFed into a smol alicorn, I guess mid step is anthro? It didn't matter that he dropped the Poison Joke by then, it was already too late, can't escape the fluffiness >:3
12º theyellowcoat took a bite of an apple without realising it had a Poison Joke attached to it, turning into, hey, good point, the only Anthro of the batch, Anthro Flutterbat, I guess with the proper shy personality. Still trying to get out of his... Well, HER clothes :v
13º - 1º, 2 - infuscomus finished the batch with another couple pics, I guess this kinda explains why his pony version has a chair cutie mark, this one in two versions, my ponysona and Twilight Sparkle, but both of us getting to sit on tiny tiny infuscomus, did he get shrunken or are we gigantic?