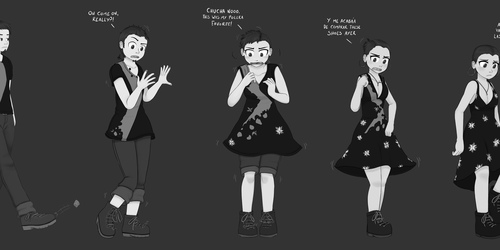 Second page of my entry for the Twinning Contest at TF-TG-Contests: https://tf-tg-contests.deviantart.com/journal/Twinning-Contest-600-Prize-Pool-1-Week-Left-738473019 again reminding you if you're interested in entering the contest you still have a few days left.

The idea sort of sparked for me, considering the whole world gets filled with Reis during the Third Impact scene it was good material for a twinning comic, I've seen twinning artwork of Evangelion before, but it was just a few illustration without dialogue. Since I always prefer the characters to keep their memories after being transformed, the final panel is a good rendition of what would happen afterwards, Gendo might seem as stern as usual, but considering Rei was basically a copy of Yui, he wouldn't really be upset about it. Ritsuko seems to be the most obviously happy, just some Dye and she'll look just like Yui, would Gendo be alright with that though? And then there's Asuka of course, I mean of course she wasn't going to take it well.