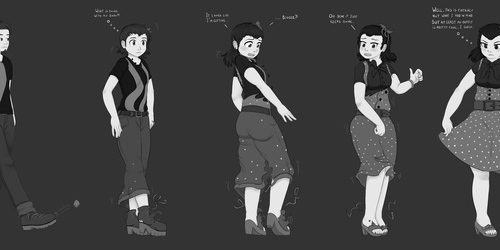 Commissioned by https://kyria-zephyrea.deviantart.com/ thank you very much for commissioning! The pic stars both Choi Bounge and Kim Kaphwan from The King of Fighters, except this time they are in their Midnight Bliss forms. You can thank Dimitri Maximoff for that.
Both transformed characters are wearing very traditional-styled chima-jeogori hanbok, a reference to their Korean nationality. I believe it's particularly uncomfortable for Choi Bounge, the little one, since she's usually a dangerous looking bald guy with claws who resembles Freddy Kruger, while Kim Kaphwan is more of the heroic good looking martial art fighter.

This pic took several more days than I expected, it does obviously has a lot of work put into it, but I've also been feeling kinda unfocused due to sleeping patterns these days, very unfocused, I'd often try to wake up at a normal hour then feel that burn on my eyelids and just an overall tiredness just two or three hours later, like if I hadn't slept in a whole day. It's why I didn't end up streaming the background bit of this pic like I initially wanted to.