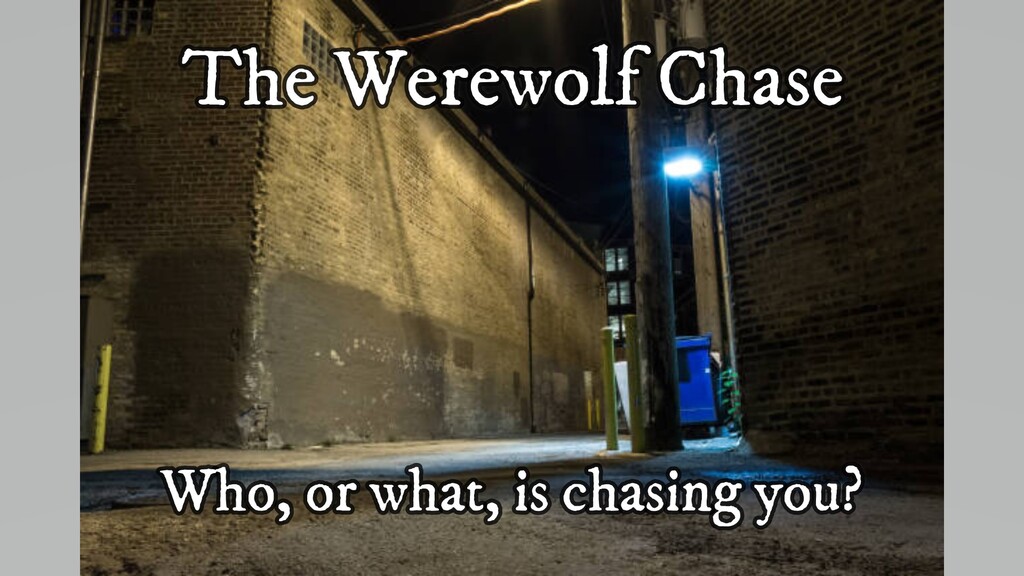 The Werewolf Chase
By: Lu-Man
You can listen to me read this to you on my YouTube channel:
https://www.youtube.com/watch?v=FAcKF8qcSz4

“So, you didn’t like the movie,” Gray asked. His pointed ears were tilted back in a half question
half begging position. His top lip almost quivered. It was their third official date, but he wasn’t sure if
he was any closer Frankie than when their first date.

If she picked up on any of the clues of his nervousness, his lip, his ears, the way his shoulders
almost slumped when she made her joke, then she wasn’t showing it. Her tall ears peaked out of the
brim of a fedora that was pushed to the back, showing off her dark curls beneath it. “I didn’t say that”
she pushed her hands into her jeans, walking slow and deliberate, tapping each heel on the ground then
toe, in a half dance to a song that only she heard.

“What was wrong with it,” Gray mumbled. Werewolf Apocalypse was one of his favorite movies.

The blood, the story line, each one on screen delivering good performances for a cheap horror movie.

The werewolf was even a convincing werewolf. Instead of just hiring some muscle bound Adonis to
snarl in the camera and act feral for ninety minutes, they constructed an entire suit, out of foam, fur,
and of course, lots of fake drool and blood.

“It’s just the concept, really. ‘Oh no! A werewolf!’” she mocked, throwing dark furred hand paws
in front of her muzzle, as if to ward off the invisible demon. “So, what is a werewolf anyway? A
stronger, taller version of a wolf? How would that work? Isn’t that just a wolf that works out?”

They walked in silence for a bit down a sidewalk in the sleepy city. The sun had set, rain had
moved on and the streetlights were starting to blink into existence one street at a time. This side of the
city wasn’t the best. It wasn’t dangerous, but the buildings were a bit older and cheaply made. The
streets were cracked and worn.

“I guess,” Gray mumbled, his ears folding all the way back now. He glanced over at the parking lot
across the street to hide his disappointment. A thin brown tail tucked between his legs for a moment as
he looked at the asphalt. The lot was nearly whited out from the lights. It was mostly empty businesses.

It had one running, a gym that had a few beings on treadmills facing the windows. Endlessly running on
a track that went nowhere. “I guess that makes that a werewolf factory, huh,” He said with a slight wag
and an ear tilt.

“Wha,” Frankie asked. Her cell phone was held in both hands. She had been hastily typing out a
message to someone when he made the statement.

“Ha!” he laughed, his ears spreading into a grin. “I bet there’s big buff wolves in there pumping
iron, then their eyes turn red and they run outside screaming ‘I smell blood!’”

They both laughed at the joke for a bit, their laughter trailing off in the natural sigh of relief. “I can
see the movie means a lot to you. It was done well. I just don’t get the concept of a werewolf.” She
leaned into Gray and attempted to slide her phone into her pocket. It dropped and skittered on the
ground, missing her pocket entirely. A clatter both heard, but neither but took any notice of.

“It’s about the primal fear of prey species,” Gray said, rubbing her arm a bit. “Well, the fear we all
have, really. I think the myth originated before this country was founded. Small towns in Europe used
to get raided by Vikings and the like, and well, how scary would a massive, buff wolf be, wielding a huge
battle axe and covered in blood?”

“I suppose I get that,” she replied. One ear rotated backwards for a moment, picking up the soft
sounds of paw pads and claws on the sidewalk. Someone was following them. Barefoot. She
unconsciously picked up her pace, forcing gray to do the same.

Her voice had a slight tint of panic in it. Her scent had begun to change, from the warm loving
scent he grew to like so much, to the slight bitter sweetness of fear. “Come on,” he rumbled, his own
ears tilting around to try and catch what hers did. “I can hear it and smell it on you. What’s up,”

“Damn canine nose,” she grumped. “I think someone’s following us.”

He hugged her tight. “Well, bun it is a public sidewalk. Maybe he’s going to McCarver’s or
something?”

“Please, let’s walk just a bit faster.” She whispered to him. He complied, and picked the pace up
with her and held her close as his ears continued their search. Soon they found it. The gentle whisper
of paw pad on concrete.

They had come upon an intersection. Normally he’d walk straight down the street to the next
intersection and hang a right. Now, he cut right immediately, picking up a slow jog. Frankie had no
trouble keeping up, her large Lapine legs propelled her forward fast, her thin ears pinned backwards in
near panic.

He ran to the left, giving her wrist the gentlest of tugs. She dashed left next to him, picking up a
near panic run, “he’s gaining…he’s chasing,” she mumbled. Indeed behind them, Gray could hear foot
paws pounding upon the pavement and asphalt. They both ran behind a restaurant, the scents of Asian
cuisine mingled with the bitter tang of garbage, leaving an acrid taste in both of their mouths for a
moment before the delicious smells of fresh food washed it away.

“Come on!” Gray shouted as he raced down a parking lot and across an alley, barely looking to see
if it was clear. The foot paws behind them was gaining on them. Now running harsher. He could hear
his breathing, and loud, angry growling.

“We’re not gonna make the apartment,” he mumbled, coming to a stop. They stood behind a
shopping complex. A line of trees pressed against a small gravel road behind the buildings. Slate white
roll up doors and beige steel back doors greeted them both. “Shit, shit, shit,” he growled, looking
around.

“Here, hide,” She shouted, then tugged him downward behind a dumpster wall. Their breathing
was labored, coming in huge snatches and gasps. They tried to bite back each breath, hold it down, cut
it off while they waited, less their panting gives them away.

Behind them raced the largest wolf that either Gray or Frankie had ever seen. His shoulders was
massive, with a huge head that dripped with foam. His eyes were blood red. He wore a small trench
coat that did little to hide his gleaming white fur. His hand paws clenched and unclenched in the light,
each finger ending in a claw that seemed to glisten in the thin light in the alley.

Frankie grabbed her muzzle and suppressed an ‘eep’ as his nose began to work, sniffing. He bent
to the ground, taking three large whiffs. His head turned this way and that, before his eyes turned
towards Gray. His blood red eyes locked onto Grays, drool dripped down from his open maw.

Gray’s veins turned to ice water as he stood. “Get ready to run,” he whispered down to Frankie.

“What the hell do you want?!” Grey shouted. Trying his best to sound intimidating.

The white wolf held up a finger, then placed a hand paw on his knee. He reached into his pocket,
and pulled out a scratched up plastic square. “…Phone?!....” He gasped in between breaths.

Gray looked down at Frankie, who patted around her pockets. “Oh shit.” She mumbled, standing
up. Her ears folding down in embarrassment. She stood and sheepishly walked over to the tall white
wolf and took the phone gingerly, slipping it into her pocket. “Thank you,” she mumbled. “Though,
you’re an asshole for scaring us.”

“Sorry,” the wolf said as he stood, looking down at Gray and Frankie. His mouth was still open,
gasping for air. His tongue lolled out. “I was leaving the gym and I saw it fall to the ground. I was going
to shout at you, but you took off before I could say anything.”

“Still,” She glared, “I don’t have to pee anymore thanks to you.”

“Oh, I love that movie!” The White Wolf exclaimed. “I’m Charles. Everyone calls me Iceberg.”

“Why does everyone call you that,” Frankie’s tall ears tilted forward, her muzzle wrinkled up a bit
in confusion.

“Well, thank you for my phone.” Frankie said, her voice still holding a bit of embarrassment.

“You’re still a jerk for scaring us. Though, we can probably forgive you if you come hang out sometime.”

“You down for seeing Werewolf Apocolypse again,” Iceberg’s ears perked up, his face became the
picture of anticipation and joy. It was like almost staring at the McCarver’s poster with the child canine
looking up at his father’s cheeseburger.

Gray looked down at Frankie. She smiled; the embarrassment gone. “Sure, how about next
weekend.”

“I’ll text you my number, I guess” Iceberg mumbled pulling his phone out.

As numbers were exchanged, and messages sent. Gray laughed. “I swear, for a moment, I felt like
I was being chased by one of those werewolves from that movie.”

Iceberg’s face lit up again. It was the picture of innocence. “Really?! That’s my dream job, to be
an extra as a werewolf in a film.”

Frankie just rolled her eyes, and said with her ear cocked in a smile. “Figures.” 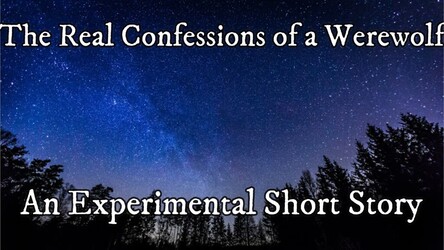 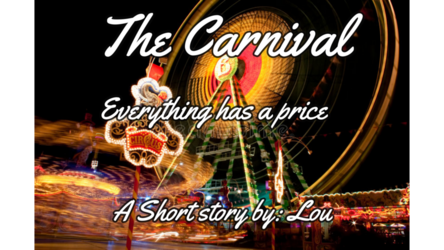 Gray and Frankie find themselves in a race that might be for their life after seeing a popular werewolf film. What will the one chasing them do to them if he catches them?

This story is also on my YouTube channel if You'd rather listen to it: