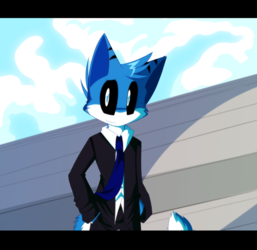 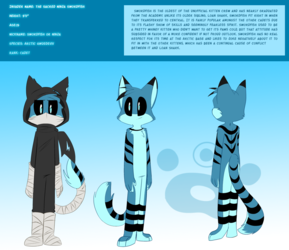 Nickname: It refuses to acknowledge nicknames

Appearance: Arctic Fog is sort of the definition of fluffy. It is incredibly furry; particularly its tail, lower legs and forearms. Its fur is simply white with black ear tips and a few black accents. Its eyes are black with white pupils.

Personality: Arctic Fog has always maintained a reputation of being skilled and valuable as a soldier. Arctic Fog is quite loyal to the Qwuedeviv species and does not like other species at all. It is a fairly quiet Qwuedeviv, mostly because it will avoid speaking to those it views as unworthy or that it feels itself to be unworthy of. Arctic Fog never seems to be in a good mood and it never seems content to be doing whatever it is currently doing.

It is not social at all and never has been. It is very goal oriented and driven to high success. The overly critical Qwuedeviv rarely recognizes the skill of itself and others as being adequate. It comes across as rather unappreciative of others, proud and cold—none of which are a stretch of its personality. Beneath all of its perhaps, less admirable traits though, is a Qwuedeviv struggling and striving towards being something better. Something it isn’t even sure it’s meant to be.

Background: Arctic Fog was commissioned with a stealth squad on Qwuedanjj, however, the others quite literally vanished as far as it knows. The few who remained were later captured by enemy forces, leaving Arctic Fog as the last of the squad. Rather embarrassed by their overall failure, it insisted that it couldn’t return to the Qwuedeviv and fled to the snowy mountains, fully knowing that it would be considered the wrong decision. Qwuedanjj’s Qwuedeviv forces however, did not seem interested in hunting it down to speak with, that or perhaps they had forgotten about it all together.

Arctic Fog still investigates as a stealth unit on its own with no official orders however, with intent to get to the bottom of what happened and recover the rest of the squad. It considers itself disgraced, much like the Qwuedeviv who were shipped to Qwuedanjj from Tuul, although no one has officially stated such. Most think it was either captured or otherwise vanished as the rest of the crew did. The few Qwuedeviv who have made contact with Arctic Fog have been clearly informed that it does not wish to speak with them and if they do happen to venture out and visit to see how it’s doing, beyond a simple acknowledgement of their existence, it will say nothing more.

Arctic Fog is adept at living with minimal resources and shelter, allowing it to frequently move to new temporary homes amongst the mountains. It is convinced that the Qwuedeviv will only welcome it back if it single handedly completes their mission. Having run alongside its rather well known parental unit has left it feeling quite inadequate and much like Shark, a disgrace to their memory.

Arctic Fog eventually—and very unintentionally—crosses paths with Crew 52 at which point it feels its life is done. It has failed its mission, abandoned the Qwuedeviv and its family (at least in its mind) and then finds itself standing before its younger sibling, a brother it hasn’t even been there for.

Facts:
Arctic Fog loves the snow, but will easily overheat from all its thick fur in even moderately cool temperatures elsewhere.

Arctic Fog is an older sibling of Loan Shark’s.

Unlike most Qwuedeviv who wear some kind of foot covering to protect their sensitive feet, Arctic Fog goes without. Its feet are quite tough and well insulated to protect them from snow.

All three siblings are much more alike than any is willing to admit or credit. All seem to feel the stress and pressure to be as incredible as the legendary Hailstone, their ‘father’ parental unit, and likewise, each feels it only brings shame to such a great Qwuedeviv’s name.

Arctic Fog feels responsible for ruining its family due to being unable to take care of its younger siblings after their parental units were killed, later deeming itself weak and soft for being blinded by mourning.