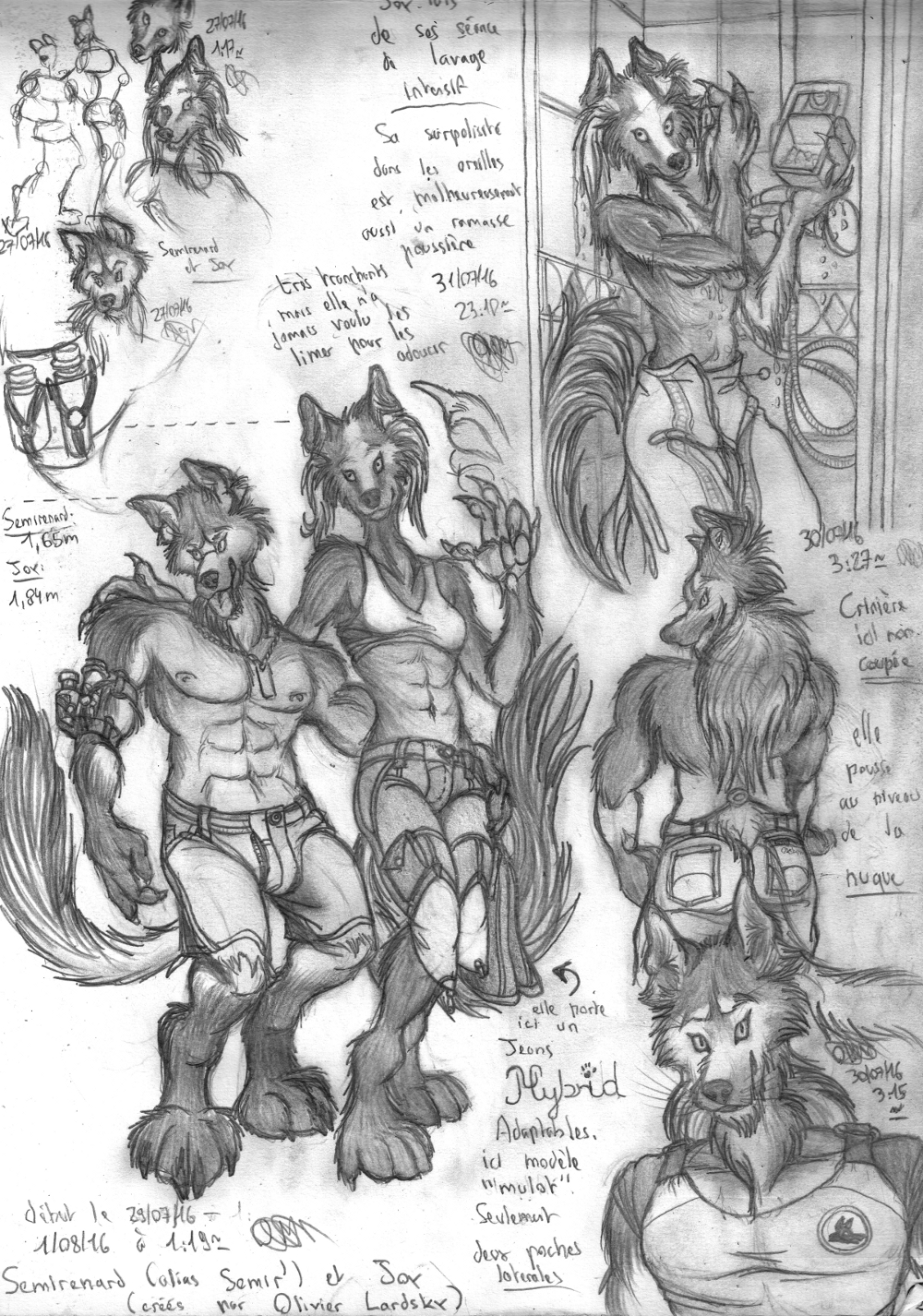 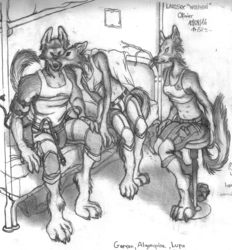 I know theses Animals species aren't interbreeding, but these two characters were both born from drawing's error of mine, and i decided to keep these characters as they are...

Let's go with two hybrid's of my GMAs (Genetically Modified Animals as they are named in my comic).

--> Semirenard (CaniVulbipedis lupus felicis):
Or Semir', Was born from a GMA German Sheperd and a GMA Vixen. He has miraculously survived his own birth, born when no one was expecting him. He survived despite his very weak state of health, here is the reason for his binomial nomenclature, 'felicis" meaning "lucky".
Today he still is sort of a big baby (5.4134 ft), who must regularly medicate himself and constantly do physical activies (obvious body-building here), in the purpose of keeping his health as much stable as possible. All of this didn't kept him to impose himself as one of the big muzzled GMA of the whole laboratory. He is also very dominant aside his peers.
He never met his father (the German sheperd of the one night couple who gave him birth) and his mother rejected him. Giving this, he grewn up mainly among humans and there still remnants of this on his mindset (by the way he willingly ironise about us when the occasion is gived to him).
The only relation he will ever have with family relatives of him will be with his "brother-in-law" Finerenard (alias Fine'), who is a GMA Fox.

He prefer to target persons (human or GMA) equally strong or even stronger. There's is something a bit more human in him, less instinctive and more calculating, who make him also sympathise with less dominant personalities, making sure that by being some sort of protector for them will avoid them to be potential obstacles for him in the future.

He was choosen at his 15 years old (human age) as one of the test's GMA assault team leader. He is tasked with leading this group for a test assault on the field. He now have the essential mission to rule all of his humanimal comrades to an -uncertain- success, trough numerous and sometimes impressives "impregnation's session" (when he sometime have to bite or simply beat the disobedient elements). He sort of succeed to reunite a team of various individuals around him with GMA Foxes, two females dog, two GMA wolf, a Lion's couple (the male give him some worries but without making him give in).
This show that even when small, having a sharp toothed big mouth and be capable of using it can make the difference for theses creatures.

He got the following "GMA indicative" (sort of position allowed to the GMA's depending on their abilities). LgtAssault (Light Assault), BdyAssault (Close combat and Hand to Hand), Interface GH (Animal link between humans and GMA's), and the rare "commander" indicative, referring to the most confident and intelligent of the GMAs (we can talk about an aptitude for conceptual or abstract intelligence close to human intelligence).

He is, what we name a "mute GMA". He don't have the physical ability to talk, he know sign language but can barely write, this is why his assault team include tree female GMA (wich he'll not try to dominate) who can actually communicate with us. When in presence of human-beings, he tend to rarely go away of them for that reason.

--> Joy (Canibipedis lupus mephitis) is a more improbable half-Wolf and half-Skunk hybrid who was born on the wild, she was adopted by a British family settled in France. She have the ability to talk and learned a pretty good English.
She lived hidden among her human family the first years of her life without having any attention from the public, she broke her anonymity when the GMA's where brought to the attention of the French population (at this moment the GMA's had to be officialy declared to the French state). She was fast approached by a clothes manufacturer and his slightly eccentric creator accompagnied by a cruel lack of exposure. She became their egerie for a new line of "3-in-1" jeans, wich was named "Hybrid" as an homage to her. Here begin an always growing success thanks to her "natural" originality!

She is one of the first female GMA (or FeMA as they are often called to "unanimalize" them a bit) to obtain a French ID card. The first GMA to ever got one are a bunch of GMA dogs who are linked to the French army. Most importantly, she became the first GMA who enter a publicity campaign and gain mediatized success from it. She seems to have fairly understood how media function, how to be photo shooted...
His determined and kind but still enoughly solid temperament help her a lot to fit on his job!

His hybridisation don't give her health problem on the strict sense, her badly adapted teeth force her to avoid as much as possible hard meal as some meat (etc...) making her eat more skunk like foods. A over-hairiness begin to appear some years ago on her very ears. However this particularity give her an odd charm, so well that she now rarely completetly got rid of it but does clean it very often and meticulously. She also inherited of the Skunk claws, whom are very sharp here, that gives here somes inconveniences for physical contact with other peoples. It's sometime hard for her to have any contact without tearing apart clothes or accidently scratch someone (making her a bit maladapted for "Free hugs").

She almost seems to be a giant with her 6.0367 feet when rivaling with the Semir's 5.4134 feet...the difference is more visible when Semir' stand aside of the GMA fox Orthémon and his 6.7257 feet!
She don't have any "GMA Indicative", since she wasn't born on the "A" Laboratory.

ADDENDUM: What we call "impregnation's session" are session (involving various species generally) where individuals who have to to collaborate or be in the same group or team meet themselves. The social interaction observed on these meeting can be either friendly or antagonistic, but this is important for them to communicate with a common language between the more humanised GMA's and thoses who still have a more genetically animal behavior. Theses sessions (inspired by the functioning of the wolfpack in animals parks) also give the possibility to observe each individuals apart and learn to better understand their own functioning.

There still a lot of work (anatomy ,...) and i have to do better with my pencil rendering skills (and not to leave sketches on the very page) but here is more to come and this is a good mean to work on my creatures.

If you read it all and don't understand something or see spell(s) of any nature, don't hesitate to let me know. English isn't my mother tongue but i try to do my best to write an not too simplistic one.