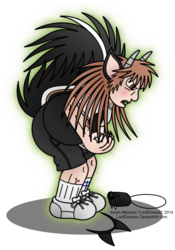 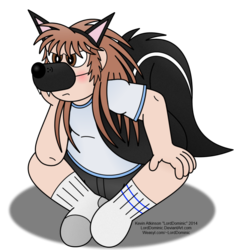 Skunk Boy wielding his custom assault weapon, the "Mephitine Stomper".
It's a fictional firearm with quite a few real-world and fictional influences, and in usage is roughly equivalent to an M-249 SAW or similar light machine gun. The arched back and black color scheme are meant to give the weapon a skunk aesthetic, and much like a skunk, its spray will clear an area pretty quick.

So... Strong points on this one:
-Really liking the gun itself.
-The recoil action is actually pretty decent looking to me.
-The little ejected shell casing is a detail I am proud of. The ejection port even opens when the gun is firing!
-It's a combination of a few things I have wanted to do for a while: another simple animation, a gun animation, and a visual depiction of the Mephitine Stomper.

And a few weak points I can acknowledge:
-The biggest one that stands out is that the recoil effect is restricted to his gun and arm. I actually stood in my room and practiced like I was holding the gun, and the motion of recoil did seem like it would mostly be restricted to my arms, but some other indication of recoil (like his tail moving or something) would probably have helped.
-The bullet casings despawn too quickly, only visible for one frame.
-Got a bit lazy with the muzzle flash and just used the same one repeatedly instead of adding a bit of variation or something.

Still... Everything went better than expected! Maybe at some point I will make a second version that improves on those weak points.