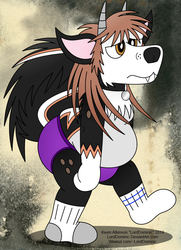 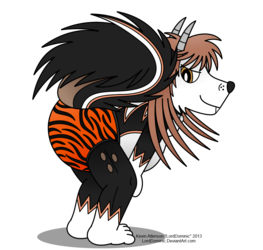 A collection of three pictures of Dominic, my hybrid "Horned Skunkdog" fursona, from 2013. Instead of submitting them all individually, I decided to combine them into a collection of sorts for posting here. I will link the original, single pictures on their DeviantArt pages for anyone that is interested.

The first picture is pretty much my first picture of this fursona that was fully dressed (the very first was simply in his underwear, since I was designing his fur patterns and such). He's a hybrid of a few other, older fursonas I have used over the years. Rumors that he's Skunk Boy transformed into an actual skunk beast may be correct but officially we can neither confirm or deny this.

The second is a picture of him in his battle gear, charging one of his attacks. If there's one thing that has remained the same over the past few years despite all the changes to the character that bears the name "Lord Dominic" (besides the blue trenchcoat and sideburns) it's his signature attack, the Shadow Bolt. A powerful beam of energy capable of cutting through most foes with ease, the attack is fired with one or two fingers and is surprisingly quick to charge up, requiring only a couple seconds to gather the energy necessary to fire a sustained beam capable of blowing a hole in just about any target.

The final picture is another "fight" pose. It might be surprising to see a skunk ready to fight rather than turning tail to just spray and run, but if they are built like this guy they can probably do quite a bit of damage.