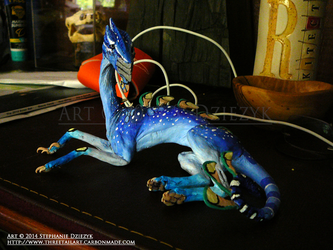 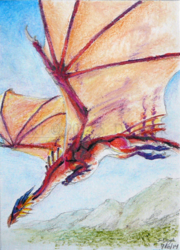 Sneak preview of the sculpture I've been working on for the past couple of weeks in my spare time. Just attached the wing with the bits of clay on it, and it was originally fully covered in a layer of clay, but had ended up being too heavy for the supports I gave it, leading to sagging. So, I've got the idea that I'll omit any clay on the wing membranes, and instead covering them after baking with maybe something akin to paper mache or some sort of thin material, like wax paper, to be able to paint them with the appropriate colors.

This sculpt is the culmination of a lot of techniques I've never really been able to pull off successfully, including most of all a solid stable base for anything larger than an inch, as well as the fact that the dragon is only attached to the base through one contact point, requiring a lot of support structure to maintain its balance and stability. It's still very ramshackle, with a lot of jerryrigging, but I'm hoping that it will stay together as I've planned it. Here's hoping!

Media: wire, aluminum mesh, bits of metal for the base, more wire, Super Sculpey and Sculpey Firm, a bit of floral tape (testing its efficacy, and sadly the roll I bought seems to be crap for what I wanted to use it for. Oh well!)