Just a random fursuiter that was brought into the fandom by anime cons.

Cynder is my main girl and was made by Drakonicknight on FA. I do not own the character,just the suit.

Spyro is my cutie pie and was also made by Drakonicknight on FA. I try to act like a guy with him, lolz. I do not own the character, just the suit.

Ziggy is my dead dog partial, I love her, but rarely wear her because of her look (furcons PG-13). Maker was Mushimagicsuits on FA.

Entei is my newest one (feb 2013) and like the name states, she is a Pokemon. Unlike the real Entei she has a longer muzzle, which is why I made her a girl. Maker was Sharpe19 on FA and Weasyl. I do not own the character, just the suit.

I knit scarfs on my free time~ 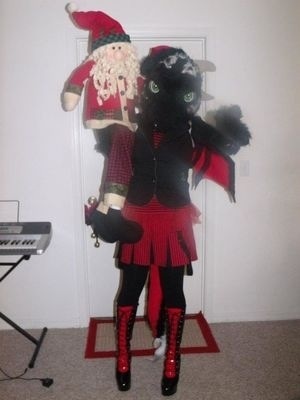 I forgot I made a Weasyl XD

Title pretty much says everything XD...Im slowly catching up on my submissions on FA and saw everyone posting about Weasly, so decided to check it out XP. Im slowly gonna start posting pics on here as well as on my tumblr too (havent touched it in ages XD)